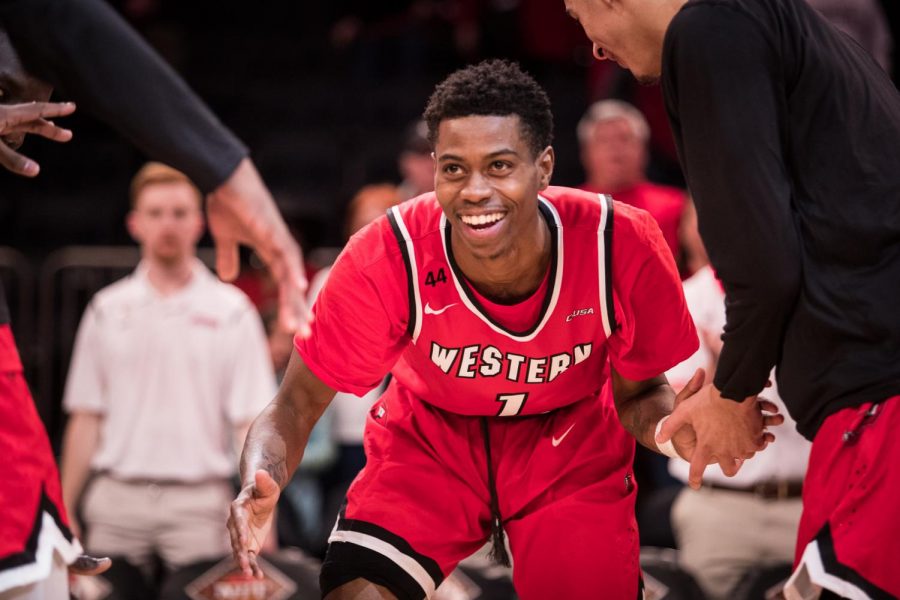 WKU guard Lamonte Bearden is introduced before the start of the the semifinals of the NIT Championship in Madison Square Garden on Tuesday night. WKU lost 69-64.

To watch Lamonte Bearden play basketball is to watch him as a person. He goes through his legs, he goes behind his back, and he sometimes a pass for an assist that shocks even his teammates.

One of those moments came on Sunday, when he found junior wing Jared Savage, who made a wide open 3-pointer to ice the Hilltoppers’ victory over Southern Mississippi in Diddle Arena. Sophomore guard Taveion Hollingsworth marveled at the pass after the game.

“I don’t know how Monte seen him honestly,” Hollingsworth said. “I probably wouldn’t have seen him.”

It hasn’t always been smooth sailing for the senior guard, who transferred to WKU from Buffalo, but late in his final season on the Hill, Bearden is playing some of his best basketball. On Wednesday, he’ll play his final game in Diddle Arena, which he said he expects to be an emotional experience.

“My emotions are gonna be high and I’m pretty sure everybody else’s is too,” Bearden said. “But we’re gonna treat it like a normal game and try to come out here and get the win.”

It’s a senior season that wouldn’t have happened if things had gone differently. For starters, Bearden, who won two conference championships at Buffalo, got to WKU in hopes of a second chance after two failed recreational drug tests.

He had a successful junior year with the Hilltoppers, averaging 11.8 points and 3.4 assists per game for a WKU team that went to the National Invitational Tournament semifinals at Madison Square garden

Following that year, he declared for the NBA Draft. He decided against that, and returned to school to almost immediately find himself academically ineligible until December. Even Bearden’s teammates were frustrated with his attitude and performance.

“We told him, ‘You got to get your stuff together, man, and understand that we need you on this team,’” freshman center Charles Bassey said after WKU played Texas-El Paso earlier in the season. “So right now he understands, he knows that we need him, he needs us.”

The time spent not playing had an effect on Bearden.

“It did give me a chance to sit back and re-evaluate myself and look at the season and mature a little bit,” Bearden said. “And become the leader that they needed me to become.”

“For him to be in this position now to get his degree,” head coach Rick Stansbury said, “he’s down to 12 hours to get it. That’ll be something where it’s five years, 10 years from now, he’ll look back on, will really be important to him then.”

“He’s playing his best basketball of his career,” Stansbury said. “Correlation. You know sometimes that light comes on at the end. That light’s on now, ‘cause you can see at the end of the tunnel. You’re down to one game in this season, every game after that’s your last game.”

Now down to the last game of the regular season, Bearden seems to have found his balance between the joking, fun-loving person and player he likes to be, and the point guard that the team needs. He’s averaging 4.2 assists per game, and Stansbury said that he likes the way Bearden’s game has changed.

“It was a balance,” Stansbury said. “Gotta let him dribble that ball between his legs a few times and back and forth, that’s who his personality is. As long as it don’t affect the team, his play, then you gotta let him do a few things that he does.”

While the next month will see the end of Bearden’s college career, he said that he plans on continuing to play basketball in the pros.

“High hopes,” Bearden said. “Hopefully I can do this one day.”

Bearden will look to close his final regular season with a win over Texas-San Antonio. The Hilltoppers and Roadrunners tip off at 6:30 p.m. in a matchup that the Hilltoppers won in overtime earlier this year.