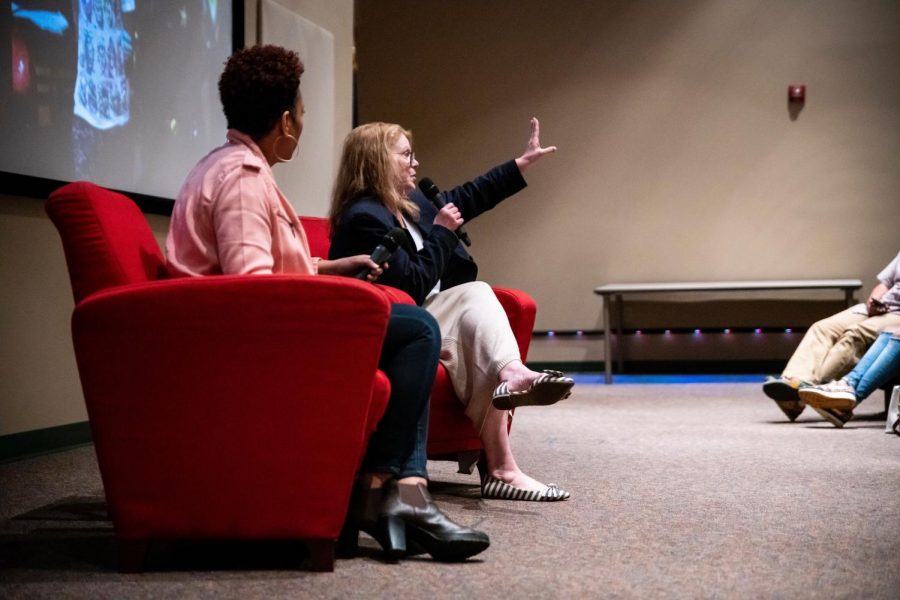 Cara Owsley, left, and Amy Wilson, right, from the Cincinnati Inquirer discuss their Pulitzer Prize winning project "Seven Days of Heroin" to students in the Jody Richards Hall Auditorium on March 20, 2019. Owsley was a photojournalist and Wilson was the story telling coach for the project.

Two reporters from the Cincinnati Enquirer shared their experience reporting on the drug problems in Northern Kentucky and Cincinnati on Wednesday.

Cara Owsley, a WKU alum, and Amy Wilson were a part of the 60 journalists at the Cincinnati Enquirer who won a Pulitzer Prize for local reporting in the story, “Seven Days of Heroin: This is What an Epidemic Looks Like”. The story was published Sept. 10, 2017, and won the Pulitzer in April 2018.

Owsley and Wilson shared their story at the John B. Gaines Family Lecture Series, an annual event hosted through the School of Journalism and Broadcasting that features journalists who cover major news stories of the time.

The piece tells the stories of the people of the drug ridden areas of Northern Kentucky and Cincinnati, and the stories of everyday people who were affected by heroin throughout the week.

At the beginning of the lecture, Wilson described how the story was planned. The entire piece involved 60 reporters and photographers going out and covering the day to day events of heroin in the area.

“I had to have reporters reporting all exactly the same way and these incredible [Microsoft Excel] spreadsheets because there were about 140 to 150 assignments that week and we had to make sure that each hour was covered,” Wilson said.

Reporters and photographers were sent out in pairs to go to different places in the area to see what was happening with the heroin epidemic that week. Owsley was one of the first reporters out the door on Monday of the week they covered.

“One after the other, somebody was coming in, like every other person for probably maybe two hours, somebody had some kind of drug charge or heroin or heroin related charge,” Owsley said about her time at the jail where she started her week.

Wilson and Owsley shared the stories of the people they interacted with as they worked through the week. They also told the stories of the other reporters involved in covering the piece. One struggle they faced throughout the project was how to have a narrative in the piece. However, they found the story of two sons and two mothers on the first day. They called it “The Lost Boys”.

“I had to have a story that took me through every day,” Wilson said.

After the lecture was over, Wilson and Owsley answered questions from the audience. They were asked about the depth of the heroin problem, their mindset during their work, and the opinions of the people in the area.

“The reason why we were able to get in there is because we’d been doing that reporting prior to, and so those relationships are key,” Owsley said. “I think if somebody came in from the outside, they couldn’t got some of the stuff that we got.”