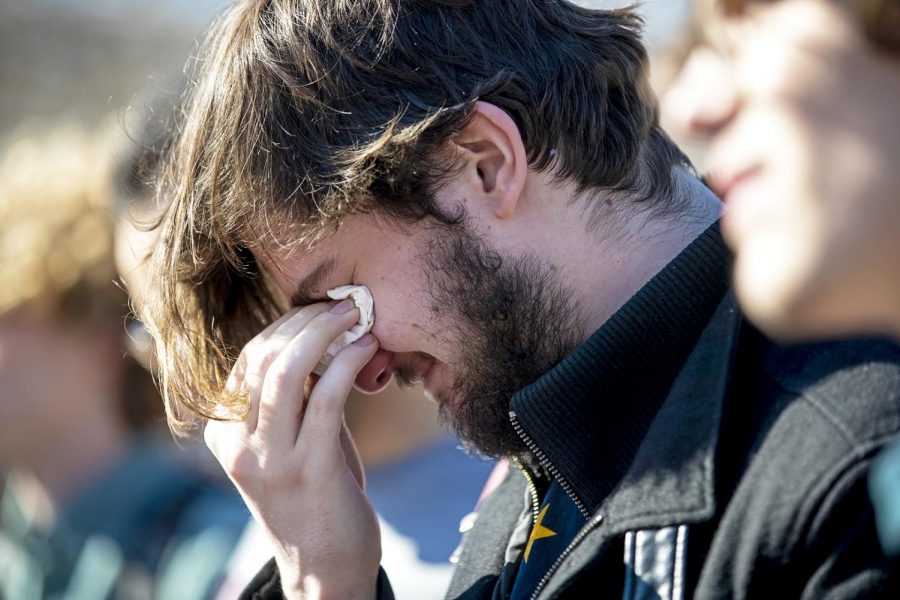 WKU international affairs and history major Daniel Candee gets emotional while other attendants of the vigil read the names of the victims at Centennial Mall on Friday, March 22.

In the days following consecutive attacks on two mosques in New Zealand, members of the WKU Muslim Student Association said there were feelings of fear within the Muslim community.

But there was also an opportunity to unite.

On March 15, 49 people were killed in a terrorist attack in New Zealand. A single shooter attacked two mosques and livestreamed the attacks in addition to releasing a manifesto online.

In response to the attacks MSA held a discussion and a vigil on Friday, March 22, to remember the victims, discuss misconceptions surrounding Islam and unite the Muslim community.

Emily Peña said some Muslims were afraid to attend local mosques last Friday because of what could happen. She said some hijabis, women who wear hijabs, opted to wear a baseball cap instead.

After the attacks, Tithe Ahmed said it initially didn’t occur to her what had happened, but her state of mind worsened as more headlines came out. She said the attacks resonated with her, especially considering she has direct family members who attend Jumu’ah, or Friday prayer, every week just like those killed in the attacks.

“It was our brothers and sisters in faith,” Ahmed said. “It could’ve just as easily happened to one of our families here in America, especially considering this violence being more prominent in America.”

Islam was the second-most targeted religion after Judaism. The FBI reported 938 anti-Jewish hate crimes, which made up 58.1 percent of total hate crimes in the U.S.

There has been an increase of attacks on mosques and Muslim religious leaders in North America, Europe and Oceania, as reported in The New York Times. From 2010-2017 in those regions, there have been 128 terrorist attacks. There have been 213 terrorist attacks on other religious institutions such as churches and synagogues within the same time frame.

“I think that’s the scary thing,” MSA secretary Maryam Malik said as a reaction to the New Zealand attacks. “When we attend a mosque, who knows what could happen.”

MSA was formed at WKU in October 2018. President Hoda Amira said the organization formerly existed at WKU, but after the previous president graduated, it died out. Born in Lexington, where there was a strong Muslim community, Amira moved to a smaller city where a Muslim presence was almost nonexistent during high school. When she came to WKU and learned there was not an active MSA, she said she was insistent to restart it.

“I feel like at WKU there is a strong presence, but it’s not as united as other schools,” Amira said. “That’s what I was hoping to change with MSA — to create unity.”

In Bowling Green and WKU, Ahmed said she believes there is a large Muslim community. However, when she first came to WKU, she said she only saw Muslim students at the mosque. After MSA was formed, she found a community on campus.

“Our goal is to just build up that community to where everyone is friends and we all know each other and the Muslim community knows they have each other at least,” Ahmed said. “Just to have a sense of oneness.”

In her world religions class, Peña said the class recently began discussing Islam. She said she believes the questions people have asked about the religion have revealed just how much misinformation is out there.

“People knew Islam was an Abrahamic faith, but they didn’t know how much similarities we actually share,” Peña said.

In the class’ first meeting after the terrorist attacks, before breaking down these misconceptions, Peña said people shied away from talking about the New Zealand attacks. However, after discussing Islam, she said she saw more compassion from her fellow students after they better understood the community.

In the week following the attacks, Peña said she has seen more positivity, as many people have contacted her with their concerns. In some classes specifically, she said professors have discussed the politics of the event and why people may be uncomfortable asking questions or talking about the attacks.

“I understand why people don’t ask questions, because it’s scary to ask questions about religion and not know the response you’re going to receive,” Peña said. “But we’re also trying to show we’re willing to take those questions and that it’s OK and Islam’s not some big scary thing.”

Now that more people have had that discussion, Peña said it can lead the way for the campus to make progress.

Ahmed said since MSA’s rebirth last semester, other campus ministries have contacted the organization in an attempt to learn more about Islam.

As a convert, Peña said she didn’t have a lot of Muslim friends when she came to Bowling Green. She said having MSA has been helpful in bringing members of the community together.

Khaled Aljaber, an international student from Kuwait, said after observing how the international community and media responded to the New Zealand terrorist attacks, he felt it necessary for organizations and individuals to stand up for themselves and express their reactions.

Aljaber has been at WKU since 2014 and said he has always seen some types of prejudice on campus. However, he said these instances changed in January 2017, as examples of prejudice became more pronounced.

“They’re not shy to be racist anymore,” Aljaber said.

While at WKU, Amira said she feels her experience has been somewhat impacted by the misconceptions people have of Muslims. One example she mentioned was how people assume Muslims are immigrants or exclusive to other countries.

“They just feel like you’re foreign,” Amira said. “They don’t understand that you also belong here.”

To combat these misconceptions, Amira said she would prefer if people approached her and asked questions instead of making an assumption and spreading misinformation.

Amira said the discussion and vigil hosted was a way to recognize the victims but also a way to show that as a community, Muslim students do have a voice.

Ahmed, who was one student leading the events on Friday, explained the events were also a way to unite the community and discuss differences. She said she believes every Muslim experience can be different.

Ahmed explained some differences that may impact a Muslim’s experience are whether or not they wear a hijab and their skin tone.

Before the event, she said she planned to share her story and explained it’s important to share with the Muslim community but also those who may practice other faiths.

“That’s why it’s important for us to come together, so we can have this collective experience, so it’s not just one versus the other,” Ahmed said.

At the discussion on Friday, the Student Government Association chambers were nearly full with students, faculty, staff and community members. The event was led by Ahmed, Amira, Malik and Madeline Springate from the Bowling Green chapter of March for Our Lives.

During the discussion, people addressed media coverage, misconceptions of Islam and Muslims and various other topics. People were also invited to ask any questions about Islam. Afterwards, during the vigil, attendees were invited to read aloud the story of a victim of the attacks.

Among the attendees was state Rep. Patti Minter, who encouraged anyone who feels unsafe to contact her, saying she would be there for them.

“I stand with you, I see you, I grieve with you,” Minter said.

When it comes to the success of MSA, Ahmed said proactivity is important. She said some organizations will talk about action but not do anything. By reaching out to the community and hosting the discussion and vigil, Ahmed said MSA is showing it intends to be active on campus in teaching people about Islam.

“Islam is not a religion that preaches terrorism, that doesn’t preach fear, but this is a way we are trying to be more active in not being passive in the problems that are happening,” Ahmed said.

Ahmed added she believes the people who attended the vigil and discussion showed solidarity and were proactive, demonstrating growth in society.