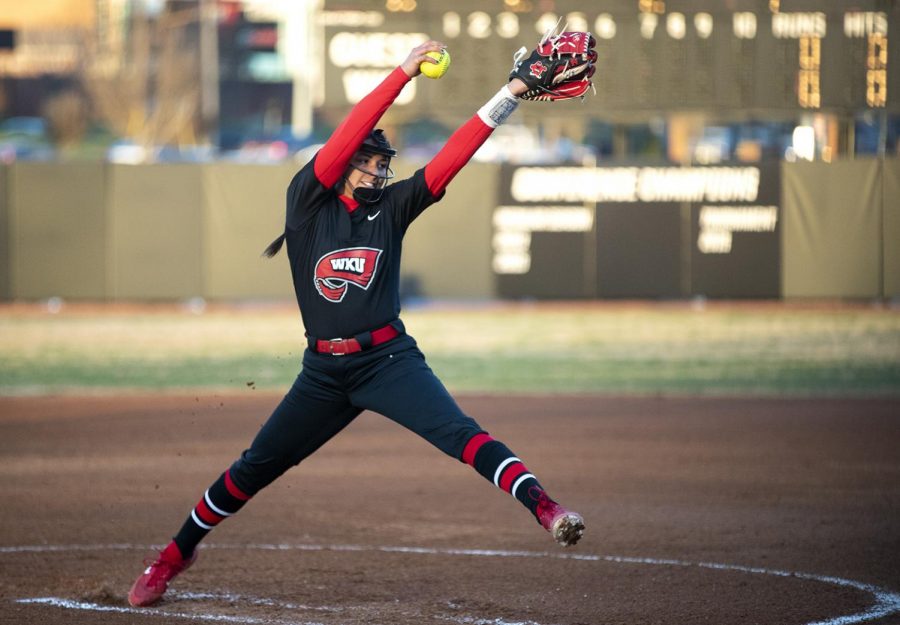 WKU freshman Kennedy Sullivan throws a pitch during WKU’s 9-7 win against Indiana State at the Softball Complex on Monday, Feb. 25, 2019.

The WKU softball team is now 15-4 after traveling to Georgia this weekend to compete in a Kennesaw State-hosted tournament. The Hilltoppers played four games on Friday and Saturday against Kennesaw State, Wright State and Saint Louis, finishing the weekend 2-2.

In its first game of the weekend, the team came back from behind for the fourth time this season with a 6-3 victory over Wright State.

Senior outfielder Shannon Plese recorded her seventh multi-hit game of the season with two of WKU’s six hits. Sophomore Shelby Nunn also earned her second save of the season after replacing freshman Kennedy Sullivan in the circle to close.

The Hilltoppers earned their other win of the weekend with a 10-0 win over Saint Louis in their second game on Friday. Junior Kelsey Aikey dominated in the circle, allowing just one hit and one walk to move her to 2-2 on the season.

WKU took the lead early in the top of the first, putting up three runs. Every Hilltopper that made an appearance at the plate recorded a hit, and the team finished with 12 total hits.

“I am proud of the team’s effort today despite our slow start in the early morning game,” head coach Amy Tudor said in a press release after Friday’s games. “Anytime you can grab two wins on the road, it’s a good day.”

The two wins on Friday gave the Hilltoppers a 10-game winning streak which would be broken on Saturday by KSU.

WKU suffered its third and fourth losses of the season against KSU and WSU. Both games had final scores of 2-1.

The Hilltoppers were first to score in the seventh inning against KSU off of a home run by senior outfielder Kelsey McGuffin, which was also her first hit of the season. The Owls responded in the bottom of the seventh with two runs to give them the win.

Kennedy Sullivan, who came into the games as one of Conference USA’s Pitchers of the Week, picked up 11 strikeouts against KSU but suffered her first loss of the season.

The Hilltoppers were also the first to score in their game against WSU but again were unable to hold their lead. Sophomore first baseman Maddie Bowlds got the team’s only run in the top of the second and picked up two hits against WSU. Kelsey Aikey started in the circle and threw six strikeouts before being replaced by Shelby Nunn. The loss moved Aikey to 2-3 on the season. The Hilltoppers will be back in action on Wednesday in Nashville against Lipscomb, which has an overall record this season of 14-6- 1, good for first in the Atlantic Sun Conference.

Freshman pitcher Katie Turner is second in the ASUN with seven wins this season. She also has a batting average of .385, second best on the team.

Leading the ASUN Conference in bases stolen is senior outfielder Grayson Gladden. Gladden has 10 stolen bases and also 14 runs on the season.

The game is set to begin at 4 p.m. on Wednesday.