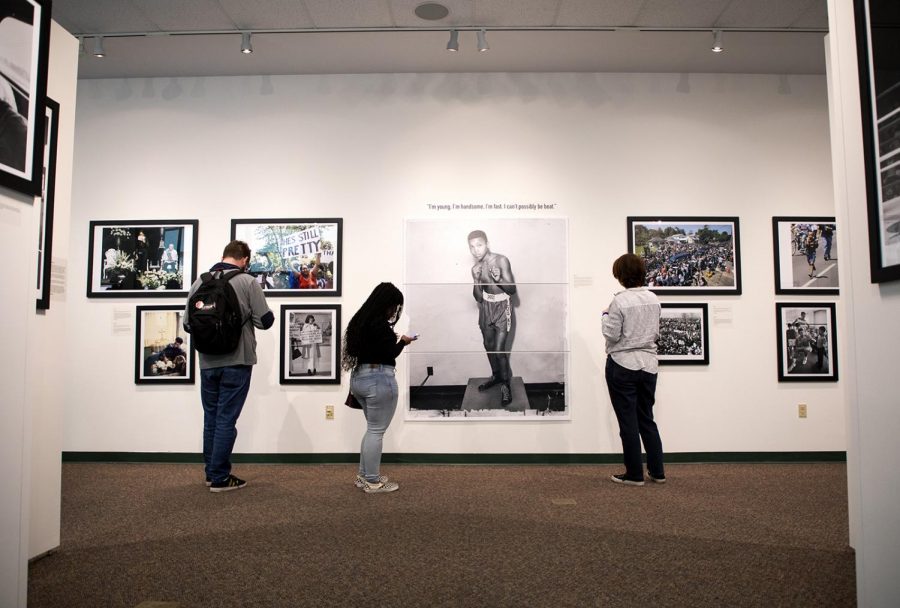 “Ali trusted these photographers with something very special, a commitment to document his entire life, both inside the ring, and, more importantly, outside the ring,” the event website stated.

The exhibition will be housed in the Jody Richards Hall Auditorium and Gallery from March 12 to May 3. The gallery and discussion was organized by photojournalism professor Tim Broekema.

A roundtable discussion was given to coincide with the gallery’s opening. Pat McDonogh, one of the speakers, works at the Courier Journal and went through the archives and found and compiled the photos into the book the event covers.

“It’s a great set of photos and I hope that people get to see it,” McDonogh said. “You really get a glimpse of what he was like.”

It all began when McDonogh began posting photos from the archives on social media. He said a publisher noticed the gallery and proposed creating a series of books. The Muhammad Ali exhibition specifically presents photos of Ali that McDonogh found significant.

The photos showed Ali not only as a boxer but also portrayed him outside the ring.

Monday’s round table for the gallery featured photojournalists Keith Williams, C. Thomas Hardin and Sam Upshaw Jr. from the Courier Journal who spoke about the book, the exhibit and Ali.

Louisville senior John Summerfield said Ali was one of his favorite historical figures of all time and cited him as an inspiration of his.

“[There’s] more to his story than can be said inside of a boxing ring,” Summerfield said.

Ali was named “Fighter of the Year” five time, by Ring Magazine and was inducted into the International Boxing Hall of Fame in 1990. Additionally, he was voted BBC’s “Sporting Personality of the Century,” and Sports Illustrated’s “Sportsman of the Century.”

However Ali’s legacy and honors expanded outside the ring. In 2005, Ali was awarded the Presidential Medal of Freedom. In 1990 he met with Iraqi Saddam Hussein to negotiate the release of American hostages, and traveled to Afghanistan in 2002 as a United Nations Messenger of Peace, according to History.com.

Downtown Louisville remains the home of the Muhammad Ali Center, a nonprofit museum and cultural center which tells the life of Ali while focusing on peace and social responsibility, according to the museum’s website.

Morgan Bass, a photojournalism student, grew up in Louisville and said he always heard stories about Ali’s boxing from her grandparents.

“The event is appealing because I want to know more about Muhammad Ali and also the field I’m planning to go into,” Bass said.

After the roundtable, attendees had an opportunity to have copies of the book, “Picture: Muhammad Ali,” signed.

An amount of the book sales will go toward a WKU Photojournalism scholarship fund.