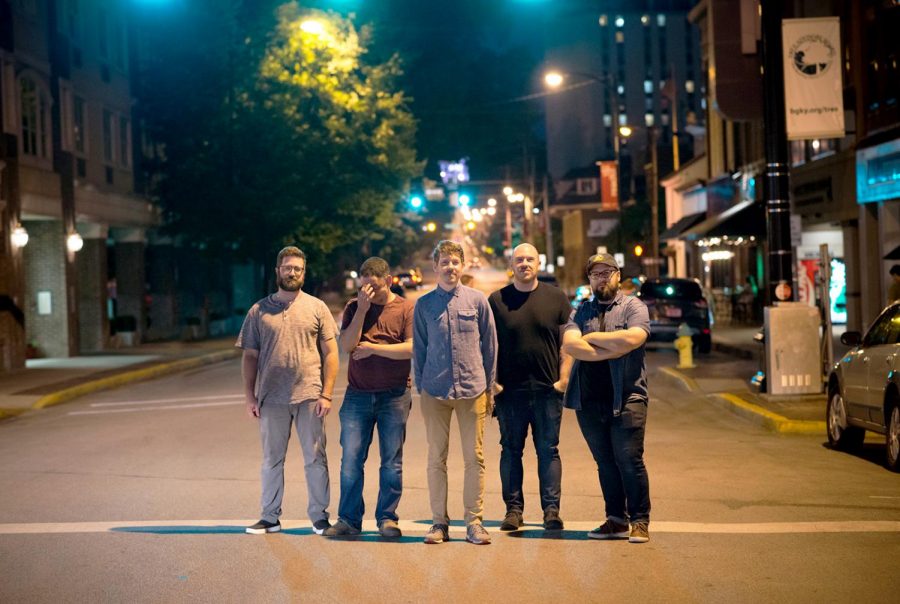 Among numerous big-name artists at the 2019 Grammy Awards was a small post-rock band from Bowling Green that doesn’t perform anymore.

Foxhole’s 2018 album, “Well Kept Thing,” earned the band its only Grammy nomination for Best Album Package. The album itself, however, was something the band’s members initially weren’t sure their record label would even distribute.

Despite this concern, they wanted to make it anyway.

Established in 2001, Foxhole was around before the Bowling Green music scene became what it is today. Justin Shepherd, one of the band’s guitarists, said in the days before bar and music venue Tidball’s became a haven for local artists, Foxhole played at houses and businesses.

Comprised of five friends who lived together while attending WKU, Foxhole recorded and packaged a four-song EP in the basement of a house on College Street, where they all lived, in 2002.

In the years following, Shepherd said Foxhole recorded “with various members at various places,” and performed and toured. Its first full-length album, “We the Wintering Tree,” was self-recorded in the basement of a Bowling Green church.

Shepherd described his fellow band members as a bunch of creative people. The recording and composition process, though at times difficult, was what Shepherd enjoyed most.

Unlike other bands, Shepherd said there was never just one member who wrote the songs, but instead, each of the members worked together to fashion each song.

Shepherd said that from there, each song would change as it was written, performed, recorded as a demo and recorded for an album. The refinement and opportunity to change and find new things was something Shepherd said he enjoyed.

“Just a constant flow of, sort of, discovery of the music itself and refining it and recording it — that’s the most rewarding thing to me in the creative process,” Shepherd said.

“Our intention was to get back into the studio as soon as possible and finish it, but just different things in life happened,” Shepherd said.

Shepherd said some of the members moved away from Bowling Green. A few months became a year, which became two years, which became members of Foxhole asking themselves, “Are we ever going to do this?”

Shepherd said another question the group had to consider was whether there would be a big enough market for its music, as years had gone by without performing.

The group’s hiatus occurred during a time when the music industry was facing changes. Shepherd said around the time Foxhole first recorded the album, it was posting updates on Myspace, and streaming music wasn’t as common as it is now.

If the members of Foxhole were to finish the album, it would be for themselves, Shepherd said.

Adam Moore, a Foxhole guitarist and the designer of the album art that earned the group its Grammy nomination, said without the friendship he formed with the members, the album wouldn’t have happened.

“It just became sort of like this monolithic thing in our heads — this epic album that was never going to come out,” Moore said.

Around Christmas of 2016, Foxhole regrouped in Bowling Green to reevaluate the album it had left about seven years prior. Shepherd said he and his bandmates rerecorded pieces but left others.

“Once we got back together, we really just finished it without even knowing if the label would put it out,” Shepherd said. “We really wanted to do it for ourselves more than anything.”

Burnt Toast Vinyl’s owner Scott Hatch said he’d heard rough versions of the album’s songs over the years and found it interesting to see them progress over time.

“I’m always a fan of albums being ready

when everything is right, so I don’t really get anxious with delays,” Hatch said in an email. “A lot can happen in making a record like this that is truly an outlet of artistic expression and a labor of love.”

Shepherd said the Grammy nomination was surprising because Foxhole is a small band that has “virtually no presence anymore,” but he was not surprised Moore’s art got noticed.

Moore said “Well Kept Thing” would probably be Foxhole’s last album, so the art he created for its cover was personal for the band members. He called it a “big mashup” of inside jokes in Foxhole’s history.

“Every little corner of the artwork is like some story that’s happened to us that some people may know about and some people may not,” Moore said. “It’s sort of a big narrative that you wouldn’t understand unless you were in the band.”

Now that “Well Kept Thing” has been released, Foxhole hasn’t made plans to perform or record anything else. It may some day, Shepherd said, but there’s no plan for it.

Though the members are spread throughout different cities, they remain in contact every day, Shepherd said.

“The most rewarding part of being in a band is probably just the friendships we ended up forming,” Shepherd said.

Features Editor Laurel Deppen can be reached at 270-745-6291 and [email protected] Follow on her on social media at @laureldeppenwku.