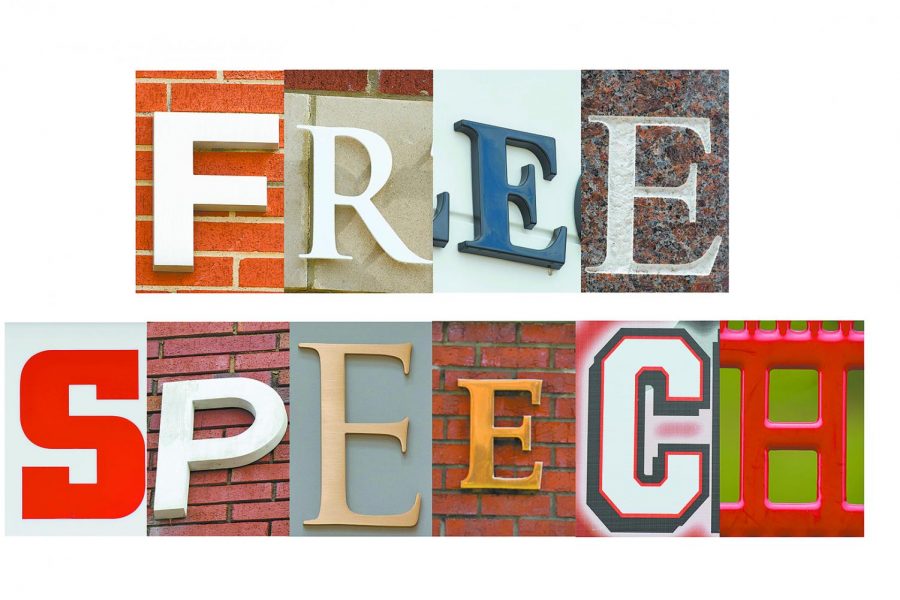 Students crossing through campus may occasionally witness free speech in action. One common example of this is the presence of religious speakers on campus standing with lists of people who are going to “hell forever.”

Typically, this garners a negative response from students, who tend to gather around and protest the speakers. Junior Olivia Evans said she understands the speakers’ right to freedom of speech but still takes issue with it.

“It is uncomfortable how strongly he forces his beliefs on us,” Evans said of a speaker who recently appeared on campus.

WKU’s free speech policy states that “any officially registered organization of students, faculty, administrators or staff may invite speakers of their choice to the campus to further educational goals” and “no restrictions will be placed upon the selection of speakers or their subject matter except those provided by law.”

The policy also states freedom of speech is a fundamental right protected under the First Amendment and “unpopular” speech may be challenged.

Whenever speakers come to campus and students protest them, Director of Media Relations Bob Skipper said both groups are in their right to do so because there are no “free speech” zones on campus. He added speakers may voice their opinions anywhere on campus.

The order is intended to ensure colleges are following the law when speakers decide to come to a campus regardless of their political affiliation. Trump said he created it in order to defend students’ rights and “American values that have been under siege,” according to the Washington Post.

Mac McKerral, journalism coordinator and professor, said he believes in the past Trump has shown little respect for the First Amendment but has now come out as a big proponent. He said the order can directly punish public institutions that don’t support free speech on campus.

“Everybody knows why,” McKerral said. “It’s because so many campuses have made attempts to shutter conservative viewpoints and conservative voices, and it’s a natural reaction. That’s what happens.”

Under the order, 12 agencies that make federal grants are directed to ensure public universities are “complying with the law and their own policies to promote free inquiry and debate,” according to the Washington Post. Trump also said federal funding to universities will depend on their assurance of free speech.

In reference to Trump’s executive order, Sydney Butler, a sophomore from Aurora, Illinois, said she agrees universities should follow First Amendment policies but doesn’t agree with his stance on funding.

“I don’t think it should be a basis of how well they follow it [the executive order], though, because that’s too subjective for something important like education funding,” Butler said.

Another point of contention in this arena has been the activity of a white nationalist organization on WKU’s campus. The group, formerly known as Identity Evropa (pronounced Europa), recently rebranded itself as The American Identity Movement. This rebranding took place in the context of a massive leak of Identity Evropa’s internal messages by a nonprofit media organization called Unicorn Riot, according to the Southern Poverty Law Center.

The organization has been active in postering around campus in an attempt to recruit students. The Student Government Association issued an official condemnation of the group in 2018.

Throughout time, McKerral said academic institutions have been a place people could come to and have all ideas accepted and expressed. However, he said there has become a trend of excluding opinions on college campuses.

“I just think that we’ve reached a point where we need to be very careful, particularly on college campuses,” McKerral said.