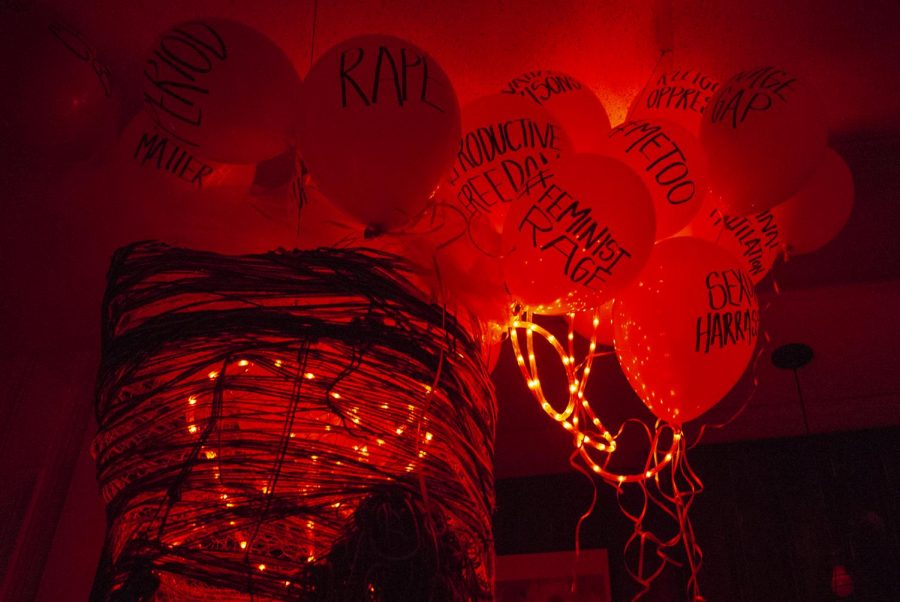 The Feminist Rage art exhibition was hosted at the Ingen Art Gallery on March 15. Many artists participated in the event giving locals the opportunity to buy and view the artists work.

Upon entering the gallery, there is a noticeable buzz among the patrons. Women and men alike take in the colorful art surrounding them, chattering excitedly about it. The pieces feature bold colors that resonate with the bold statements they make, all surrounding the theme of feminist rage.

Catrina Higgs was the creator of the Feminist Rage Art Exhibition, a part of the Bowling Green gallery hop, on Friday, March 15. Higgs, a painter, said her style is what she calls, “individualistic, feminist art.”

Higgs created the exhibit in an effort to confront the stigma and narratives associated with feminist rage.

“But it’s not just limited to females,” Higgs said. “It is feminism. It is feminist. My focal point was feminist rage, which then birthed this art exhibition.”

Higgs used the exhibition as a manifestation of how she is taking control of her own history and how she will take ownership of her time.

“It means ownership of my time, my history, it means I questioned everything… that I spoke my truth,” Higgs said. “Feminism is powerful and a necessary movement until it’s no longer needed. This exhibit showcases a piece of that.”

Higgs began work on the exhibit in October of 2018 when she contacted the owner of Ingen Art Gallery and Studio.

Leto’s pieces focus on her own view of feminist rage, highlighting intersectionality and her views of privilege.

“Some pieces I will be showing are from a collection entitled ‘CONTRADICTION’ and are meant to simultaneously expose my privilege as a white woman while highlighting the marginalized parts of my queer, fat identity,” Leto said.

To Leto, creating this exhibition was a difficult, though empowering responsibility.

“I quickly realized the responsibility I felt to the concept of feminist rage and felt I had to represent more than just the general experience of being a woman,” Leto said. “I got more personal in some of these pieces — at times literally naked — than I ever have in my paintings which brought up feelings of fear and shame. I put that into the work, because I believe in the transformative power of exposing one’s perceived weakness.”

Artist Chloe Lee, who focuses on psychedelic and pop, surrealist art, found that her work with the exhibit sharpened her artistic skills.

“This project has really pushed me to hone in more on portraying emotion through the women I illustrate,” Lee said.

Higgs said she believes the exhibit gives a fresh perspective on not just art, but also what individuals feel at their very core.

“WKU students have an opportunity to exist for one night within someone else’s artistic, radical, political, very expressive viewpoint of the world that may differ greatly from their own, maybe offensive even,” Higgs said. “It can show you something about yourself as a human when you’re uncomfortable and opposed, but know that it’s a good thing.”

Both Higgs and Leto said they hope the exhibit leaves attendees questioning, whether it’s their own values or the value of external influences.

The exhibit is set to relaunch on March 30.