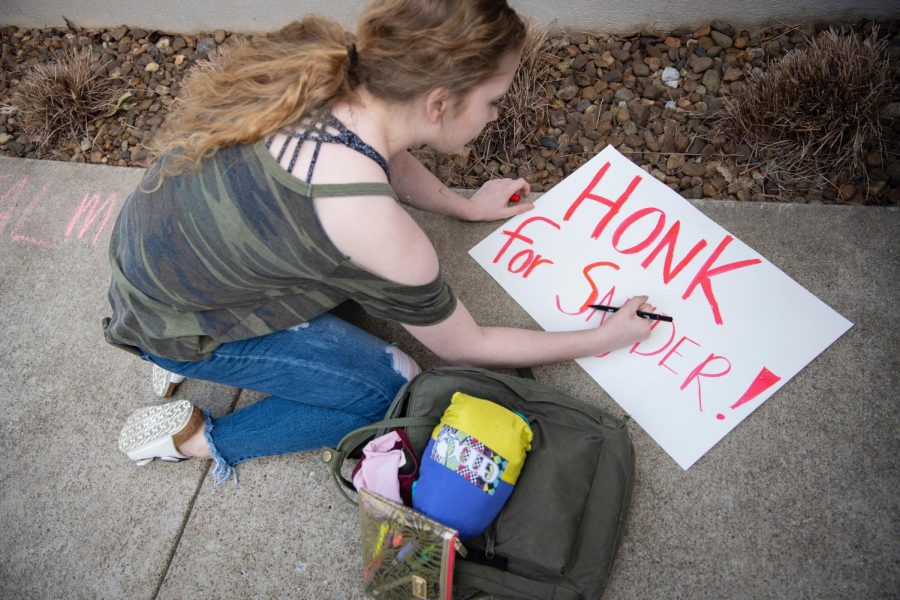 Freshman Kaetlyn Jeffries, of Frankfort, Ky.,  creates a sign to hold up during a protest outside of the Wetherby Administration Building. “It shows they’re not afraid to make some noise about it,” she said. Jeffries, a theater and dance student, joined other protesters who gathered on Thursday, March 28, 2019, after Larry Snyder’s sudden resignation as the dean of Potter College the previous day.

Student protests over the resignation of Dean Larry Snyder entered their third day on Friday as students gathered once again outside of Wetherby Administration Building.

The group’s numbers have grown since the protest’s first day on Wednesday, increasing from five to approximately 30 students over the course of two days.

Students, including Nathan Scott, gathered outside of Wetherby at 3 p.m Friday afternoon and waited as their numbers grew.

“We only know the was asked to leave,” Scott said. “We want to know why.”

Arielle Conrad stood among her peers with a sign and megaphone in hand, optimistic about the day’s protest.

Conrad said that the most important thing for her is the awareness that the protests have created. She said people have rolled down their windows and asked what was going on when they saw the group of students.

“We tell them and they’re appalled,” she said. “They’re just shocked that the university that they go to would do something like this and be this dishonest about it.”

“Faculty will quietly come by and give us a thumbs up or cheer us on, which is kind of enforcing what we’re doing,” Conrad said. “We have had a lot of support from people that’ve come outside the building or people who walk by.”

Cavan Hendron said that the support did not end outside of the Wetherby Administration Building.

According to Hendron, the protestors have had many people over the past days who stuck their heads through blinds and applauded the group.

When those inside came out, Hendron said that the students heard some individuals thanking them.

The protestors remained peaceful this afternoon, a point that Hendron emphasized.

“We are here again to spread kindness, love and respect,” Hendron said. “We don’t want to be misconstrued into a group that’s not doing that.”

Hendron said that he had noticed more students around campus willing to use their voices.

“I think for some students, they forget that we’re paying to be here, we also have a voice that we’re allowed to use,” Hendron said. “I want to make sure that this place remains an honest place within the administration and honest to its students.”