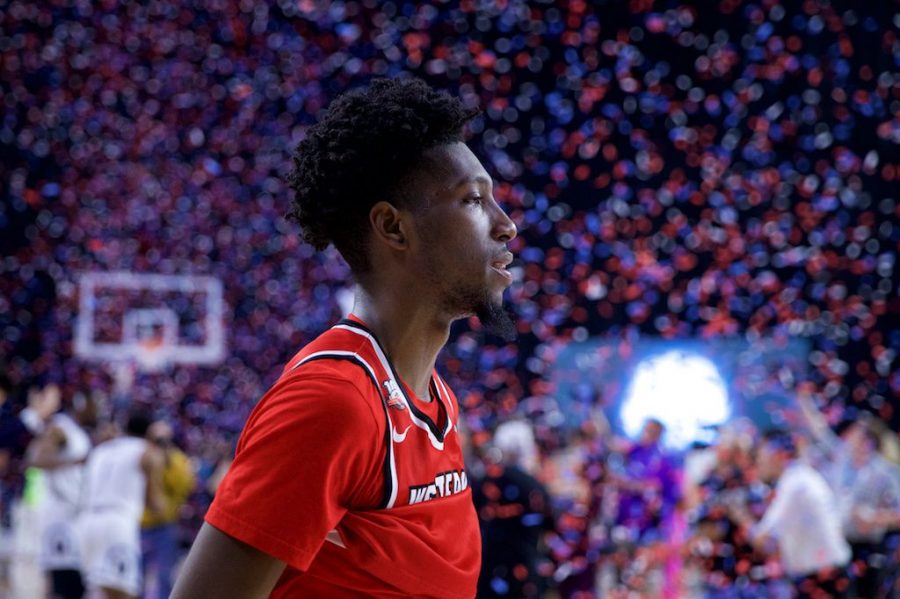 WKU sophomore guard Taveion Hollingsworth walks off the floor while Old Dominion celebrates at center court after winning C-USA Championship in the Ford Center at The Star March 16 in Frisco, Texas. WKU lost 56-62.

The WKU men’s basketball fell in the Conference USA tournament championship to the Old Dominion Monarchs, 62-56. This is the third time the Hilltoppers lost to the Monarchs this season.

WKU has fallen in the C-USA Championship game now in each of the last two seasons.

Freshman center Charles Bassey led the Hilltoppers in scoring with 12 points in addition to 10 rebounds. Sophomore guard Josh Anderson and Junior wing Jared Savage were the only other Hilltoppers in double-digits with 11 and 10 points respectively.

Head coach Rick Stansbury saw Green as the key to the game.

“Neither team was very good offensively,” Stansbury said after the loss. “I thought the difference in the game was just Green. He hit two huge threes.When you make threes late in the game, sometimes it’s tough to overcome.”

WKU won the rebounding margin (37-33), but that’s about all the squad had to show for. Old Dominion outshot WKU from the floor (41 percent to 34 percent) and from 3-point range (33 percent to 22 percent). WKU also made only 16 of 24 free throws while Old Dominion was a prefect nine for nine.

Savage said the Hilltoppers’ inability to make shots did the team in tonight.

“We just couldn’t make a shot,” Savage said after the defeat. “I mean that’s as simple as that. We couldn’t put it in the basket.”

Senior center Elbert Robinson III scored on a put back and the Monarchs scored the first four points of the game.

Caver added to the ODU hot start with a jumper of his own. WKU was scoreless the first three minutes of the game.

Senior point guard Lamonte Bearden got WKU on the scoreboard with a floater in the lane. WKU trailed 6-2 early on.

Robinson III responded with a hook shot to put ODU back up six. The Monarchs held a 8-2 advantage at the first media timeout.

Bassey asserted himself in the action with a layup to pull WKU within three. Green responded with a bucket of his own on the following possession.

Back to back buckets from Savage and Anderson drew WKU within a point. The Hilltoppers were three of their last three from the floor.

Sophomore guard Taveion Hollingsworth scored his first bucket of the game and gave WKU its first lead of the day at 11-10.

Freshman forward Kalu Ezikpe turned an offensive rebound into a bucket and put ODU back on top. WKU trailed 12-11 at the second media timeout.

Sophomore guard Jake Ohmer knocked in the first 3-pointer for either side and put WKU on top 14-12.

Robinson III went to work on the other side and tied the score with a paint bucket.

Sophomore guard Justice Kithcart made the first 3-pointer for the Monarchs and Old Dominion regained the lead.

Both team went back and forth with buckets from Bassey and Carver. WKU trailed by three.

Anderson ripped off a second slam dunk and brought WKU within one.

Hollingsworth gave WKU the lead with a pair of free throws, but Stith answered with a 3-pointer. Old Dominion led 24-22.

Freshman guard Jason Wade extended the Monarch lead to four with a layup, but Bearden responded with his first 3-pointer.

Kithcart finished off a tough layup and Old Dominion had its largest lead since the opening minutes of the game at five.

Hollingsworth knocked in a buzzer beater and the Hilltoppers went into halftime down 30-27.

Bearden and Hollingsworth both led WKU in scoring during the first half with six points each. Bassey scored four points and grabbed three rebounds.

Old Dominion had two players with six points each in Robinson and Caver. Kithcart provided solid bench minutes for the Monarchs with five points, including a made 3-pointer.

Both teams were near identical in rebounding (13-13) and shooting (45 percent for WKU, 48 percent for ODU). The Hilltoppers had slightly more turnovers, with eight to just six for the Monarchs.

Bassey started the second half scoring with a turn around jumper from the post. WKU was within a point.

Bassey knocked in a pair of free throws to draw within three of the Monarchs.

Anderson blocked a shot then converted a layup to get WKU within a point.

Bearden put the Hilltoppers up for the first time in the half with a pair of free throws. WKU led 35-34 at the second media timeout.

Marek Nelson scored his first points of the game to extend the WKU lead to three.

Green converted an and-one to tie the score at 37.

The next possession Green made the Hilltoppers pay with his first 3-pointer of the game, giving ODU the lead yet again.

Savage finally got a 3-pointer to go and the score was tied again.

Green kept up his hot shooting with another 3-pointer. He had scored the Monarchs last nine points.

Ezikpe converted his second layup and Old Dominion stretched its lead to five. Stansbury was forced to call his first timeout of the game.

Hollingsworth knocked in a pair of free throws to keep WKU in the game. Green would not slow down, though. He knocked in a bucket to widen the margin again.

The teams went back and forth as Bassey came up with another big bucket. The Monarchs led 47-44.

Savage knocked in another 3-pointer and the Hilltoppers were tied up again with Old Dominion.

Stith broke the tie with another bucket.

Caver came up big with a tough layup to extend the Monarch lead to four.

Green knocked in a huge 3-pointer to put the Monarchs up six with just 1:55 remaining.

Bearden knocked in a free throw to draw within five. Stansbury took his second timeout with a 1:34 left.

Caver put the finishing touches on the Old Dominion victory with another jumper late in the shot clock.

Bassey said these late shots from Old Dominion were back breakers for the Hilltoppers.

“Like coach says every time, we gotta watch the clock,” Bassey said. “With under five seconds left on the shot clock we have to communicate with each other to get the ball back. But we didn’t do a good job of that tonight.”

Anderson gave WKU a little life with a bucket and a foul to get WKU within four.

WKU will look for a bid in the National Invitational Tournament. The NIT selection show is on Monday a 7:30 p.m.