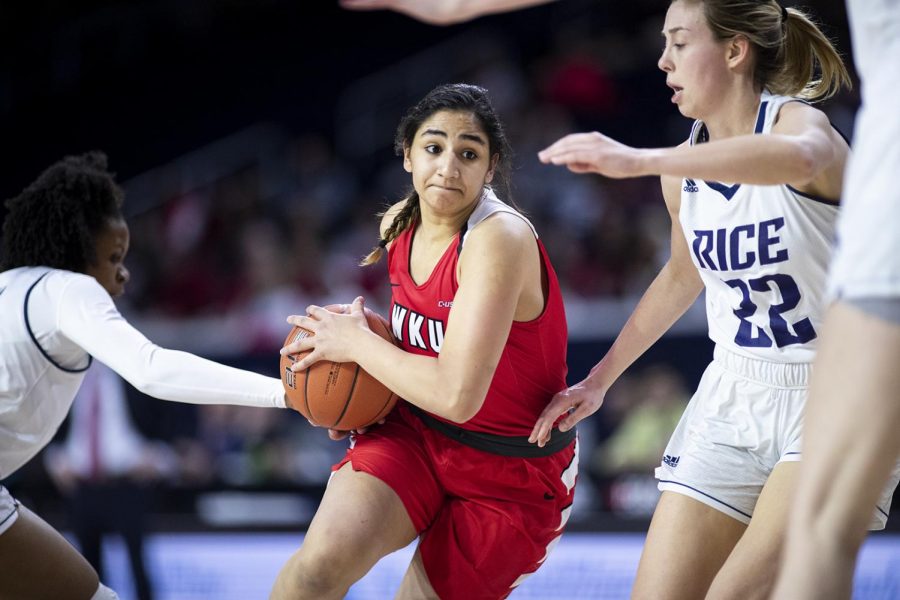 WKU freshman guard Meral Abdelgawad (30) drives into the paint against Nicole Iademarco (22) and a stingy Rice defense in the C-USA quarterfinal round at the Ford Center at The Star March 15 in Frisco, Texas. Abdelgawad only scored 5 points and had 3 rebounds in 21 minutes of play in the 64-57 loss. [HERALD/ Jospeh Barkoff]

For one basketball program on the Hill, the 2018-19 season is not over yet.

After falling to No. 21 Rice in the Conference USA tournament semifinals on Friday, WKU women’s basketball (18-14) learned its matchup for the Postseason Women’s National Invitation Tournament late Monday night.

The Lady Toppers will head to Oxford, Ohio, on Thursday to face Miami (Ohio).

WKU has played Miami just three times in program history. The Lady Toppers lead the all-time series 3-0, notching a neutral-site win in 1990, a home win in 1997 and an away victory in 2001, which is the last time the two schools met.

“We are excited to have the opportunity to continue our season in the WNIT. We improved as a team throughout the season and especially in the last few weeks,” WKU head coach Greg Collins said in a press release. “This is a chance for us to experience national postseason play with a young team, and that can only help us to continue to grow moving forward.”

Junior guard Lauren Dickerson leads Miami, as she averages a team-high 16.1 points per game, has totaled 67 steals, and has dished out 157 assists. The Indianapolis, Indiana, native started every game for the RedHawks, averaging 34.3 minutes per contest.

Dating back to 2004, WKU has hosted a first-round game in its last six WNIT appearances. That streak will end Thursday, as the Lady Toppers will play their first-round matchup in Millett Hall instead of Diddle Arena.

The Lady Toppers began the year as winners of the last two C-USA championships, which had granted the program back-to-back trips to the NCAA Tournament.

After failing to capture a three-peat, the Lady Toppers landed in the WNIT for the first time since 2015-16, when the postseason ended with a road loss in the quarterfinals.

Four C-USA squads were in the WNIT field last year, while five made it in this year.

The RedHawks and the Lady Toppers will tipoff sometime on Thursday.

With a win, WKU would advance to the second round. The Lady Toppers would face the winner of Morehead State (23-10) and Ohio State (14-14), which will take place sometime on Wednesday.

Game times will be announced on Tuesday, according to WNIT.