Taking a trip to faculty offices adorned with collections 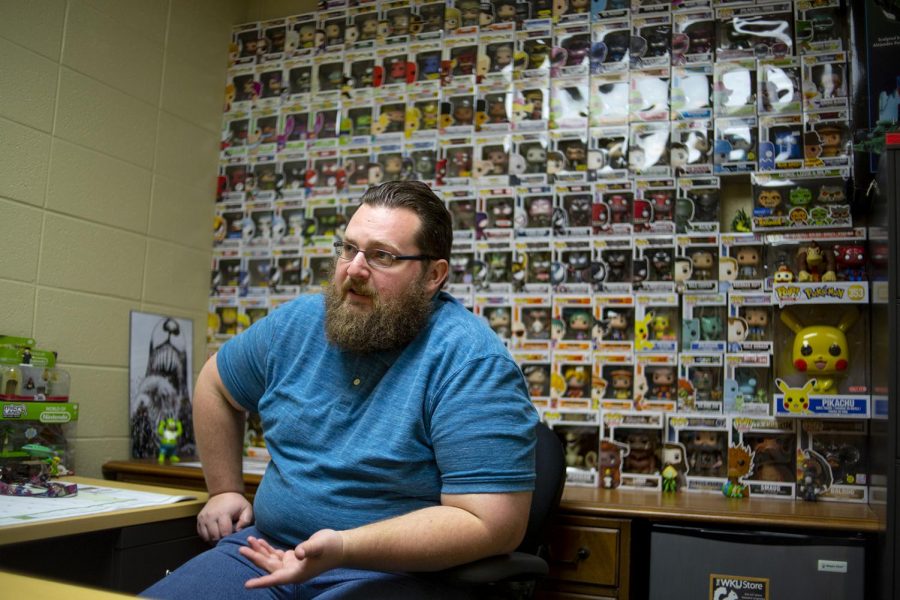 Assistant professor Joseph Hoffswell collects action figures in his office at the department of communication in the Fine Art Center. "My dad was a collector too, he was a comic book collector and that stuff hits home," Hoffswell said, "I've been collecting since I was a high schooler ... and when I was in my Ph.D. I started getting into the Funko Pops behind me, I had a couple but I started seriously collecting in 2013 or so."

Inside the Office of Student Activities on the second floor of Downing Student Union is an office unlike many others.

Though not noticeable when seen from the outside, a peek within reveals hundreds of PEZ candy dispensers placed in rows atop the shelves of a bookcase that covers almost an entire side of the office. Director of Student Activities Charley Pride said he began amassing such a collection around 15 years ago after a friend gifted some PEZ dispensers to his children.

“They ended up in my office instead of at home,” Pride said about how so many dispensers came to decorate and define his office.

With crates of dispensers in storage along with those displayed in his office, Pride’s collection contains dispensers of varying subject matter, including Disney movie characters, holiday themes and athletic teams such as the Chicago Cubs, his favorite MLB team. Since new dispensers become available on an almost monthly basis, he said increasing his collection is never too difficult.

Pride said he often checks PEZ newsletters to see when new dispensers will be in stores. He said he prefers buying dispensers from retailers as opposed to online sites.

“Part of it’s the thrill of the hunt,” Pride said about his collecting habits. “This is more of a hunt and find it.”

Pride said certain rare or vintage dispensers can be quite valuable and worth a couple hundred dollars. However, he said he’s never been interested in spending more than a few dollars for a dispenser, and his oldest dispenser is only around 15 or 20 years old.

Despite this, he said those who know about his collection never hesitate to help him search for a new dispenser, especially his children. He said it’s become common for his kids and other friends to text him photos of dispensers when traveling to ask if a certain dispenser would add to his collection.

“They keep an eye out for me,” Pride said.

Pride said his collection often surprises those who visit his office without knowing it exists. He said he enjoys seeing how unassuming visitors react when faced with a wall of PEZ dispensers, and he hopes it always serves as a conversation starter.

“I just like having a bunch of them,” Pride said. “They either think I’m crazy or it’s cool.”

Further up the Hill on the first floor of the Ivan Wilson Fine Arts Center sits a collection of similar magnitude. Instead of PEZ dispensers, however, this collection is comprised of various action figures, most notably of the Pop! Vinyl kind.

Pop! Vinyl figures, made by Funko, a company that specializes in the production of pop culture collectibles, are a type of action figure that has seen great popularity over the past decade. Extending into pop culture of all kinds, the figures are modeled after characters from movies, video games and just about everything else imaginable.

Since buying his first Pop! Vinyl figures while still in graduate school, assistant professor of popular culture Joseph Hoffswell said his collection of the figures now extends to nearly 200.

In order to preserve the worth of his collection, Hoffswell keeps each figure in its original box. He said he enjoys the aesthetic of the figures when kept in box, as well.

“Some people are out-of-box collectors … I’m not, obviously,” Hoffswell said while seated in front of a stack of still-in-box figures the width of his office and reaching only feet below its ceiling.

A lifelong fan of popular culture such as video games and television programs, Hoffswell said Pop! Vinyl figures are an affordable way to express his various fandoms, as most figures are available for less than $10 at standard retailers. Despite this, as the figures have increased in popularity, he said rarer figures can fetch prices in the hundreds and past $1,000.

“When I first started, it was pretty easy,” Hoffswell said about finding and buying especially valuable figures, which has become more difficult in recent years. “If I don’t go to the store that’s selling it the morning of, it’s very likely I’m not going to get it.”

Hoffswell said he avoids competing with other collectors for more valuable figures by sticking to buying them only at retail price. He said he’s opposed to spending over $100 on a single figure.

“I cannot in good conscience spend that on one single toy item,” Hoffswell said. “Staring at a single object — I don’t think I could ever do it.”

Hoffswell added he typically prefers buying the figures in store as opposed to online, which often includes an element of risk due to potential shipping issues such as mishandling and bootlegging. Hoffswell said he manages this by keeping up with Funko newsletters and online fan communities that reveal when certain figures will become available in store.

“I find it more fun to know when it’s coming out and to come to the store and get it,” Hoffswell said.

Previously a collector of Game Boy Advance games and comic books, Hoffswell said he believes collecting is an extension of maintaining fandoms of all types.

“You feel an ownership once you begin becoming a fan of something,” Hoffswell said. “When you make it tangible by buying artifacts from that fandom, it immerses you even more.”

As a professor within the popular culture program, Hoffswell said he plans to eventually research collecting communities to try and uncover what motivations lie behind an average collector. Personally, he said his collecting habits and interlocking fandoms partly inspired his choice of profession.

“My fandoms drove me towards my career, to be quite honest,” Hoffswell said. “This has guided me on my path to success.”

Though his collection of Pop! Vinyl figures has become numerous enough to almost fill his office quite literally to its top, Hoffswell said he believes to conflate collecting with hoarding is misguided, as collecting often includes trading or selling items when necessary or desired. Instead, he said he believes his collection is a representation of his interests and also a conversation piece for students and colleagues who may visit his office.

“I enjoy looking at them. I enjoy haing these items that represent my various fandoms,” Hoffswell said. “I feel that upon seeing this wall and all the nerdy stuff I have in here, that puts people a little bit more at ease.”

Hoffswell said he hopes to continue collecting Pop! Vinyl figures and discovering new ways to make them fit into an office gradually losing space. He said he’s currently on the lookout for figures from series like Naruto and Dragon Ball Z as well as a Spider-Hulk figure from a comic in which Spider-Man, Hoffswell’s favorite superhero, turned part Hulk.

Though less conventional, a collection to rival that of both Hoffswell and Pride remains. Located on the third floor of Jody Richards Hall, a collection 30 years in the making sees perhaps some of its final days.

Since starting his career at WKU in 1986, Stephen White, a transitional retiree teaching within the journalism and broadcasting department, has acquired a seemingly infinite number of items both practical and aimless to house in the various offices he’s had.

Back when the journalism and broadcasting department was situated inside FAC, White’s office was on the building’s first floor. He said he quickly learned he’d need to go upwards if he wanted to increase the office’s spatial capacity.

“I said, ‘I’ll just go vertical,’” White said about his decision to place a metal pylon fitted with shelves for space accommodation inside his first office. “That started it.”

The pylon followed White to the two offices he’s had in JRH, including his current office. Aside from the pylon, White’s office includes two radio-controlled sumo wrestler toys, a plush Pickle Rick from the animated series “Rick and Morty,” a wooden steampunk clock, a small television and DVD player with classic film “Citizen Kane” always on loop, numerous puppets left over from animation classes and video cameras from a time in which everything was recorded on 3/4 inch cassette tape.

Though he said his office commonly baffles the people who come across it, he said many professors at WKU used to be in a similar position.

“What I find interesting is it did not used to be out of the ordinary,” White said. “Everybody’s office was a mess.”

Aside from appearing a tad messy, White said he believes his office is remarkable in its functionality. Also a car collector, White said his garage operates very similarly to his office in that it contains any and everything he might need for a typical work day.

As his office holds video cameras of diverse format capacities from varying time periods, he said he feels like a curator of sorts.

“You could say it’s a little mini museum,” White said regarding his office’s status as a space for now-defunct and misfit equipment. “It’s been built over 32 years at Western.”

Though he said his office’s unique composition lends itself to being particularly convenient when students are in need of obscure videography equipment or props, he said he believes his collecting habits are sometimes purposeless.

“It’s also a burden,” White said. “I’ve had to kind of curate that stuff ultimately for probably no purpose.”

White added he believes it’s strange his office receives as much attention as it does, which has caused him to wonder if people have generally become more interested in normalcy than expression.

“It does kind of make me feel odd that it’s unique,” White said. “To me, it really shouldn’t be.”

As his process as a transitional retiree is near its end and he’s set to leave WKU for good at the end of the semester, White said he plans to toss some of the collection he’s gathered over the past three decades soon. He said he intended to start after dismissing one of his animation classes on a Wednesday evening.

With the class gone and a score of toy action figures for stop motion filming used during the class left behind, White said in an email a student stayed late and approached him. When told the figures would be disposed of, the student told White a kid who lived beside him would be grateful to keep them.

After years in his care, White parted with the figures.

“So even though the office is a bit more empty, there’s a happier child out there,” White said in the email. “The legacy lives on.”

Features reporter Griffin Fletcher can be reached at 270-745-6291 and griffin. [email protected]