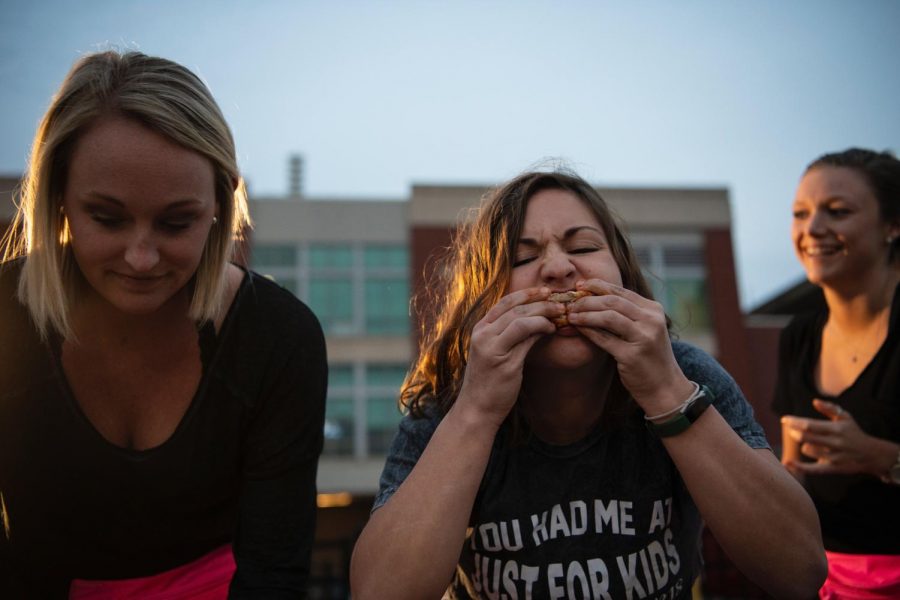 You may not have seen what was happening on South Lawn on Thursday evening, but you definitely heard it.

On a stage tucked behind Downing Student Union, teams of students competed to see who could down the most wings—for a cause.

This cause is particularly important to a number of sorority members, including Sabrina Adams.

Adams’ mother was born completely deaf. Despite this, Adams said her mother has lived a full and productive life.

“Sadly, nothing will allow her to hear but for many other people in this world all they need is a hearing aid,” Adams said in an email. “By supporting the Starkey Hearing Foundation we are able to help give hearing aids to people who wouldn’t have access otherwise.”

Adams hopes her work and the work Delta Zeta does will have the power to do for others what she knows isn’t possible for her mother.

“This is very rewarding to me because I feel like this is one of the closest thing I could do to giving her the ability to hear,” Adams said. “Everything we do for Starkey or in speech and hearing I feel I am also doing for her.”

Heidi Holgate, Delta Zeta’s vice president of philanthropy, said she believes this event, and the other philanthropy events on campus, serve good causes and remind students to care for each other more than we would otherwise think to.

“Starkey provides hearing aids world-wide, which is pretty special,” Holgate said. “Imagine hearing your mother’s laugh for the first time, or the sound of nature on a hike, or even music. That’s the impact this cause has, and that means a lot.”

Addie Ringenberg, vice president of philanthropy assistant, said the event is a major mood booster, especially around this busy time of year.

Holgate said participants can enjoy cheering on some of who she calls Bowling Green’s bravest souls.

“This is a fun and competitive environment to come enjoy community and be a part of something much bigger ourselves,” Holgate said.

The competition consists of teams of three to five participants who competed in multiple rounds of eating as many wings as they can, with each round increasing the level of hotness of the wings.

“It’s a lot of pressure having a light shining in your face,” contestant Susana Cato said. “You don’t chew you just swallow. It was a little nerve wracking going against guys, but overall, I got free wings and it was for a good cause.”

This event drew a sizable crowd to South Lawn to watch as men and women fought to see who would be crowned the Wing Wars champion. Attendees cheered on their favorite teams while enjoying refreshments like wings, popcorn and cotton candy.

Wing Wars hosted 11 teams with a total of 55 participants. A total of around 1,100 wings were consumed through the event, with around 500 being eaten through the competition and 600 being sold at concessions.