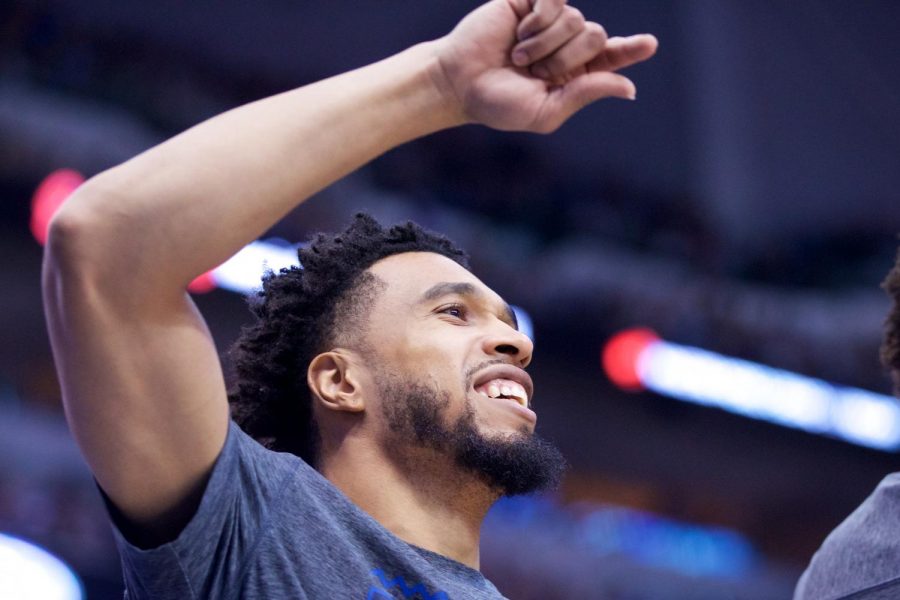 Dallas Mavericks' new acquisition Courtney Lee celebrates on the bench while watching his teammates battle the San Antonio Spurs at the American Airline Center on March 12 in Dallas.

WKU men’s basketball legend Courtney Lee did not log a minute for the Dallas Mavericks in the squad’s 112-105 home loss against the San Antonio Spurs on Tuesday evening, but the 6-foot-5-inch shooting guard is still doing his alma mater proud in his 11th NBA season.

Lee, 33, has represented the Hilltoppers in the NBA since being selected 22nd overall by the Orlando Magic in 2008. Lee has posted the longest NBA career by any WKU alum ever, topping Clem Haskins’ nine-year stay at the next level from the late 1960s until the mid-1970s.

A number 32 jersey hangs in the rafters of Diddle Arena to honor Lee, who scored 2,238 points on the Hill and tied legendary center Jim McDaniels for the all-time scoring record.

Lee remembers his time as a Hilltopper fondly because it helped him become who he is today.

“That’s where I really learned how to become a man,” Lee said. “I learned my work ethic, everything on — and off — the court. A lot of good memories there, a lot of friends that I still keep in contact with.”

A prototypical 3-and-D player for most of his pro career, Lee averaged 10.8 and 12.0 points per game for the New York Knicks in his first two seasons after signing a four-year free agent contract worth about $48 million in July 2016, according to Spotrac.

But Lee’s place in New York slipped away after he missed the first 24 games this season with a neck injury. Lee was shopped around and ultimately sent to Dallas on Jan. 31 as part of a blockbuster trade that saw the rebuilding Knicks deal away their young star, Kristaps Porzingis.

Mavericks point guard Devin Harris also played in New Jersey during the 2009-10 season, back when Lee was a second-year player coming off an NBA Finals berth as a rookie.

Harris, a 14-year veteran whose locker sits directly next to Lee’s in Dallas, said he has seen Lee grow into a guy who “does things the right way” mostly from afar, but now up close once again.

“He’s a solid player,” Harris said. “You know, brings a lot of things into the locker room, lot of personality, guy that works hard, cares about the product he’s putting on the floor and you know, overall good dude.”

Lee said the transition to playing in a Mavericks uniform has been easy.

“They’ve done more than enough with helping me get comfortable with relocating as far as housing,” Lee said. “Teammates have been unbelievable. Trying to pick up everything on-the-fly hasn’t been too easy, but I mean, they’ve been helping me out as much as possible.”

What hasn’t been so easy for Lee is actually seeing the court in Dallas, as the experienced veteran is averaging only 10.7 minutes per night sitting behind younger talent on the roster.

“You just got to stay ready, as a player, for anything,” Lee said. “Some nights, [coach] may need you — some other night, some other guys may get their opportunities.”

But Lee has no complaints with waiting his turn, even as a proven commodity.

“It can be [hard], but that’s part of the job man,” Lee said. “You got to be professional. When your number’s called, you just got to get up and try to perform to the best of your capabilities.”

Mavericks point guard Jalen Brunson, a rookie from Villanova, said playing with a seasoned veteran like Lee raises awareness with his knowledge and helps team chemistry.

Lee’s Dallas teammates are not the only players receiving positive vibes and encouragement, as the Indianapolis native said he is also rooting hard for WKU in the Conference USA Tournament, which is being held this week at The Star in nearby Frisco, Texas.

Sophomore guard Taveion Hollingsworth and freshman center Charles Bassey are two current Hilltoppers who have caught Lee’s eye in the games he has been able to catch this season.

Lee previously held the record for most points scored by a WKU freshman with 461 in 31 games. But Hollingsworth passed that mark last season with 506 points across 38 contests, while Bassey has already clocked 464 points this year and will tally even more this postseason.

Lee said he is proud of Bassey (“very talented freshman that I’ll probably be seeing here next year”) and Hollingsworth (“I seen he made third-team all-conference this year”) for their contributions so far this season, but he is looking for more than just regular season success.

“I would want more than anything to watch them make it to the NCAA Tournament, play against one of the schools that one of my teammates went to here, and we beat them, so I can brag about that nonstop and get paid for all that,” Lee said. “So, I’m rooting for my guys.”

Meanwhile, WKU is still rooting for Lee too, as evidenced by the various figures in town to eat dinner with him postgame, including legendary former WKU women’s basketball head coach Paul Sanderford and two WKU associate athletic directors, Mike Gaddie and Jim Clark.

Even while his professional career is somewhat in flux, Lee still has enduring support from Hilltopper fans and all of his other supporters in Bowling Green, who voted him to WKU men’s basketball’s All-Century Team as a captain on Sept. 10, 2018.

“I can name a million people there that’s contributed to helping me get to where I’m at man, it’s a lot of people that I consider family to this day,” Lee said. “I can’t speak enough about Western Kentucky.”