Students raise money for cancer research by dancing the night away 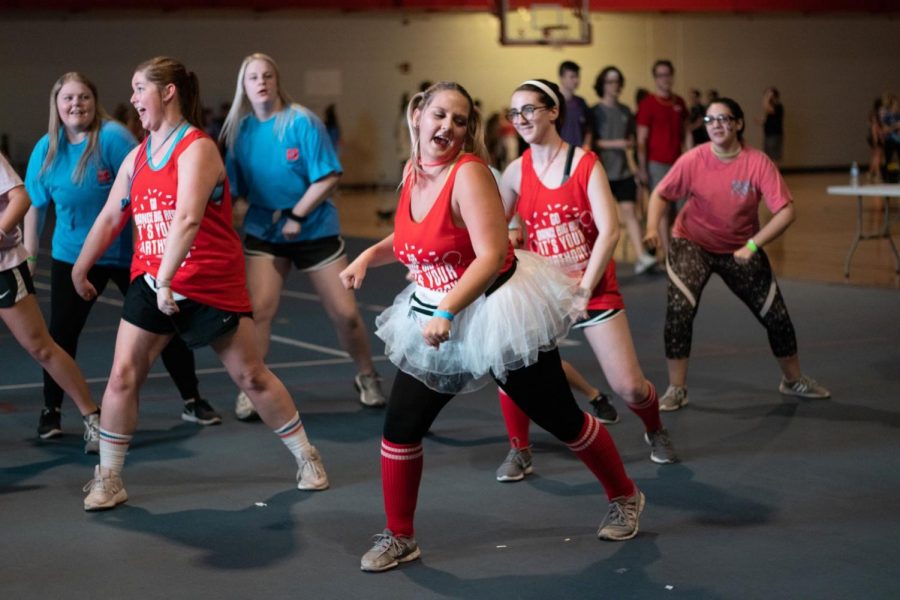 Riley Ball leads a group of friends at the annual Dance Big Red event, in Preston Center on March 30, 2019.

After 12 hours of nonstop dancing, students participating in Dance Big Red in the Preston Center raised more than $71,000 for Norton Children’s Hospital.

“When I learned that Dance Big Red was the largest non-profit organization on campus, I knew I wanted to get involved,” Paige Priest, senior and Dance Big Red co-chair said.

Priest said she was drawn to Dance Big Red her first year on campus, and felt especially connected to the organization because she had a younger cousin who had undergone heart surgery at Norton Children’s Hospital.

“I love when people come together, and I just want everyone to realize how amazing Norton Children’s Hospital is,” she said.

“I’m an elementary ed[ucation] major, so I obviously love children,” Humpert said. “That’s what really hooked me into coming that first night.”

Humpert said that she fell in love with the event and the cause that first night she attended and has been participating ever since.

Humpert also said that this event was not exclusively for students in Greek life.

“It’s not just a Greek thing, it’s an everybody thing,” Humpert said.

Dana Matukas served as a liaison for Norton Children’s Hospital and as an advisor to the students on the committee.

Matukas said that Dance Big Red raised around $73,000 and had approximately 800 students during their 2018 event.

The Dance Big Red this year, Matukas said, would be a bit different than in years past. The event’s first hour was open to the community, a change that Matukas called “community hour.”

“We had family members or friends who want to see it in action and to cheer on their dancers,” Matukas said.

Matukas said that students were expected to stand for the full twelve hours, staying on their feet all night with no sitting allowed.

Jalynn Fortwendel and Savannah McCutchan went to the same high school and participated in this year’s Dance Big Red together.

Fortwendel instructed a dance later in the night and sported a red tutu and pink glitter stars for her sunglasses.

Fortwendel and McCutchan said that they began participating in dance marathons during their freshman year of high school, and instantly knew that they would sign up when they caught wind of WKU’s Dance Big Red.

McCutchan said that she was excited to see who would last the full 12 hours on the floor and expressed her hopes for an even bigger turn out in 2020.

“The more people we have, the more money we raise,” McCutchan said. “It’s an amazing cause and it helps so many people.”

Dance Big Red ended with the performance of the 12-minute dance that students learned throughout the night and with the announcement of spirit winners and the grand total of funds raised.

The total amount raised by students was announced by the flipping of boards with numbers on one side.

The crowd of exhausted dancers erupted in cheers when the number was revealed: a sum of $71,780.17.

The top participant was announced to be Hannah Hoerlein, who raised $1,375 for Dance Big Red.

Matukas closed the event with a short congratulatory speech.

“This is one of the best, most energetic groups,” Matukas said to the crowd.

After 12 hours in the dimly lit gym of the Preston Center, Dance Big Red students stepped out into the light of day.