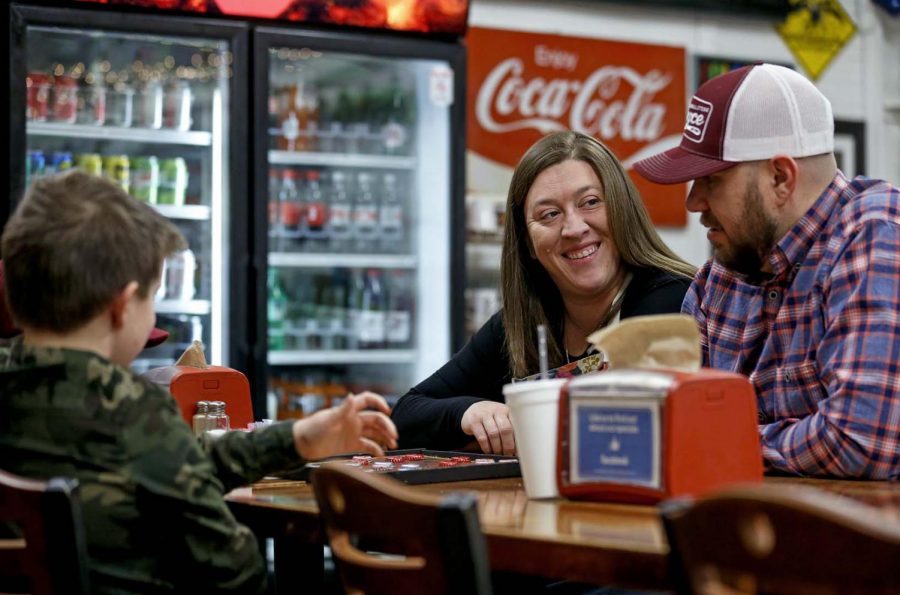 Brad and Brie Golliher play checkers with their sons on Sunday, Feb. 17 at their store. "I went to Western for photojournalism and Brad has a degree in graphic design," Brie said.

Two out-of-service gas pumps sit in front of a gravel parking lot that has long-accompanied one of Kentucky’s oldest operating general stores. A red sign on the store’s front door reads, “Our space is cramped. Please form a line down the ramp.”

Upon entering, a cowbell jingles back and forth that’s been there so long it’s dented the top of the door. To the right is a glass-front cooler filled with homemade pies, and the store’s white walls are lined with shelves stacked with antiques.

This scene belongs to none other than Boyce General Store, a community staple in Alvaton since it opened in 1869, Lately the store has been gearing up to celebrate its 150th anniversary. The store’s co-owner Brie Golliher said she believes Boyce owes its longevity to its familiar appeal.

Though the store has gone through different owners over the years, occasionally closing for one or two years at a time, Brad and Brie Golliher bought it in 2012 and have stuck around since. Both Gollihers graduated from WKU, Brad in 2006 with an advertising degree and Brie in 2007 with a photojournalism degree.

Despite their degrees not relating to the restaurant business, the two have helped Boyce grow exponentially during their ownership. Brie and the store have been featured in various online publications due to their growing popularity, as well.

“It’s more than we could ever dream up,” Brie said.

One of the tag lines the Gollihers have formed around Boyce is “building traditions,” Brie said. She then proceeded to look around the dining area and list off some of the regulars’ drink and food orders. A waitress came gliding through minutes later with that exact food, affirming Brie’s predictions.

As Brie grew up just down the road from the store and has many childhood memories of it, she said family business and making the store family-friendly have been crucial. She said she believes Boyce’s customer demographic is evenly split between regulars who live nearby and tourist.

“It’s been a big part of my whole family,” Brie said. “My grandmother grew up coming in and getting a little brown bag of candy and then walking home.”

In its down season during the winter months, the store still sees an average of 200 guests come through its storefront on both Fridays and Saturdays, Brie said. In the busy summer months, she said it averages 500 guests daily. This might not seem like much to some, but its dining area seats at most 35 people at any given time.

Kenny and Sharlene Grant, who are both WKU alumni, live down the road from the general store and said they go there at least once a week. Kenny tends to go more frequently, often stopping in for breakfast three to four days a week, which led to Brie knowing his breakfast order and predicting Kenny and his wife would order the fish fry meals, which are only served on “fry days” for lunch.

“They work hard at it,” Sharlene said about the Gollihers’ success. Perhaps another reason for their success is they use locally-sourced meats and vegetables to make up their menu. Need More Acres Farm farmer Michelle Howell helps supply produce to Boyce and said in an email she appreciates supporting another local business.

“My husband Nathan and I believe that it’s important for small businesses to be really thoughtful about collaborating with other small scale and local businesses as often as possible,” Howell said. “What I believe both of our businesses are doing is trying to get back a little of the goodness that’s been lost through the years.”

Brie said when they bought the store, the previous owners had been using Kirby and Poe Meat Processors’ sausage, but that was about the extent of their locally-sourced food. Brad and Brie tried to make everything as much farm-to-table as they could, she said. They still use Kirby and Poe pork products and partner with various farms and gardens for fresh, local food items.

Melinda Downing, co-owner of Downing Cattle Company, said she has been working closely with Boyce for a few years now. Her company, located in Fountain Run, Kentucky, provides beef to the store.

Brie said she thinks the general store has lasted so long because the community has rallied around it to keep it in business. Brie said Boyce plans to celebrate its century-and-a-half birthday “with a big cake,” she said.

The celebration is planned for the last night of the store’s annual Pickin’ on the Patio summer concert series on Aug. 17. As always, Boyce plans to have a lot of food, a lot of music and a lot of fun, Brie said.

She said the customers and community have become family, so it’s no surprise the store has been around for so long. The celebration will be a long time coming for a store that has seen and supported a community through the years, filling stomachs and feeding souls.