Lady Toppers get back on track with overtime win at Marshall 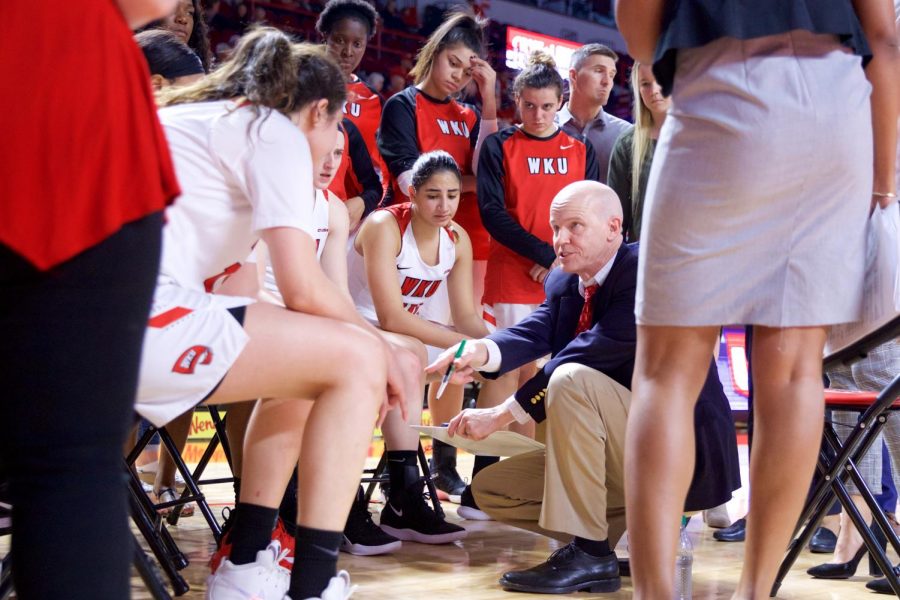 Lightning struck the same place twice on Saturday afternoon, as the WKU women’s basketball team notched the season sweep against Marshall. The Lady Toppers snapped their four-game losing skid and moved up the Conference USA leaderboard.

The Lady Toppers were led by redshirt junior forward Dee Givens, who also became the 40th member of WKU’s 1,000-point club. Givens returned to form by posting her second career double-double with 23 points and 13 rebounds in her breakout showing.

“You know, it feels amazing,” Givens said on the postgame radio show. “Coming in, I didn’t think I would possibly reach that accomplishment. But I did.”

Marshall senior Shayna Gore led all scorers with 26 points on six made 3-pointers.

A layup from sophomore forward Raneem Elgedawy gave WKU a 2-0 lead less than 30 seconds into the contest, but Marshall quickly responded with a 3-pointer. The Lady Toppers mounted a 9-3 lead thanks to a 7-0 run. Marshall was not rattled, as the Thundering Herd took a 10-9 lead over WKU after rattling off a 7-0 of their own.

Givens put WKU back in front with two free throws at the 4:24 mark, 11-10. Each time the Lady Toppers took the lead, Marshall found a way to tie it up. Redshirt sophomore forward Arame Niang nailed a late 3-pointer, but Marshall led by one after 10 minutes.

WKU’s 1,000-point club gained another member early in the second period, as Givens knocked down a 3-pointer to give the Lady Toppers a 19-17 lead. The Thundering Herd nailed a 3-pointer of their own and refused to let WKU build a sizable advantage.

Niang was crucial down the stretch in the second quarter, notching three layups in the frame. Following Niang’s final layup, the Lady Toppers failed to notch any points in the last 3:06. Marshall did not score in the final 2:16, but still held onto a one-point lead.

Marshall led WKU by a razor-thin margin at halftime, 32-31.

Though the Thundering Herd netted an early 3-pointer, the Lady Toppers still managed to open the second half on a 9-3 run which resulted in a 40-35 lead. Elgedawy extended WKU’s advantage to seven at the 6:05 mark, but Marshall refused to go away.

Following the third quarter media timeout at 4:31, Marshall dominated the rest of the third quarter. The Thundering Herd mounted an 8-0 run over 5:13 of clock time and regained the lead thanks to the Lady Toppers failing to score during the final 6:05.

Redshirt junior guard Alexis Brewer kicked off the fourth quarter on a personal 5-0 run, netting a 3-pointer and a layup to give WKU a 49-45 lead. Marshall and the Lady Toppers continued to fight, but WKU led by five with 4:15 left to play.

The Thundering Herd tied the game at 57-57 with 2:04 remaining, eventually taking a 60-59 lead on a 3-pointer with only 1:18 left on the clock. Two Givens free throws put WKU back in front 61-60 with under a minute to go, but Marshall sent the game to extras by nailing a free throw of its own.

Givens’ half-court shot in the closing seconds of regulation nearly fell in at the buzzer, but overtime was needed to decide the outcome. Marshall took a three-point lead with 3:38 left in extras, but WKU would not be denied. The Lady Toppers negated their shakiness at the foul line with lockdown defense, escaping with a three-point road win.

Following the win, the Lady Toppers will be off for a week until heading to the Super Pit for a rematch with North Texas (14-11, 7-6 C-USA). WKU lost its previous meeting with the Mean Green 76-67 on Feb. 9 in Diddle Arena. The Lady Toppers will be looking for revenge as they conclude a four-game road swing Saturday at 5 p.m. in Denton, Texas.