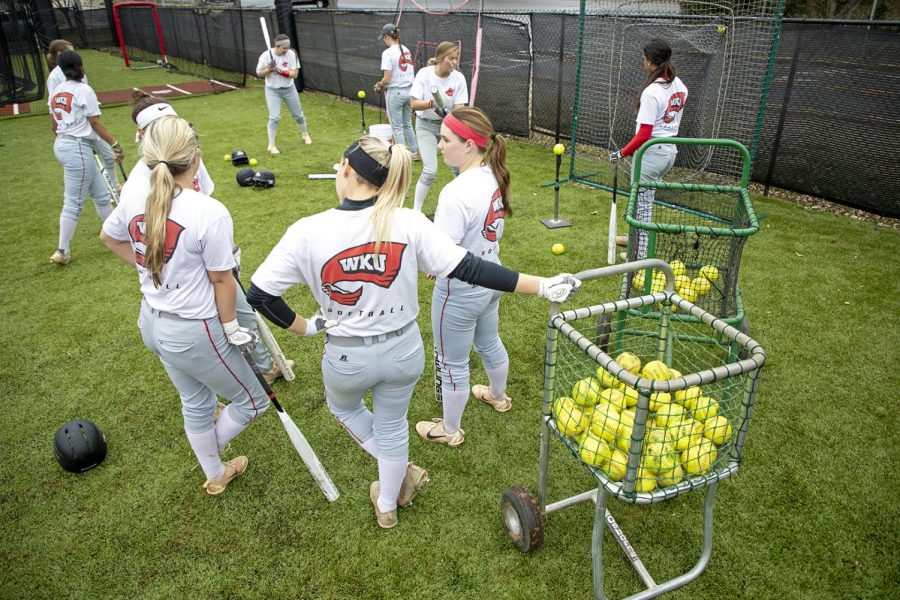 Wku’s softball team starts off their practice after their warm ups with batting at the WKU Softball Complex on Feb.4, 2019.

The WKU softball team is looking forward to a more competitive season this year, head coach Amy Tudor told the media last Monday. The team has big goals for 2019, like reaching and winning the conference tournament, but Tudor said it needs to take it one step at a time.

“We need to focus on all the little things in between,” Tudor said.

She said one of the main goals now is to focus on the process of getting better at softball, becoming better teammates and being great leaders.

The Lady Toppers have been picked to finish seventh in Conference USA this season, the same that was predicted of them last year. They ended up finishing eighth in the conference with a C-USA record of 10-13 and an overall record of 28-26.

The Lady Toppers are returning all players except for shortstop Brittany Vaughn, who graduated in 2018. Vaughn was a key player in 2018, earning a team-best of eight home runs and leading the team with 39 RBIs.

Replacing Vaughn at shortstop will be junior Morgan McElroy, who has mainly played second base during her career at WKU. Tudor said she believes shortstop is McElroy’s natural position.

The Lady Toppers will bring in six newcomers this season, five freshmen and a senior transfer from South Carolina, Shannon Plese. Plese made 34

appearances for the Gamecocks as a junior in 2017, starting in five games.

“Shannon Plese will bring tons of confidence to our team,” Tudor said.

The roster contains four seniors, given Vaughn served as the lone senior on the 2018 team. Tudor said she felt this has only changed the team dynamic slightly, as leadership roles are still evenly dispersed among her players.

“I think everyone has different leadership roles coming from a freshman to a senior,” Tudor said. “You know, for me it doesn’t matter if you’re a freshman or a senior, everyone’s voices need to be heard, and all the players need to be on the same level. That’s something we’ve tried to incorporate. We’re all the same.”

The Lady Toppers traveled to Gulf Shores, Alabama, last weekend to compete in the Sand Dollar Classic. They finished the weekend 4-1, suffering their only loss to Auburn (0-8) but picking up wins against Missouri State (8-0), Florida A&M (4-3), Tennessee State (5-0) and South Alabama (7-3).

The team’s last win of the weekend broke a five-game losing streak to South Alabama, giving it an all-time record of 12-15 against the Jaguars.

“Kennedy Sullivan was solid in the circle for us,” Tudor said in a press release after the Missouri State game. “She had a great command of her pitches.”

Sullivan, a freshman, gained her first career win against MSU, dealing 11 strikeouts in five innings. She is the first freshman pitcher to earn double-digit strikeouts in their WKU debut since at least 2008.

Sullivan had 18 other strikeouts this weekend with a total of 29 in her three appearances in the circle.

Also playing key roles in the circle this weekend were Kelsey Aikey and Shelby Nunn.

Each of the pitchers picked up four strikeouts against Auburn, which tallied seven strikeouts in the game. Aikey had 15 other strikeouts this weekend with a total of 19 in four games.

“We started and finished the tournament producing a lot of runs,” Tudor said in the release. “While we need to get more consistency throughout our offense, I am proud of how we scored

when needed this weekend. Our circle was very strong almost all tournament delivering a lot of swing and misses.”

The 4-1 performance from the Lady Toppers matched the program’s best start to a season since 2015.

“We learned a lot this weekend and have areas to build on and several areas to improve as we move on to Western Illinois,” Tudor said in the release.

The Lady Toppers will take on Western Illinois at home this weekend in a three-game series beginning Saturday at 1 p.m.