Hilltoppers get third victory without Stansbury against MTSU 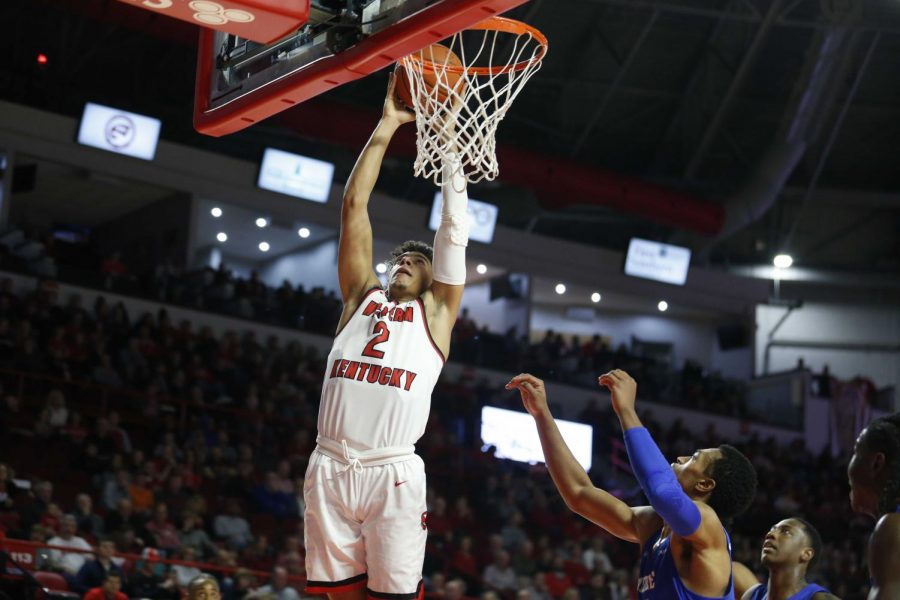 The WKU men’s basketball team took down its rival on Thursday night, defeating Middle Tennessee State 71-63, moving the team to 3-0 in the games that head coach Rick Stansbury has been out with a back issue.

Director of Basketball Operations Talvis Franklin said that he liked the maturity the Hilltoppers played with in the victory.

“I see a team growing up in front of our eyes down the stretch,” Franklin said. “We’ve had some adversity arise and let some teams make some runs in the second half, but we’re learning how to finish those games. I just love the resiliency this team is playing with.”

WKU held the Blue Raiders to just 34 percent shooting on just nine assists. WKU shot the ball well, hitting 10 3-pointer and shooting 47 percent from the field. A 46-30 rebounding advantage kept the Blue Raiders in the game.

Savage was not pleased with the first half effort, but said the team brought the energy in the second to finish off the Blue Raiders.

“I think we played a little sluggish in the first half,” Savage said. “Coach got on us pretty good at half time and we came out and played with energy. That’s what it takes to win. You saw that.”

Lamonte Bearden got the scoring started for WKU with a layup. Sims responded immediately for MTSU with a 3-pointer.

Bearden continued his early game energy with an offensive rebound and acrobatic finish. The Hilltoppers held a 6-5 lead at the first media timeout of the half.

Green gave MTSU back the lead with his first 3-pointer of the game. Savage would hit a free throw on the other end to make it a one point MTSU advantage.

Anderson knocked in his first 3-pointer of the game to swing the advantage back to the Hilltoppers. Hollingsworth kept the hot streak going from behind the arc to extend the WKU lead.

Both teams kept up the hot offensive start and the Hilltoppers held a 15-12 lead at the second media timeout.

The Blue Raiders cut the lead to one after a 3-pointer from Sims. Scurry dunked it home to give MTSU a 23-22 lead with six minutes left to go in the half.

In the midst of a 14-2 run, the Blue Raiders flipped the advantage and had their biggest lead of the game. MTSU led 28-22 with five minutes to go in the first half.

Bassey broke the scoreless streak for the Hilltoppers with a slam dunk. The Blue Raiders maintained their six point lead into the final media timeout of the half.

After a hot start for both teams, the shooting cooled down considerably as the half went on. WKU shot a meager 41.4 percent from the floor in the first. MTSU was no better at 38.7 percent itself, however, the Blue Raiders dominated the glass, holding a 21-15 halftime advantage.

Savage led the Hilltoppers with seven first half points and six boards. Bassey scored six points and blocked a shot.

The Hilltoppers started the second half on fire, going on a 17-3 run immediately out of the gate.

Hollingsworth got the half started with a 3-pointer to bring the Hilltoppers within a point before Savage knocked in a 3-pointer the next possession to give WKU the lead and force an MTSU timeout.

Bearden knocked in the third 3-pointer in a row for WKU to extend the lead and MTSU called another timeout after an Anderson layup extended the WKU lead to seven.

WKU did not let up on offense. The Hilltoppers had made five straight field goals after a Savage 3-pointer and held an 11 point lead.

The Blue Raiders came back a little following the WKU run. A Scurry dunk brought the lead to seven with 11:31 left in the game and MTSU put together a 7-0 run after a Green made 3-pointer to draw within two.

Savage immediately responded with a 3-pointer of his own. WKU owned a five point lead with 8:39 left and Bassey piled it on with a step-back jumper that extended the WKU lead to seven.

MTSU wouldn’t go away. Sims knocked in a 3-pointer to keep the Blue Raiders hanging around only down six before Hollingsworth responded with a bank-in 3-pointer at the end of the shot clock to halt the Blue Raider surge.

Green hit another 3-pointer to keep MTSU within striking distance.

Anderson hit a 3-pointer to beat the shot clock and put the Hilltoppers up six.

While the Blue Raiders were kept in the game late due to their offensive rebounding, the Hilltoppers were able to finish them off with free throws.

Bearden said that he credits the defensive intensity for sparking the second half run.

“We preached defense in the locker room,” Bearden said. “And energy, so that’s what we came out and did.”

With the win, the Hilltoppers advance to 16-10 on the season and 9-4 in conference play. WKU will take on Alabama-Birmingham Saturday afternoon at Diddle Arena. Tipoff is scheduled for 2:00 p.m.