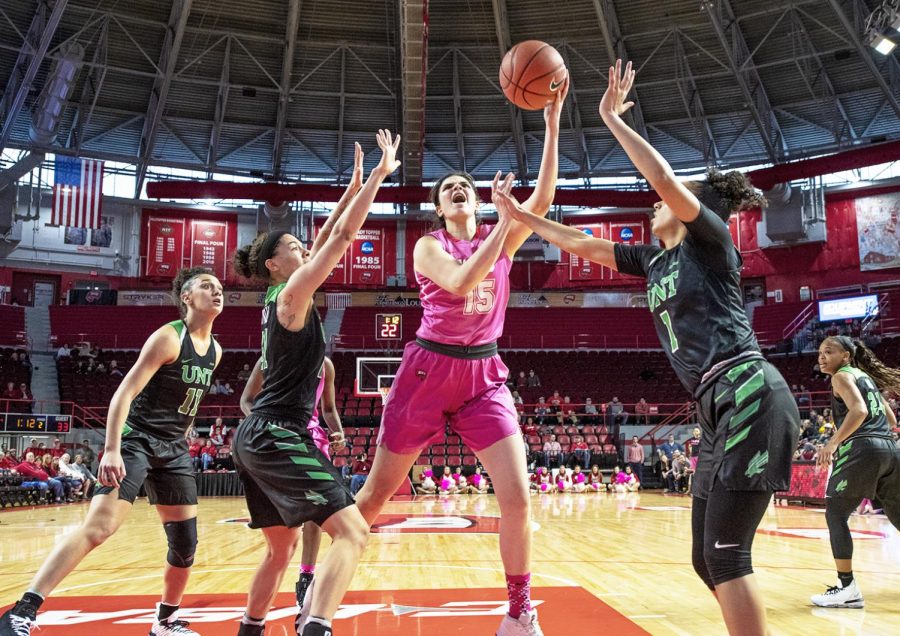 WKU forward Raneem Elgedawy (15) puts up a shot against North Texas on Saturday. Elgedawy scored a team-high 14 points and seven rebounds in the 76-67 loss to the Mean Green at Diddle Arena.

Instead, WKU (14-11, 8-3 C-USA) raised eyebrows by dropping two straight conference games inside Diddle Arena for the first time since the 2012-13 season.

“We don’t rebound, we don’t box out, we don’t defend,” head coach Greg Collins said. “We still have a greater sense of pride in our ability to shoot the ball than we do getting stops … We were trying to do things on defense to hide the fact that we don’t want to guard in the post, that we don’t want to box out, and so, those are things that we have to become committed to, or we’re going to be a very average ball club.”

The Lady Toppers struggled to get much going against Rice and North Texas thanks to massive deficits on the glass and two straight out-of-character performances from redshirt junior forward Dee Givens.

The Owls out-rebounded the Lady Toppers 40-23 on Thursday, dominating the glass in an easygoing 22-point road win.

The Mean Green rattled off a 16-0 run in the fourth quarter on Saturday, while WKU came up short inside and was out-rebounded 37-24 in a nine-point home loss.

“It’s not a secret,” Collins said. “I mean, if you look at the statistics, you know that when you play Western Kentucky, crash the boards, attack the basket, you can score, and you can rebound. We’ve tried to make sure we get stronger in that area instead of weaker, but we’ve not made a personal commitment.”

Junior guard Whitney Creech, who posted a pair of solid performances for WKU, said the Lady Toppers can rectify their rebounding woes by giving better effort.

“I just think, really, we need to work on being more aggressive and just putting a body on someone, boxing them out and just going to get that board,” Creech said. “I think we’re passive sometimes on the boards. We want the ball to come to us, but we have to be the aggressor and go get the ball.”

Meanwhile, Givens was not herself, as one of C-USA’s leading scorers shot a collective 3-of-19 from the floor and notched only 12 total points across two contests. Givens was visibly frustrated at times, picking up a technical foul against Rice.

Collins said that while WKU is a much more formidable team when Givens is scoring, the Lady Toppers have become too reliant on her ability to create offense.

“Dee’s clearly one of the best shooters in the conference, if not one of the best in the country,” Collins said. “Defensively, that’s not a hard game plan. You make sure she doesn’t get quick touches, and that’s one of the easier things to do on defense—follow a good shooter around—and so that’s what they’re doing.”

Following two straight losses at home, WKU has only five regular season games remaining. The Lady Toppers’ race to the finish line will not be a breeze, as each of their next four games will be played away from the friendly confines of Diddle Arena.

WKU, currently slotted fourth in C-USA standings, will begin its quest to secure a top-four finish and first-round bye in the C-USA Tournament this week against Middle Tennessee (18-6, 9-2 C-USA) and Alabama-Birmingham (19-5, 7-4 C-USA). Second-place MTSU is the second-ranked scoring defense in C-USA play. Sixth-place UAB is the third-best scoring defense in C-USA play. The Blue Raiders are led by A’Queen Hayes, who is averaging 15.4 points and 9.0 rebounds in league action, while the Blazers boast one of the conference’s best 3-point shooters in Rachael Childress.

Collins said his players must get tougher to see better results moving forward.

“To be honest, I think right now we have players that if they score 18 points and we lose, they’re OK. And that’s not OK,” Collins said. “I’d rather have a player that scored 22 and lost and was mad … We’ve got to make sure we get everybody on the same page—that the purpose here is for the team to do well, not individuals.”

WKU will try to get back on track Thursday at 6:30 p.m. in Murfreesboro, Tennessee.