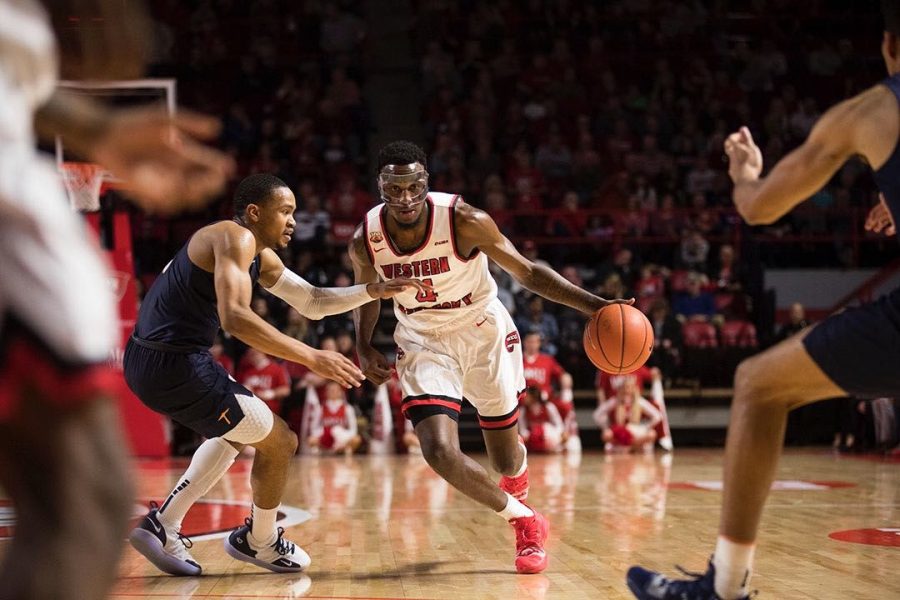 WKU guard Josh Anderson drives to the basket during the Hilltoppers 76-59 win over UTEP at Diddle Arena on Feb. 2, 2019. Abigail Dollins/ HERALD

The Hilltoppers struck gold after 40 minutes of digging with a 76-59 win over the Texas-El Paso Miners. The Hilltoppers moved to 6-4 in Conference USA play with the win.

Guard Nigel Hawkins scored 17 points for the Miners. Backup guard Evan Gilyard scored 16 points off the bench. C-USA’s second leading rebounder Efe Odigie struggled with just eight points on 4/13 shooting and only four rebounds, after having 22 points and 20 rebounds in the Miners’ last game against Marshall.

Bassey saw the tough matchup as an opportunity to step up on defense.

“He’s got 40 pounds on me,” Bassey said. “He was really strong. I just had to bring up my mentality to play defense and do everything I need to do to get a win.”

For the second game in a row, WKU turned it over less than 10 times. Head coach Rick Stansbury said that he sees the play of Lamonte Bearden at point guard as a key to the Hilltoppers’ ball security.

The Hilltoppers started hot from the field. WKU led 7-4 early making three of its first five shots. Bassey continued his offensive success with four points out the gate.

The play got sloppier as the half went on. Both teams went over two minutes without scoring. Hawkins would tie the score at seven with the Miners’ first 3-pointer of the game.

Jake Ohmer drilled a 3-pointer to put the Hilltoppers up three with 11:40 left in the half. Neither team could get it going on offense, with WKU shooting a mere 33 percent and the Miners only at 25 percent from the floor.

A 2-for-10 slump from the field by the Hilltoppers allowed the Miners hang around and tie the game at 16. Hawkins carried the UTEP offense with eight points and a couple 3-pointers.

Hawkins made a pair of free throws to give the Miners a 20-18 lead with under eight minutes left in the half before Anderson got the crowd back into the game with an emphatic dunk to tie the game.

With WKU struggling to shoot the ball, Anderson saw an opportunity to attack the bucket.

“Anytime you see guys not really making shots, it’s always a good choice to go to the rim,” Anderson said. “That’s a high percentage shot, so that’s what I was doing. Just being aggressive and driving to the goal.”

Anderson scored six straight to put the Hilltoppers back on top and forced the first UTEP timeout.

Bassey cleaned up an Anderson free throw to extend the WKU lead to eight.

Anderson got a basket and foul to give WKU its largest lead of the game at ten.

UTEP cut into the WKU lead thanks to four straight points from Evan Gilyard and moved within three after a jumper from Kobe Magee.

UTEP’s 12 bench points kept them within striking distance. WKU cashed in at the free throw line with 11 makes to just five for the Miners.

After a Jared Savage bucket and foul, UTEP ripped off five straight points to pull within two.

Anderson converted an alley-oop that got the crowd on its feet and extended the WKU lead back to seven.

UTEP finally called a timeout to slow a 7-0 WKU run. The Hilltoppers led 50-41 with 13 minutes remaining.

WKU got the lead to as much as 11, but a 3-pointer from Gilyard cut the advantage to seven and a few more buckets cut it to four.

WKU responded immediately to the Miners’ run. A Bassey dunk and Dalano Banton bucket and foul gave the Hilltoppers a 10-point lead with 7:39 left.

At the final media timeout, WKU maintained a 10-point lead.

Savage hit back-to-back dagger 3-pointers with 2:14 left to give WKU a 14-point lead and the Hilltoppers finished off the game to get the 76-59 victory.

Next up, the Hilltoppers will travel to Rice University to take on the Owls on Thursday night at 8:00 p.m.