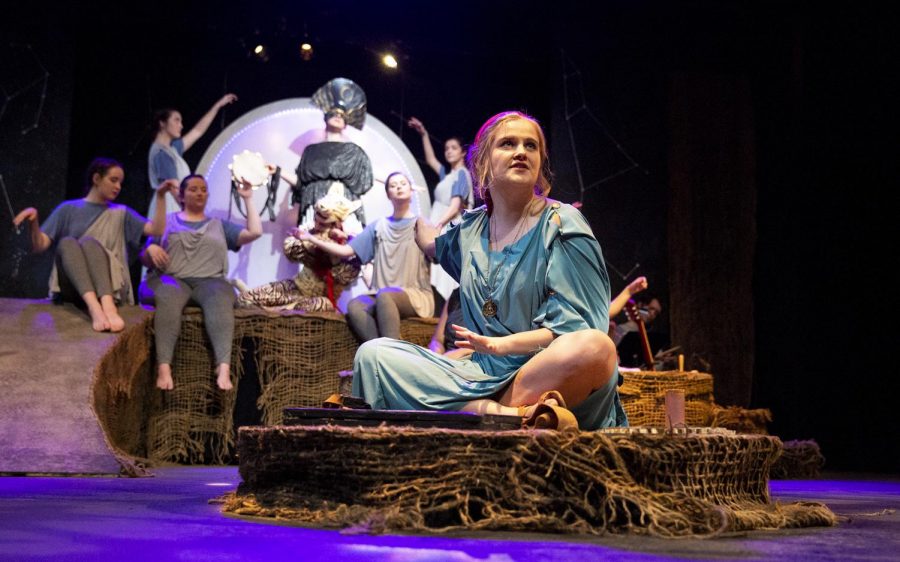 Algaonike’s Tiger will be performed at Gordon Wilsons Hall in the black box theater Feb. 21 through the 25.

During a WKU Department of Theatre and Dance production, students were able to closely work with the playwright to adapt it for the university.

“Aglaonike’s Tiger” began its six-day run with a show Thursday, Feb. 21. The show, written by Claudia Barnett, takes on concepts of gender in ancient Greece, superstition and science.

The play surrounds the story of the ancient Greek astronomer Aglaonike and her studies of moon patterns. In a twist on the historical basis of the play, “Aglaonike’s Tiger” included magical elements added to a realistic ancient Greek setting.

Director Carol Jordan said playwright Barnett was closely involved in WKU’s production of the play and was welcome to the liberties the department took with the play.

One such change was the expansion of the cast size to 15 from the original six characters written. Jordan said the play features original music composed by student Hilarie Spangler, who served as the assistant director, composer and musical director for the production.

Jordan said one of her reasons for choosing “Aglaonike’s Tiger” was the potential of bringing Barnett in to work on the show.

“I think that that’s a really important opportunity for students to actually work with a living playwright who’s there and part of the process,” Jordan said. Jordan described Barnett as marvelous to work with and said she was able to email Barnett about casting, adjustments in staging and that the two of them would go back and forth in dialogue.

“We were looking for a new play,” Jordan said. “We wanted to not just do the classics but also introduce new works and give our students a chance to work with pieces that are more experimental and cutting edge.”

Jordan said the play made her excited, because the play and its production were not constrained by a requirement to be realistic.

“There’s all kinds of movement, characters evolve into other characters on stage, things appear and disappear, and it creates a lot of freedom,” Jordan said. “It allows us to push our actors to types of acting that they don’t do in traditional play.”

Jordan said the show took on the concepts of gender in ancient Greece and pushed the boundaries that lie between superstition and science.

“Because she was female, she had to sell herself as a witch and a sorceress to be taken seriously,” Jordan said. “What Claudia Barnett has done is taken that concept and created this sort of fantastical world that holds the historical realities but also some magical elements as well.”

Louisville junior Natalie Thompson served as stage manager for the play and discussed her own experience working closely with the production.

Thompson said the show was the fastest she has put together. With six weeks in total to prepare, preliminary rehearsals spanned the two weeks during the fall semester between Thanksgiving break and finals.

“When we got back to school, we had only a month before we opened,” she said. “We had about three weeks of regular rehearsals, and then we had a week of tech before we started the show.”

Thompson said one of the biggest challenges of the show was putting it together in such a short amount of time and literally making magic on stage. Magical effects in the show included making things appear and disappear.

She said one of the most rewarding parts of her experience with “Aglaonike’s Tiger” was forming connections with actors with whom she had not previously worked and watching them grow throughout the performance.

“It’s been really challenging and rewarding,” Thompson said. “And I think it turned out beautifully, especially given the time crunch that we were under.”