Sans Stansbury, WKU takes down Rice on the road 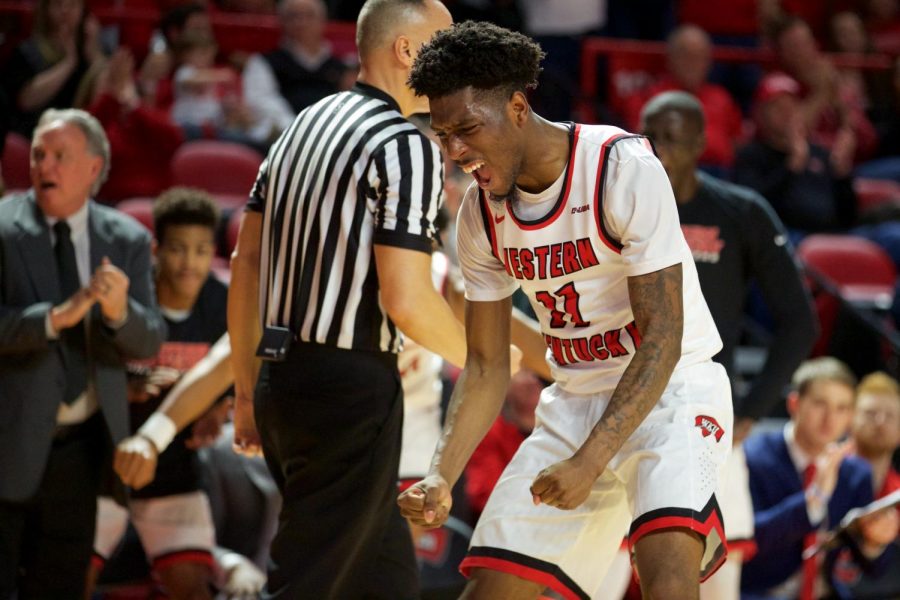 The WKU men’s basketball team won a thriller over the Rice Owls on Thursday night, 92-85, a game that took the Hilltoppers not one, but two overtimes to finish off the Owls.

The Hilltoppers were forced to make a comeback late in the second half, and were without head coach Rick Stansbury, who was unable to coach due to a back issue. WKU was instead led by assistant coach Mark Hsu.

“I think it just takes grit,” senior guard Lamonte Bearden said after the game. “We got to go out and play together. Like you said, we were down 13 in the second half but we never gave up on each other.”

WKU got off to a hot start, scoring the first nine points of the game. Thanks to multiple buckets from Bearden, the Hilltoppers maintained a 19-10 early.

Rice would fight back with a 11-2 run that put the Owls within one.

Junior forward Robert Martin hit a 3-pointer to tied the game at 28 all. The teams went back and forth the rest of the half.

Hollingsworth knocked in a jumper to give the Hilltoppers a two point halftime lead at 44-42.

Adams was on fire for Rice with 15 points and five 3-pointers. Junior forward Robert Martin scored seven points off the bench.

WKU came out of the locker room playing poorly, only hitting three of its first 13 shots and with 7:39 left in the game, the Owls held a 70-57 advantage over the Hilltoppers.

The Hilltoppers would storm back on a 14-0 run to take the lead with 1:02 left in the game thanks to a Savage 3-pointer.

“It was do or die time,” Savage said after the game. “If we didn’t make a run then, we weren’t gonna to make one and we were gonna lose.”

Chris Mullins would go one of two at the line to tie the game at 71. Anderson missed a half court heave, and the game was headed to overtime.

Sophomore guard Taveion Hollingsworth hit a pair of free throws late in overtime to give the Hilltoppers a three point lead. But Adams hit another 3-pointer to send the game into a second overtime.

Bearden opened the second overtime up with a 3-pointer and the Hilltoppers never looked back, cruising to a 92-85 win.

The Hilltoppers moved to 14-10 on the season and 7-4 in conference play with the win and will square off at North Texas on Saturday at 5:00 p.m.