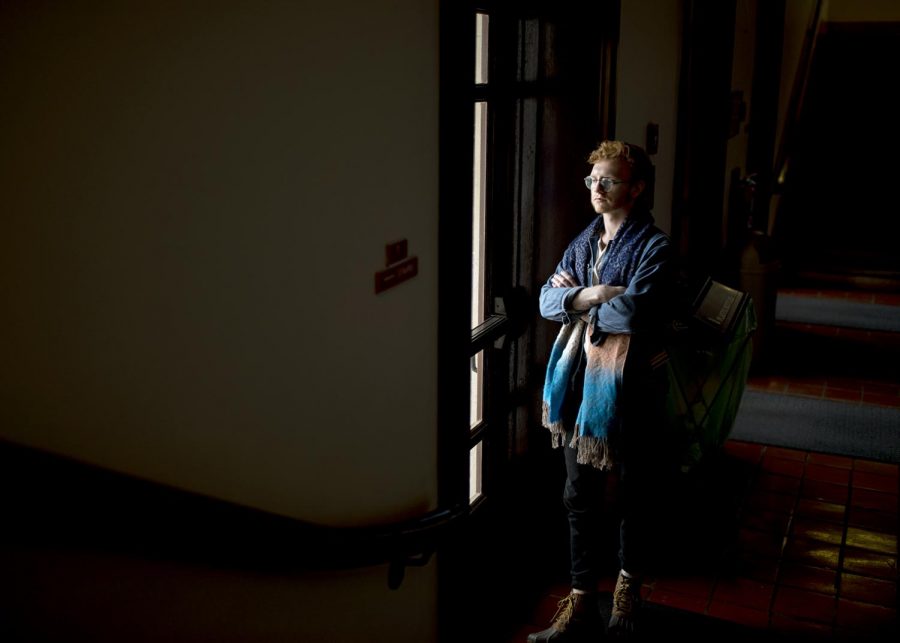 Nicholas Struck, 21, of Louisville, Ky., is a performing arts major with an acting concentration and is involved in acting, directing, producing, and play writing. "I like being able to tell stories and sometimes my own," Struck said.

“Making theater” is something senior Nick Struck is passionate about.

Originally from Louisville, Struck grew up in theatre and is now pursuing a degree in Performing Arts with a concentration in acting. At only 7 years old, his grandmother gave him his start in acting when she asked him to perform in her LGBTQ choir’s Christmas concert. He said he hasn’t stopped since.

But there is more to Struck than just acting. He has also tried his hand at playwriting, which led him places he didn’t expect to go. He said his writing began long before college and has only improved since.

Struck said his inspiration for writing comes from a vast range of places. When he doesn’t have an idea but wants to write something, he said he listens to music he’s never heard before, reads poetry and looks at the news to see what is going on in the world. Other times, he said ideas come to him while he’s lying in bed, which leads him to grab his phone and start typing the ideas out.

Struck is currently working on his honors capstone thesis, “Transcendence,” a performance piece that focuses on how people connect and how a community is built. His piece builds off the tragedy of 9/11 and interviews he conducted with those who have been affected by it. He said he’s been working on the piece for years, and he’s glad to finally be developing it.

“Transcendence” is not the only noteworthy play Struck has written, however. His play “Contemporary Company” has been produced more than once and has reached as far as The University of East Anglia in Norwich, England, and the Barter Theatre in Virginia. The play has been worked on by professional directors and performed by professional actors.

“It’s a fun piece, and I really love working on it,” Struck said. “The most rewarding thing is being able to see your work on stage.”

“The theater world is both simultaneously a big, scary place and also the smallest world imaginable,” Struck said.

Struck said he doesn’t plan to let this get in his way, though, and Michelle Dvoskin, the theatre program coordinator, said she sees great things ahead for Struck.

Dvoskin said she found Struck to be a hard-working person who wanted to make the world a better place through performance.

“He’s quite talented in a variety of areas,” Dvoskin said in an email. “I strongly suspect he’ll find a path in theatre that allows him to combine his passion for creating work as a writer and director with his love of acting.”

As for his plans after he graduates, Struck said he himself doesn’t have an answer. He has applied for internships and apprenticeships but also has plans to spend a year in New York with a friend. From there, he said he “had no clue.”

Struck said he wants to take it step-by-step and figure things out as they come along, finding opportunities and creating them for himself. He said he wants to find a way to be an artist and create what he feels called to create.

Jacey Fears, a friend of Struck, described him as “one of the most extraordinary artists” she knows.

While Struck said he does not know what is in store for him, he said he’s ready to continue writing and learning along the way.

“I still feel like I’m new to this,” Struck said. “I’m a young playwright, and there is still so much for me to learn.”