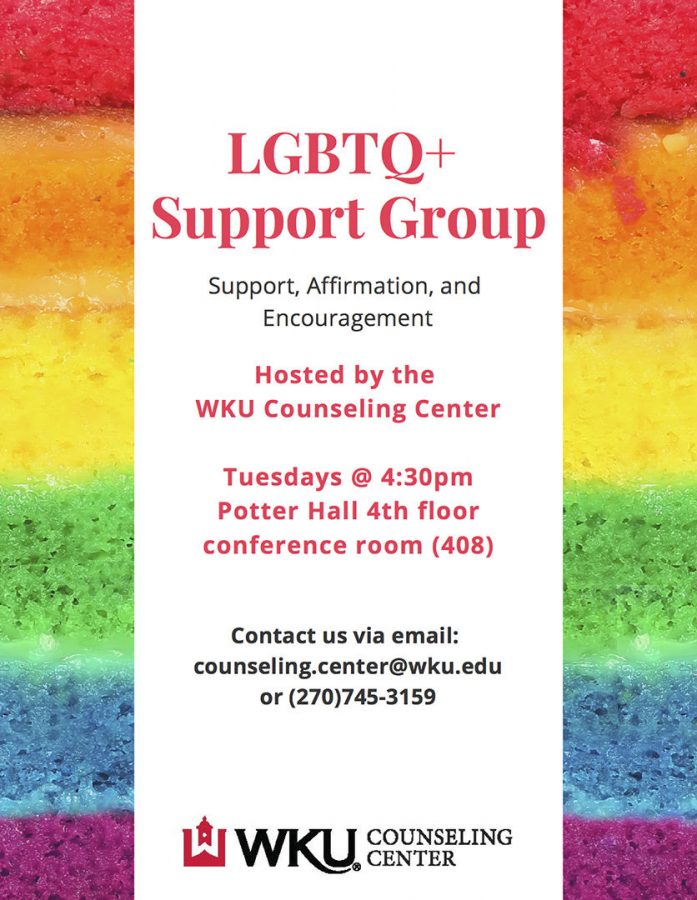 In order to provide a sense of support and community, the WKU Counseling and Testing Center has started a support group led by clinical staff for LGBTQ students.

Peggy Crowe, director of the CTC, said its support group discussions are based on topics such as coming out, family, relationships and wellness.

Noah Moore, a sophomore from Fort Thomas, Kentucky, studying Arabic, Spanish and public relations, is a member of the LGBTQ community and identifies as gay. He said his experience as part of the community has both affected him a lot and not at all.

Moore said he sees himself as no different from anyone else, but he knows others might stereotype him due to his sexuality. He said these stereotypes and stigmas stick out and can affect him and other members of the community negatively.

“I think the best way to address this is to encourage others to see each other as people, not as the differences that divide us,” Moore said.

He said he also thinks support groups provide an opportunity to listen to others’ struggles and help eliminate biases, creating positive change to make a “more communal campus and world.”

Laci Thompson, a junior nursing major, said she struggled with figuring out her sexuality as a freshman and felt really alone during that time. She said she was too shy to branch out and join LGBTQ support groups but instead became a member of the Greek community.

“I was afraid they wouldn’t treat me the same once my whole organization knew, but in the end, I felt more accepted than ever,” Thompson said.

Other struggles Thompson said she has dealt with include being referred to as “the lesbian girl” instead of by her actual name.

She said while her personal support group is her Greek organization, she also thinks LGBTQ support groups are resourceful and helpful for members of that community. She said she believes the purpose of support groups is for students to be able to reach out if they are questioning their sexuality or simply looking for a group of friends.

Jayden Thomas, a chairperson of the Queer Student Union studying political science and international affairs, said he believes there is a noticeable difference between being LGBTQ in a rural community versus an urban community, as rural communities tend to be less exposed to LGBTQ issues.

Thomas included that he believes many LGBTQ students begin coming to terms with their identity during college and often worry about support back home.

“When having to suppress your identity, how do you deal with that?” Thomas said.

He said he encourages students to find support groups to talk with peers and listen to their past experiences, because it’s likely someone has already been through what they’re going through.