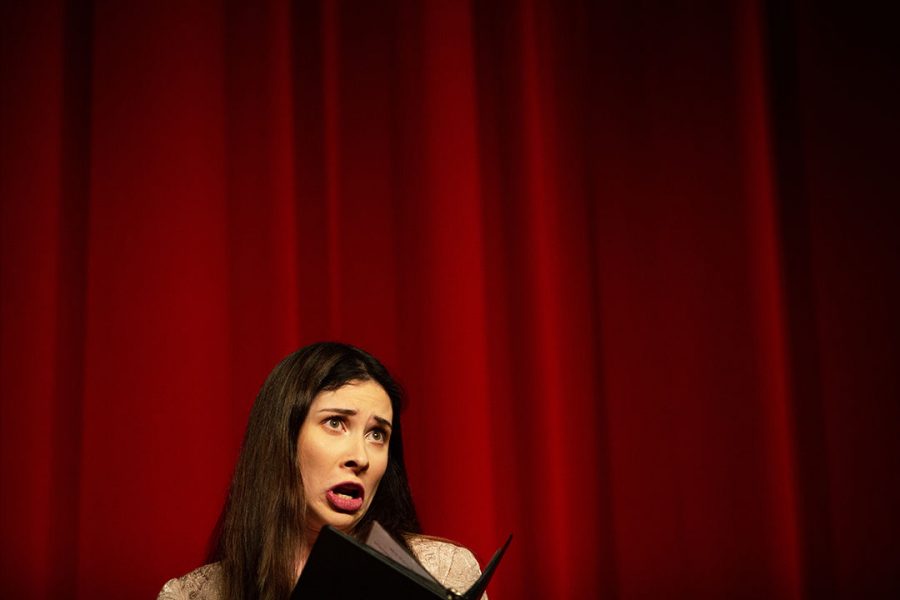 Faith LoPiccolo performs a speech on Feb. 26, 2019 at the DSU auditorium during Bodies: reclaiming sexual anatomy. This event was presenting by the forensics team with discussions from Hope Harbor.

Everyone deserves to feel sexy, and Faith Lopiccolo is out to tell the world that.

Lopiccolo began working on the idea for “BODIES: Reclaiming Sexual Autonomy Performance Night” two years ago. She wanted to create an annual event that focused on sexual empowerment, which she had done forensics events about.

“This year, I picked an event that was focusing on sexual empowerment, and at every tournament I did it people were really intrigued, so I decided to broaden the audience and make it a full event, and then things just started falling into my lap,” Lopiccolo said.

The event, which took place on Tuesday at 7:15 p.m. in the DSU Auditorium, featured performances from several members of the WKU Forensics team. All acts centered on what it means to feel comfortable in one’s own skin.

The goal of the showcase is to inform on topics that are important to college students, even if they aren’t frequently discussed, performer Natalie Hedberg said.

“A lot of our performances deal with topics that aren’t often discussed but are prevalent in a college setting,” Hedberg said. “All of our performers have deep connections to their pieces and we hope that in sharing them, everyone involved will learn something.”

The showcase aimed to educate on the taboo topics that Hedberg said are prevalent in society, though not discussed.

“Whether they learn about someone else’s experience, how to talk about sexual assault survivors in a safe and uplifting way or learn about practical solutions, they can get involved in with organizations like Hope Harbor and BRASS,” Hedberg said. “When one in four women are survivors of sexual assault and eleven percent of college students are assaulted in college, it is crucial we discuss these issues and provide our campus with resources.”

The presentation began with an overall introduction to the event and what it all means.

“Bodies was formed in order to reclaim sexual autonomy,” performer Symone Whalin said. “Wanting to empower young adults on campus to embrace and explore their sexuality in a positive progressive way.”

Whalin said the purpose of the event is to promote healing, learning and personal growth. However, she as a performer also found growth from her experience with the showcase.

“I learned about being able to embrace the horrible things that go on in the world, but using the hurt and anger I have to fuel change,” Whalin said. “Knowing that my speech has the ability to provide needed information and start a wave of change is the best feeling.Learning that from this experience has been truly humbling and eye opening.”

For Lopiccolo, it was the power in the stories told during the showcase that held the power to teach not only the audience, but the performers and herself.

“I think the performers have learned comfortability mainly, these topics are so personal, so to share them with an audience of mostly strangers is powerful and stressful and beautiful,” Lopiccolo said. “I’ve learned, truly, how many stories people in and outside of Bowling Green have to tell, powerful stories too.”