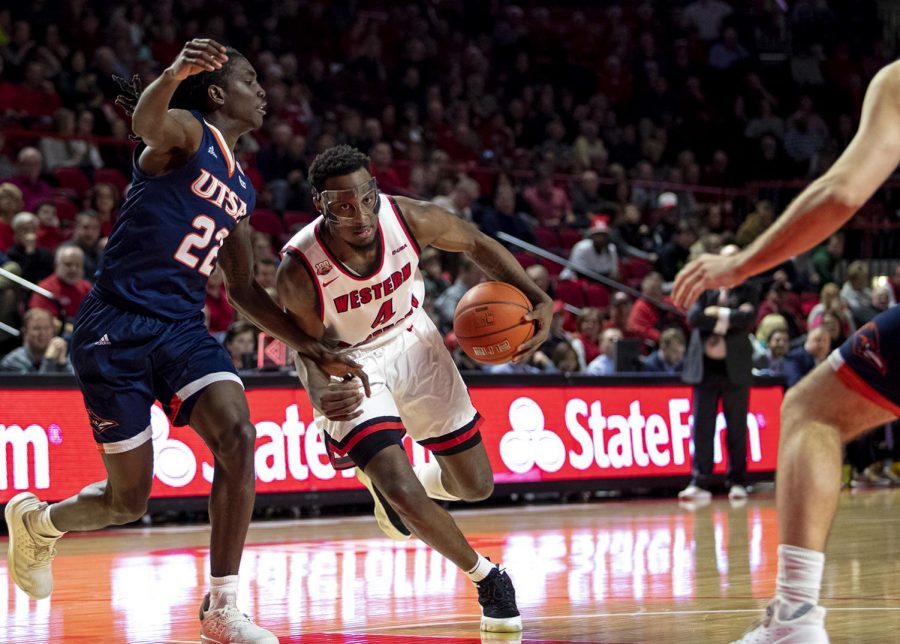 WKU guard Josh Anderson charges for the basket on Jan. 31, 2019 at Diddle Arena. The Hilltoppers pull a win against UTSA with a score of 96-88.

After sweeping their last home stand, the WKU men’s basketball team will head out to Texas for a pair of Lone Star state showdowns.

The Owls are coming back home after two games away from home. They defeated the Charlotte 49ers 65-61 last Thursday before dropping Saturday’s game to Old Dominion 80-76.

The Owls have four players have that average double-digit scoring. Freshman guard Chris Mullins leads the way with 12.7 points a game and 2.6 assists a game. Junior forward Robert Martin scores 12.1 PPG with 6.2 rebounds per game as well.

The Hilltoppers squared off with Rice only once last season, with the matchup taking place in Houston on Feb. 17 of last year. WKU blitzed the Owls with 48 first half points and breezed to an 85-66 win. Graduate transfer point guard Darius Thompson scored a game-high 18 points and dished out 10 assists for the double-double.

The latter of the two road games will tip-off on Saturday afternoon when the Hilltoppers take on North Texas. UNT enters the week 19-4 overall and 7-3 in conference play, putting them second to only Old Dominion atop the C-USA standings. The Mean Green are 169th in adjusted offensive efficiency and 106th in adjusted defensive efficiency according to KenPom statistics.

They are also coming home after splitting results in a pair of road contests. The Mean Green lost 72-61 at ODU on Thursday, but rebounded with a 73-66 win at Charlotte on Saturday. UNT will host Marshall on Thursday night prior to Saturday’s showdown.

The Mean Green have a balanced offensive attack, with six players averaging between 12 and 10 points a game. The most notable members of the team are junior guard Ryan Woolridge, freshman guard Umoja Gibson, and senior guard Michael Miller.

Last season, the Hilltoppers and Mean Green played an overtime thriller on Feb. 15 in Denton, Texas. WKU outlasted UNT 102-94. Then freshman Taveion Hollingsworth set his career high in points in a game with 30, including going 14 for 14 from the free throw line.

Tip-off for Thursday matchup is set for 8 p.m. For Saturday, the Hilltoppers will take the court at 5 p.m.