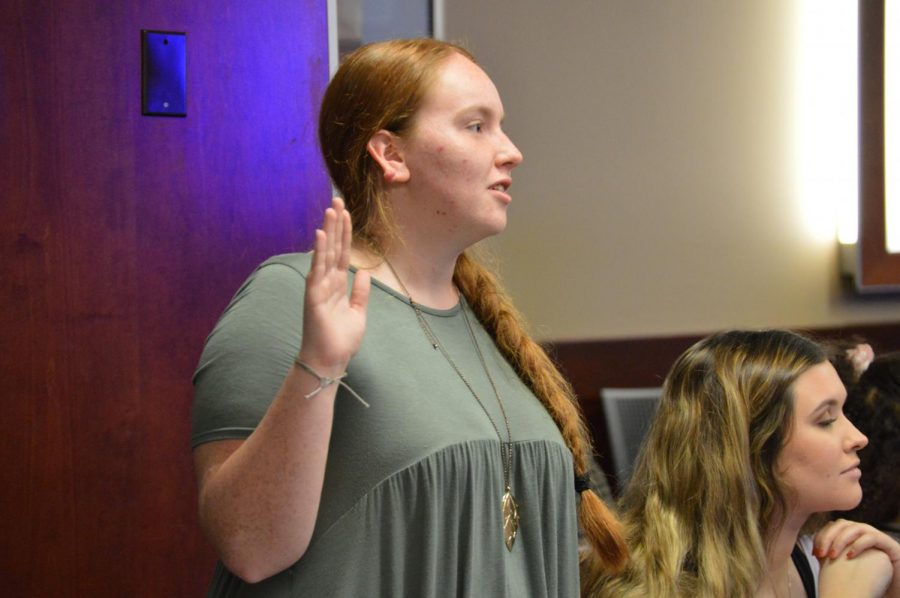 SGA Senator Amy Wyer being sworn in as SAVES Committee Chair, succeeding Brigid Stakelum. Wyer was appointed to the position by a 26-2 vote.

The Student Government Association welcomed eight new senators into office on Tuesday. The candidates were nominated by SGA President Stephen Mayer at the SGA meeting on January 29.

The nominees ranged in grade level from freshman to graduate student, and were all elected to the Senate in landslide votes.

“I’m glad I get to represent the students of Western,” newly-elected freshman Senator Parker Raybourne said. “I’m looking forward to joining the Committee for Academic and Student Affairs and maybe authoring some bills.”

In addition to the vacant Senate seats, appointments were made to two chair positions, public relations chair and the Chair of the SAVES Committee, which were vacated at the end of the Fall semester.

Ashlynn Evans was appointed to both the Senate and the Public Relations Chair positions by a 21-7 vote and the SAVES Chair position was filled by senior Amy Wyer in a 26-2 vote.

“Ideally, I want to help begin the foundation and decide what this committee is for,” Wyer said.

Aside from the numerous appointments, SGA also voted on several bills, the first pieces of legislation of the semester. The first bill, Bill 1-19-S, authored by Sustainability Committee Chair Jayden Thomas, called for the allocation of $50 to fund the appearance of Big Red at the Earth Day Festival this April. Bill 1-19-S was approved with a 28-0 vote.

Another Organizational Aid bill, Bill 4-19-S, allocated $500 each to the Mock Trial team, Global Brigades and Campus YMCA Congress. The bill was passed with a 26-0 vote.

SGA meets in the senate chambers of Downing Student Union every Tuesday at 5 p.m.

Editor’s note: A previous version of the caption of this story’s photo incorrectly stated the position Amy Wyer was sworn into. It has been corrected. The Herald regrets the error.