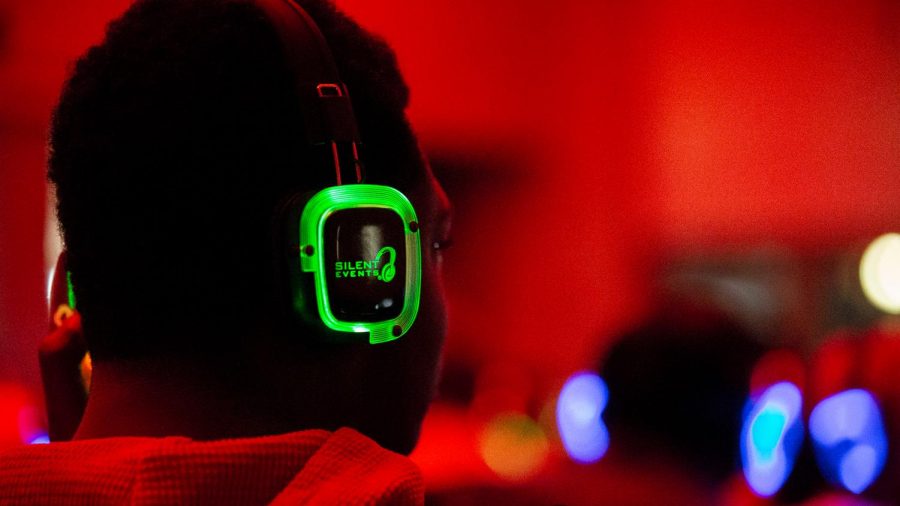 WKU students put on wireless headphones and enjoy a verity of music to dance to during the Silent Disco event at the Nite class in DSU on Wednesday 6, 2018. The event was hosted by the WKU Residence Hall Association, Resident Staff Association, National Residence Hall Honorary, and the Campus Activities Board.

Far from silent, students conversed, sang and dance during a silent disco hosted by Residence Life and the Campus Activities Board in the DSU multipurpose room Wednesday, Feb. 6.

Students put on light‐up headphones with three separate channels and adjustable volume. The color of the light on the headphones corresponded with the channel with which the user tuned in.

A red channel played hip‐hop hits such as “Yeah!” by Usher, the blue channel played the DJ’s “Top 40” songs such “Shake it Off” by Taylor Swift and the green one played musicals from movies such as “The Greatest Showman.”

The event started off with very little dancing or talking, but as more people came in, the scene grew livelier. Once the “Electric Slide” came on, everyone seemed to join in.

Nicholas Ditter, a residence hall director, said he initially heard about silent discos from the National Allegiance of Campus Activities.

“It’s been done at a lot of other schools,” Ditter said.

Douglas Tate, another member of RHA, said the silent disco is not a new event at WKU. He said WKU held a silence disco twice two years ago, and it’s been hosted for MASTER Plan.

“It’s always a huge crowd of people, but this is the first time we’ve done it in this space,” Tate said. “We’re excited at having more of a club atmosphere.”

The room was lit by colored strobe lights, had a snack and refreshments table and music was played by a DJ from the company Silent Events based out of Nashville.

The DJ, Katie Boyd, took song requests as long as they were clean. She said her company mostly does events at college campuses, but they also do holiday parties and corporate events across the country.

Freshman Sarah Terry said her expectations were low coming to this event.

On multiple occasions, numerous students tuned into the musical channel and broke out into theatrical song. “Seasons of Love” from the Broadway musical “Rent” was especially popular.

Kaanan Lightsy, a coordinator for the Campus Activities Board, helped organize the event which was their first of the semester.

“We just want to get all the students out and bring the campus together,” Lightsy said.

For students who want to get involved, CAB meets every other Monday in the SGA chambers at 8 p.m.

Olivia Harris, a DSU employee, said CAB hosts events in the activity room about every other night.

“We do karaoke nights, like trap karaoke too,” Harris said. “We do plays, skits, game nights, dancing. It’s something new everyday. Coming to events like this, you can talk to anyone, meet new people. It’s good to make connections.”