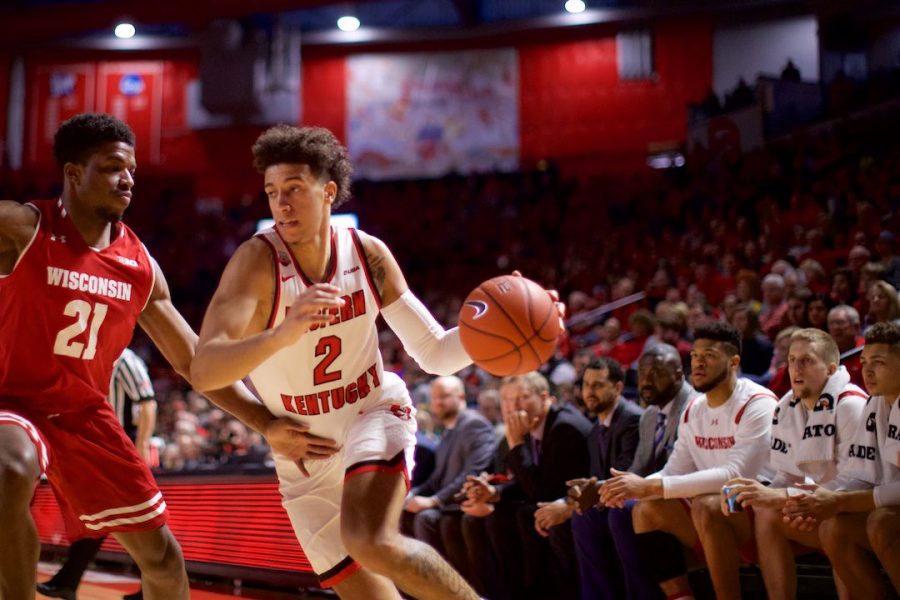 Wisconsin's bench watches as WKU's Jared Savage (2) drives in on Khalil Iverson (21) in Diddle Arena Dec. 29 in Bowling Green. Savage had 16 points and five rebounds in the win.

The WKU men’s basketball team will return home this week after a successful Texas roadtrip that resulted in two victories. Coming off the two wins, junior wing Jared Savage said the team is now trusting each other in order to finish games.

“We’re starting to trust each other as players and teammates,” Savage said. “Early in the season, it was one person trying to finish the game by themselves. You can’t do that. You got to play together. Especially against North Texas, we finished that game as a team.”

The Hilltoppers will face their biggest rival in Conference USA tonight. Middle Tennessee State comes to Diddle Arena with an 8-17 record overall and 5-7 record in conference play.

The Blue Raiders have struggled after head coach Kermit Davis left Murfreesboro to coach Ole Miss. However, the Blue Raiders have won three of their last four, including a sweep of Alabama-Birmingham. Old Dominion defeated MTSU 55-50 in its last contest.

Even with the Blue Raiders in the midst a poor season, Savage said that he isn’t taking them lightly.

“We never look at a team’s record when we play them,” Savage said. “It’s a college basketball team. They can play just like we can. So we just got to come in and focus and try to get this win.”

Junior guard Antonio Green has been the most consistent scorer for the Blue Raiders, averaging 18 points per game and shooting a team-high 85 percent from the free throw line. Sophomore guard Donovan Sims averages 11 points and game and dishes out a team-high 3.1 assists per game.

WKU has not beaten its rival in almost three years, with the last victory coming February of 2016.

Following MTSU, the Hilltoppers will stay at home for the final game on the current C-USA schedule against UAB. The Blazers enter the week at 14-11 overall and 6-6 in conference play.

The Blazers head into the final slate of C-USA games struggling. UAB has dropped its last four games, three of which came at home.

Senior forward Lewis Sullivan anchors the front court, leading the Blazers with 6.6 rebounds per game and scoring 11.2 points per game as well.

Last season, the Hilltoppers and Blazers faced off on three different occasions. After splitting the regular season series, the Hilltoppers took the rubber match in the Conference-USA tournament, 98-70.

“We need these two wins,” Anderson said. “So we’re going to come in on tomorrow and Saturday night and just focus and lock in.”

Tipoff for tonight’s matchup is set for 7:00 p.m. For Saturday, the Hilltoppers and Blazers is scheduled for 2 p.m. start.