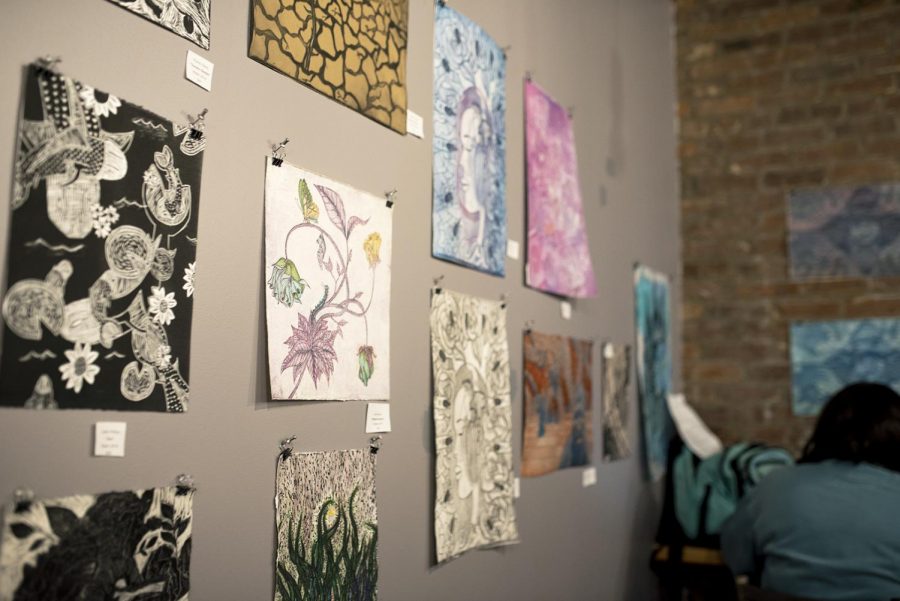 Spencer's Coffee hosts the WKU Printmaking Club showcase of completed artwork on Feb. 2, 2019. Each piece is for sale and will be on display until March.

Of all art forms specialized in at WKU, printmaking is perhaps one of the lesser-known. However, with proper technique and a story to tell, it often yields stunning results.

This is visible through an art showcase named the “WKU Student-Jury Printmaking Exhibition” located in Spencer’s Coffee. The showcase features work of various printmaking styles including intaglio and relief created by over 30 current WKU art majors and recent graduates.

WKU printmaking and art professor Marilee Salvator serves as the WKU Printmaking Club faculty adviser. She said she believes the showcase afforded many printmaking students a professional opportunity to display their art for the community. She said this community focus is especially relevant to the club.

“Printmaking is very community-based,” Salvator said. “[The print-making club is] like a special kind of community, sort of family.”

Though the showcase premiered in December, it will remain viewable along the walls of Spencer’s until mid-March. Coffeehouse owner Justin Shepherd said art has always been important to the shop.

“We’ve had art hanging here since the beginning,” Shepherd said. “We like to change it up every so often just to give customers the chance to check out different artists.”

Though Spencer’s originally intended to take down the current showcase during January, Shepherd said he and the shop’s staff enjoyed the showcase enough to keep it in-store awhile longer.

“We really like it,” Shepherd said. “It brings more life to the space.”

Printmaking Club President Bronwyn Liddle, an Elizabethtown junior, said she believes the showcase has remained for other reasons, too.

“I feel like the work that we have showcased here is all stuff that invites a lot of contemplation and really thinking about what’s going on,” Liddle said. “I’d like to think that’s why they wanted to keep it around longer.”

Liddle said almost every student in WKU’s printmaking program submitted work to the showcase, including herself. She said this allowed for an abundance of prints of varying subject matter to be displayed publicly.

“It’s definitely worth taking the time to go look at all of the pieces and really take them in,” Liddle said. “There are a lot of different stories being told.”

She included that many of these stories involve traumatic undertones regarding loss and mental illness. As for her work at the showcase, Liddle said much of it helped her cope effectively with the difficulties that served as inspiration.

“It’s both a way of helping myself work through things and also a way of trying to maybe help out someone else who’s been in the same boat that I’ve been in,” Liddle said. “I personally would like it if someone could look at some of my artwork and find something relatable.”

One of Liddle’s pieces covered the topic of self-reflection, which she represented via a relief print displaying a woman staring into a mirror. In observing the piece further, numerous details, such as wooden bones and demonic features, are reflected. Liddle said the personal nature of the work initially caused her to hesitate in displaying it.

“Creativity is something that’s so personal to all of us,” Liddle said. “And when you try and open that part of yourself up to other people, it’s really scary … Being an artist of any kind, it really does invite this level of vulnerability that you have to be OK with.”

She said Spencer’s Coffee’s tie to the community helped her overcome this worry, as she hopes the showcase reveals the oftentimes powerful capabilities of printmaking to a wider audience.

Spencer’s is a really familiar place,” Liddle said. “It feels like a safe place to show work that you might be a little nervous about, and it gets it in front of a lot of eyes, which is always really nice.”

Liddle said this drive to share work with the community is not only important to her but the entire printmaking club. She said she believes the act of sharing art inspires elevated confidence, which is vital to sharing personal struggles with others and raising awareness.

“One of the biggest things that in the club we want to do is help people be more confident in doing things in front of the community,” Liddle said. “Every time you have to engage with a stranger about art, it’s just another little brick in the wall of being confident.”