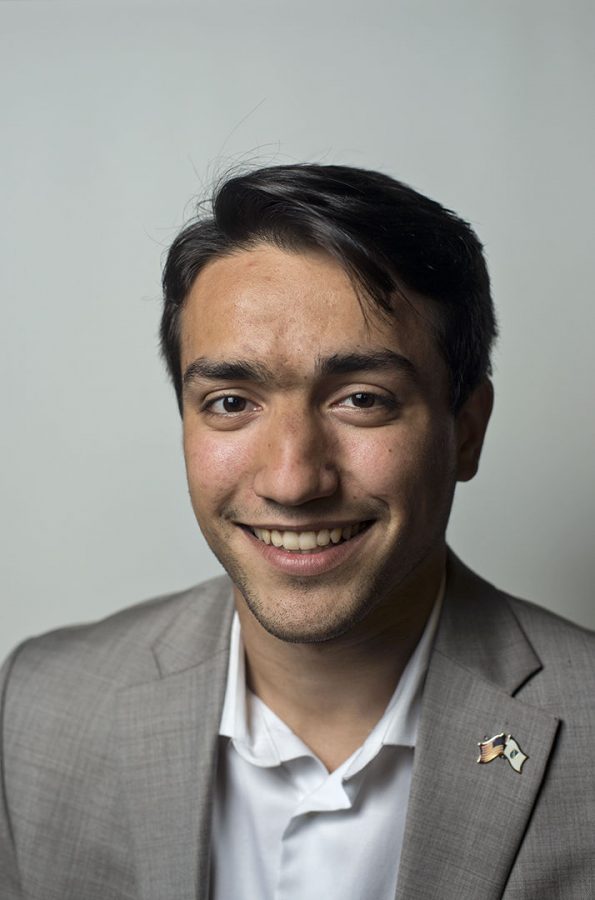 At 16 years old, learning to drive is hard enough, but imagine starting your own nonprofit.

That’s exactly what junior Kenan Mujkanovic of Bowling Green, a political science and economics major, did in October 2014 when he co-founded the Young Visionaries Foundation, a Bowling Green-based nonprofit of which he’s currently the CEO. With the intention to eventually expand the nonprofit’s reach to outside of Bowling Green and beyond, Mujkanovic said he realized he needed to start where he knew best.

“Before you can change the world, you gotta start with your corner,” Mujkanovic said.

The son of two Bosnian refugees, Mujkanovic said he grew up in a low-income household and had to teach himself to read and speak English. He said he used this knowledge to help his parents study for and pass the U.S. citizenship test when he was in third grade.

“I really came from nothing,” Mujkanovic said. “My parents didn’t know a lick of English when they got here. We didn’t have the ESL program in school until I was in third or fourth grade. By then, I already knew the language.”

Due to his experience with overcoming adversity from an early age, he said he decided he wanted to help others do the same at only 16 years old. Though many believed he was too young to make a legitimate impact in Bowling Green, he said he chose to act anyway.

“Everything that I’ve achieved in my life, it’s because I first told myself I could do it, and I believe in myself before anybody else had to tell me,” Mujkanovic said. “That’s all I needed.”

With the support of three jobs and help from a friend, Mujkanovic kick-started the Young Visionaries Foundation to provide leadership opportunities to youth in Bowling Green. Despite having to self-fund the foundation’s earliest projects, with now around 30 distinct projects in the foundation’s name in Kentucky and surrounding states, Mujkanovic said the foundation receives donations and local support.

Specific projects include an annual Thanksgiving turkey giveaway, where the foundation donates various canned goods and frozen turkeys to in-need families within the area, as well as a project planned for 30 days during the summer called “One Meal a Day.” During the 30 days, Mujkanovic said the foundation tackles the issue of hunger by providing free meals to homeless populations in cities like Bowling Green, Toledo, Ohio and Atlanta.

As projects have been proposed by people as young as 12 years old, Mujkanovic said anyone is capable of helping others. He said he believes doing that is beneficial to one’s personal growth.

“Whenever you’re helping somebody, you get this sense of fulfillment in yourself,” Mujkanovic said. “What I’ve done with that is I’ve inspired young kids to become leaders and not followers.”

On account of his commitment to service, Mujkanovic received an award in public service at the 2016 Jefferson Awards ceremony and a National Caring Award also in 2016 from the Caring Institute, an award previously received by the likes of former President Bill Clinton, Pope Francis and Muhammad Ali.

In addition to his work with the foundation, Mujkanovic founded his own online marketing firm, Visionary Media, which serves to aid businesses in their branding strategies, and independently published a book titled “Voices of Bowling Green: Tales of Young Visionaries” in December 2016 on Amazon.

Mujkanovic said the book discusses a tendency for children to lose sight of their dreams as they age, which he said he believes often leads to future disappointment. Mujkanovic said the book initially sold out in-store and online within 11 hours of its release and has since sold thousands of copies. He said he owes the book’s success to the city that inspired it.

“I kind of wanted to dedicate that to the city of Bowling Green,” Mujkanovic said. “I like to represent the city everywhere I go and in everything I do.”

Though Mujkanovic wrote the book during his freshman year of college amid 15 credit hours and jobs at United Way, Men’s Wearhouse and Jim and Gil’s Men’s Shop, he said a determination to succeed and inspire others drove him to compete the book all the while.

“My will and desire to succeed was more important to me than eating,” Mujkanovic said. “When you want to succeed as bad as you want to breathe, then you’ll be successful.”

The same message led Mujkanovic to Paris to present at a TEDx Talk on Monday, Feb. 18, at the Pôle Universitaire Léonard de Vinci. The theme of the talk was titled “Limitless,” which Mujkanovic said is a concept relevant to a book he’s currently working on, “Life Equals Perspective.”

He said he believes a person’s outlook on life determines how they perceive their “limits” or lack thereof, and he’s grateful to have shared such a message on a global scale.

“Knowing that where I came from, it’s just kind of very humbling for me,” Mujkanovic said. “I will say to this day I am proud that I am from Bowling Green, Kentucky. This is my city, and I’m willing to do whatever it takes to put it on the map.”

Bowling Green native Zak Ahmed, a junior at Bowling Green State University in Bowling Green, Ohio, is the COO and co-founder of the Young Visionaries Foundation and chief design officer of Visionary Media. Ahmed has known Mujkanovic since he was 9 years old and said Mujkanovic has always been driven to lead.

“With that work ethic and that attitude, we can really go far,” Ahmed said. “He just spits the motivation.”

Due to Mujkanovic’s interest in public speaking, Ahmed said he helped arrange the TEDx opportunity, which he attended, as well. He said he believes Mujkanovic excels in speaking publicly due to his ability to inspire an audience.

“He’s just a great person to look up to,” Ahmed said.

Director of Student Activities Charley Pride has served as an adviser to Mujkanovic during his tenure as a WKU Student Government Association senator. He said he’s impressed by Mujkanovic’s commitment to service and hard work.

“It’s incredible, some of the stuff he’s done,” Pride said.

Pride said he believes Mujkanovic has helped motivate others within the community to work diligently and for the good of those less fortunate.

“There are people out there that are doing a lot of good,” Pride said about the influence of Mujkanovic’s example. “He seems committed to making things better.”

Parrigin said she believes Mujkanovic’s leadership potential and interest in the well-being of others separates him from most other young adults.

She added that she believes Mujkanovic’s influence as a minority leader in Bowling Green sets an inspirational tone, and she’s ready to see what he has in store.

“Having Kenan step up to these leadership roles just adds more value to our community,” Parrigin said. “I am proud to be a friend of Kenan’s.”

For now, Mujkanovic said he plans to continue expanding his foundation and overall brand, Kenan Inspires, which serves as his personal hub regarding all things public speaking, and hopes to eventually attend law school and run for political office.

He said his commitment to serving others will propel him forward in the meantime.

“I live my life with one purpose, and that is to inspire people,” Mujkanovic said. “It makes me happy, and it’s because I get to make other people happy.”