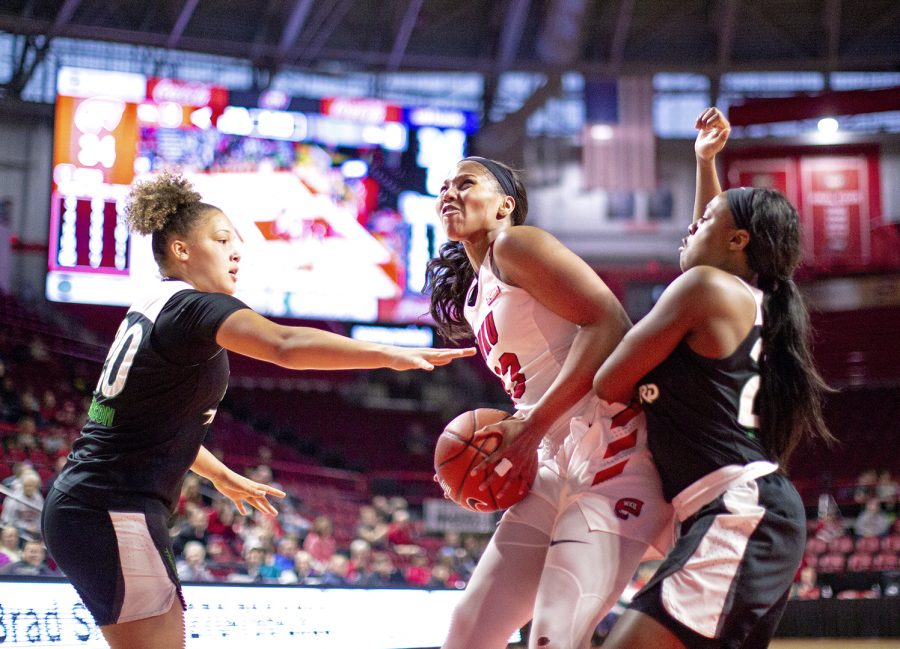 Freshman forward Jae'Lisa Allen charges toward the hoop during the Lady Toppers'game against Marshall on Jan. 12, 2019.

Prior to last week’s excursion to West Texas, the WKU women’s basketball team had not fared particularly well during its road trips to the Lone Star State. WKU had posted a 2-3 record in road games against Texas-San Antonio (6-15, 1-8 C-USA) and Texas-El Paso (4-18, 1-8 C-USA) since joining Conference USA in 2014-15.

The Lady Toppers had never won in San Antonio and dropped last year’s regular-season finale in El Paso, which cost WKU a share of the C-USA regular season crown.

“I think there are a lot of competitive teams in this conference,” head coach Greg Collins said. “There are a lot of teams that play better, like everybody else, at home, and it’s a tough road trip … They get some energy from the crowd, and so, it’s always a challenge, and we’re looking forward to that challenge. It’ll be another test for this team.”

Defeating both the Roadrunners and Miners was far from a forgone conclusion, but the Lady Toppers knew they had to rid themselves of past woes and reverse their curse. WKU began blazing a path to that goal against UTSA on Thursday.

The Lady Toppers silenced an early-morning crowd, shooting 46 percent from the floor and 43 percent from deep. WKU also won the rebounding battle 31-29. WKU was no Wile E. Coyote, as the Lady Toppers foiled the Roadrunners in short order and scored the program’s first-ever win inside the UTSA Convocation Center, 81-62. Collins said he was proud of his team’s effort in what could have been a trap game.

“It was a great atmosphere with all the kids in here,” Collins said. “There were probably two or three thousand kids making a lot of noise, and so, obviously, if we don’t get off to a great start, then the game stays real close, and there’s a lot of energy in the gym for them. And so, we kind of took some of that steam out of that air and got rolling early.”

The Lady Toppers appeared ready to run UTEP off the court two days later on Sunday, but WKU was in for more of a fight than the team could have ever expected.

After leading the Miners by 10 points in the first quarter, the Lady Toppers trailed UTEP by 12 in the second period. WKU played from behind for most of the contest but stayed in the game thanks to the foul line. The Lady Toppers went 13-for-15 from the charity stripe in the fourth quarter and got away from the Don Haskins Center with a win, 64-61.

“I told them that we didn’t play our best game, but you played hard, and we survived, and this is exactly what it will feel like in the first round of the conference tournament,” Collins said. “The team we’ll play will likely come off of a game before that and will have won and will have some positive momentum, and so, we might have to survive a game like this in order to advance to the second round and be able to play another game.”

Along with their first-ever sweep of the West Texas road trip, the Lady Toppers also gained valuable insights on how they can continue to execute as the season rolls on.

WKU pounded the ball inside offensively, outscoring UTSA 38-28 and UTEP 39-33 in the painted area. On defense, the Lady Toppers forced exactly 23 turnovers in both games and also translated those takeaways to over 20 points in each contest.

“We’re resilient, and we’re tough,” Givens said. “Even though our offense wasn’t there [against UTEP], we focused, we got our minds back on defense, and we came out with the win. You know, we just learned that if your offense isn’t there, you can still win the game. You just got to focus more on defense.”

The Lady Toppers are the only squad in C-USA with two players in the top five in scoring since conference play began. In nine games, Givens is averaging 20.2 points per game (second), and Elgedawy is scoring 20.0 points per contest (tied for third).

Collins said that although Elgedawy is playing well as of late, he expects even more.

“Raneem does a great job of posting up in there and working, and we’re not really great at finding her when she needs the ball,” Collins said. “Sometimes we’re late, sometimes we miss her altogether. And so, we’ve got to continue to work and get better at that, and when we do, that’s going to make us a better basketball team altogether, because then we can play inside-outside more often.”

This week, WKU will return home for its final two-game homestand of C-USA action.

The Lady Toppers will begin their home stretch with a matchup against Rice (18-3, 9-0 C-USA) on Thursday. Rice, the only C-USA squad with an unblemished conference record, received a vote in the AP Top 25 poll a week ago.

WKU will welcome eighth-place North Texas (11-10, 4-5 C-USA) to Bowling Green two days later on Saturday. Junior Anisha George is averaging 10 rebounds per game for the Mean Green in league play, good for third in C-USA. George is also shooting 63 percent from the floor, which is the best field goal percentage among qualified players.

Now more than halfway through its conference slate, WKU will have only five regular-season games remaining after Saturday, including each of its next four on the road.

The Lady Toppers have road rematches with fourth-place Marshall (13-9, 7-2 C-USA) and North Texas on the horizon along with a home-and-away series against second-place Middle Tennessee (17-5, 8-1 C-USA) and an away showcase versus sixth-place Alabama-Birmingham (18-4, 6-3 C-USA).

“I think the schedule for whatever reason has worked out for us the way it’s kind of building and ramping up toward some key matchups down the stretch,” Collins said. “And so, I’m really excited about these matchups. I think it’s going to mean a lot, I think our players have some big opportunities ahead of them … It should be a lot of fun.”

WKU will look to halt Rice’s flight through C-USA Thursday at 6 p.m. in Diddle Arena.