Hilltoppers have found success by cutting down turnovers 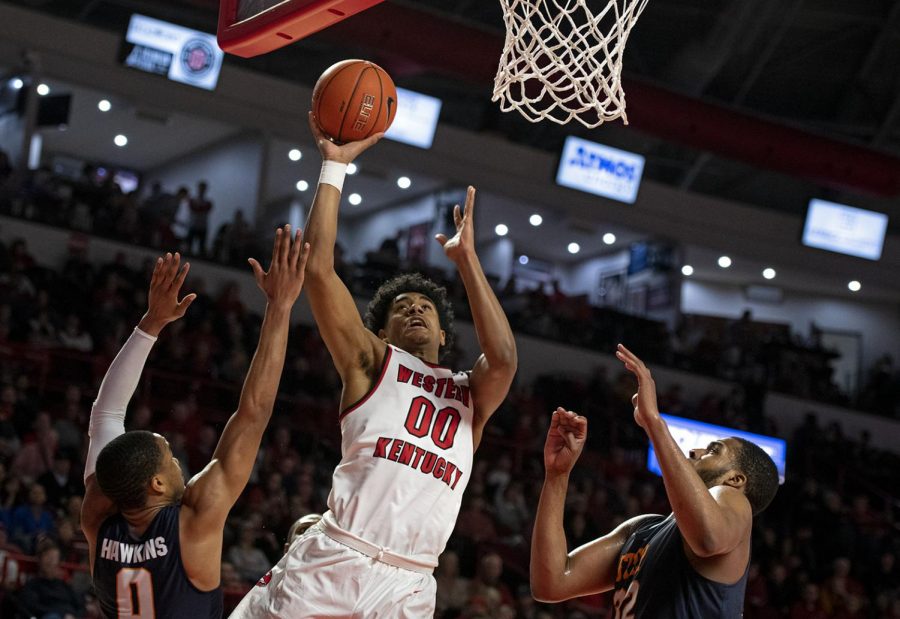 WKU freshman forward Tolu Smith goes up for a shot against two UTEP players during a game at Diddle Arena on Feb. 2, 2019. The Hilltoppers came out on tope beating UTEP with a final score of 76-59.

After struggling for much of the season, the Hilltoppers may have turned a corner on the issue of turning over the basketball. Sixteen giveaways in the season opener turned a nine-point halftime lead into a blowout loss at Washington. WKU also turned it over 16 times in a closer loss to Belmont in December.

The number ramped up during conference play. Coming into their Thursday matchup with Texas-San Antonio, the Hilltoppers averaged 16 turnovers per game in Conference USA play and turned the ball over 15 times in the first half alone in a win over Marshall on Jan. 21.

“That’s been something we’ve struggled with,” WKU head coach Rick Stansbury said. “We haven’t been the most consistent passing team. It’s not one of our strengths. We have to find a way to limit easy baskets off of live-ball turnovers.”

However, last week’s overtime win over UTSA seemed to spark the WKU offense. The Hilltoppers scored 96 points in the victory, which is the highest point total WKU has registered this season. Moreover, WKU only turned the ball over six times and dished out 17 assists in 45 minutes of basketball.

The Hilltoppers followed up the efficient offensive outing with another against Texas-El Paso. WKU shot 52 percent in the second half and turned the ball over just nine times in a 16-point blowout win. After averaging 16 turnovers a game in conference play, WKU limited the total to 15 during the two-game homestand. The Hilltoppers have maintained a 27:15 assist to turnover ratio in the last two games, which is a major improvement from the previous trends.

“We probably haven’t turned it over in transition like we’ve always done,” Stansbury said. “We haven’t done that as much lately. That starts with the point guard play to initiate the offense and create easier plays for your teammates.”

One of the key switches Stansbury made to boost the offensive production was in the starting lineup. Over the last two games, senior Lamonte Bearden took over for freshman Dalano Banton at point guard with solid results.

Bearden has 14 assists to just three turnovers in his two starts and hit the tying free throws against UTSA to send the game to overtime. With the senior guard running the offense, WKU scored on eight of 10 possessions in the final five minutes to pick up a very important home conference win.

After the victory over UTSA, Stansbury called Bearden’s play the key to the win.

“I thought Lamonte was very steady for us,” Stansbury said. “I thought he was a huge key. Seven assists to one turnover. That’s the best we’ve had from him.”

Even with starting, Bearden sees his role as similar to when when he came off the bench.

“Whether I’m starting or coming off the bench, I’m just trying to give the same energy when I come out there,” Bearden said.

WKU will look to keep the ball roll- ing at Rice on Thursday night. Tipoff is scheduled for 8 p.m.