Some students discontent with seating changes in Diddle despite capacity increase 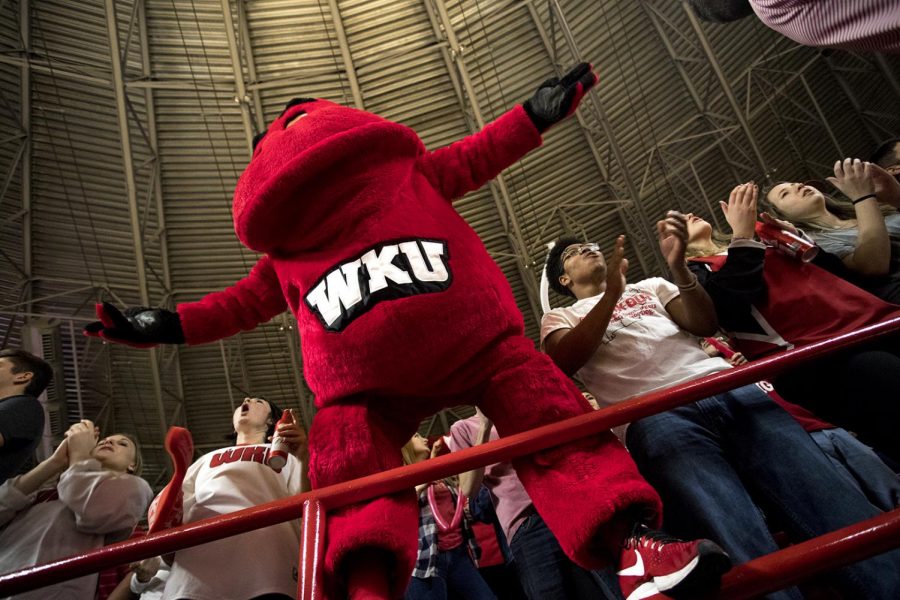 A month before the WKU basketball season started, the school announced the student section would be moved from the baseline to above a rail in the stands. It previously featured a section of seats on the baseline and then extended up above the railing into the upper rows.

Associate Director of Athletic Media Relations Zach Greenwell touted the success of the change in a statement, pointing to the decrease in congestion in the arena as well as the fact the student section didn’t lose seats in the move.

“Our student attendance remains very comparable to last season and a significant increase over 2016-17, and the overall average attendance for men’s basketball in Diddle this season of 5,876 is the highest since Diddle Arena was renovated in 2002,” Greenwell said in an email. “All of that reflects that the changes to the setup have improved traffic flow and congestion issues without impacting our strong, growing fan and student environment in Diddle.”

“Put us back down there, everybody doesn’t like it,” sophomore Will Naylor said. “People used to stand up, and now everybody is sitting down.”

The capacity of Diddle Arena has also been increased to 7,523 seats, an increase of 197 seats, as the previous capacity of the arena was 7,326. the changes also feature premium seating on one baseline, which includes 24 premium seats with courtside amenities, according to WKU.

“The amount of student seating did not decrease through the new setup,” Greenwell said. “We previously averaged approximately 15 students below the rail, and the band previously extended into section 110, which affected 50-plus student seats that are now opened back up.”

Even so, some students said they miss the closeness of the old section.

“When you think of places like Duke and Michigan State, their student sections are literally right on top of the players on the floor,” junior John Alden said. “I think it takes a little bit away from the atmosphere since the students aren’t so close.”

Other students said they were OK with the move and in some cases felt it improved the game day experience.

WKU’s pep band was also affected in the move, going down from the student section to standing space on court level.

“I understand them wanting to make more money and taking that space up for premium seating. A lot of the times, I feel the seats aren’t filled or used as much as they want them to be,” sophomore pep band trumpet player Connor Dhonau said. “But it has kind of taken away from the student section supporting the team, but it also pushed our pep band closer. I’ve gotten used to it. I enjoy being close, but I don’t like how cramped we are.”

The Hilltoppers will be back in action on Saturday at Old Dominion, the first game of Conference USA bonus play. Their next home game will be March 3 against Texas-San Antonio.