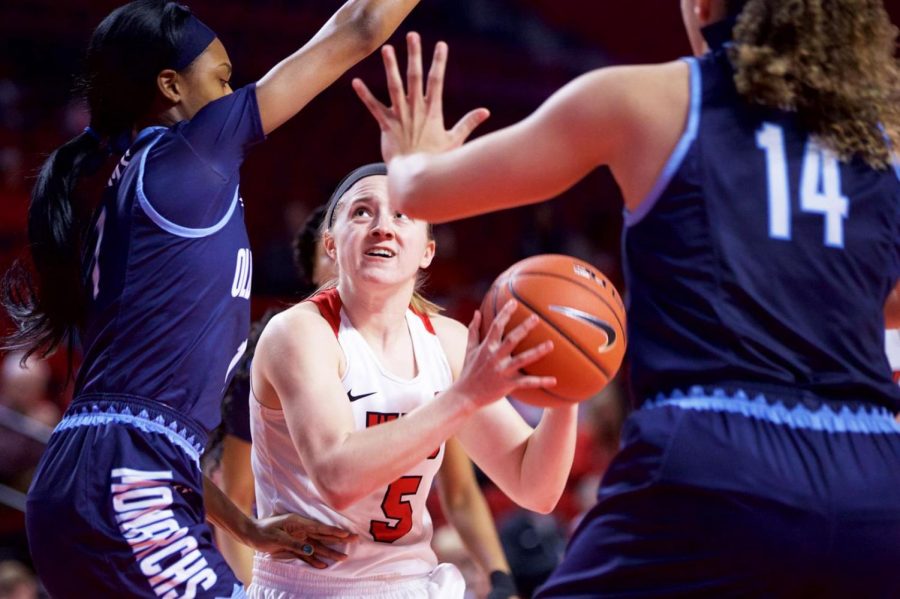 One particularly cold winter day several years ago, residents in the tiny city of Jenkins were snowed in. Jenkins Independent Schools were forced to close, which meant a free day off for most students.

While the rest of the town’s residents were sleeping late and dreaming of how they were going to waste their waking hours away, Whitney Creech was up and texting her head basketball coach Ashley Addington, who knew exactly what those messages meant: her star player wanted extra practice.

“Anytime I wanted to be in the gym, she would open the gym,” Creech said. “I live on a hill, and she had a Jeep. So, I’d walk down my hill, and she’d meet me at the bottom of the hill and take me to the gym—even on a snow day—so I could get in.”

That dedication helped the 5-foot-8-inch guard play in a high school varsity game as a fifth grader.

“I’m always trying to get extra shots up,” Creech said. “You know, working on my shot, so when I shoot it, I’m confident that it’s going to go in.”

“Swish” became a familiar sound for Creech, who led the nation in scoring in each of her final two seasons at Jenkins High School. Creech totaled 5,527 points across her entire prep career, the most ever by a male or female in the Bluegrass State.

That distinction made her a star who turned heads far outside “A City Built on Coal,” a nickname Jenkins acquired for its history with the resource.

Former President Barack Obama wrote her a congratulatory letter, “Ripley’s Believe it or Not!” featured her scoring record in a syndicated comic strip and the Naismith Memorial Basketball Hall of Fame requested one of her game-worn Jenkins jerseys for display.

But once Creech stepped foot onto a college basketball court, everything changed.

“It’s a lot different coming from high school basketball to college basketball,” Creech said. “You know, the game is a lot faster, people are just as tall as you and more athletic.”

Diddle Arena, which averages 1,710 fans during WKU women’s basketball games this year, is a far cry from the venue where Creech played during her prep career. Jenkins’ gym housed about 1,500 people at maximum capacity and did not have automated retracting seats until 2015.

When Creech, wearing her signature black headband, brings the ball up the court for the Lady Toppers, the crowd size is not the only difference.

Collegiate defenders are a lot tougher, which forced Creech to rethink her game. “In high school, I was able to attack the rim and finish and get to the foul line,” Creech said. “I still feel like I can do that at this level. I just had to adjust the way that I score around the rim.”

Creech worked to translate her style of play to Division I basketball, but after nearly three years, she has not made the same impact at WKU as she did in high school. While Creech scored 50 points or more 17 times in just her senior season at Jenkins, after almost three seasons as a Lady Topper, she’s notched double-digit points only 12 times.

No longer a scoring machine, Creech’s tenacity and character, however, have remained intact.

Basketball may have defined her in high school, but in college, her maturity has proven she is far more than a name on a stat sheet.

Addington’s voice fills with pride when she talks about Creech. Addington said she remembers the days when she and her assistant coaches would create highlight videos filled with what they dubbed “the Whitney moves” and then send them out to college coaches, hoping to get Creech recruited.

When Creech decided to sign with WKU, Addington said everyone, including her star player, knew the scoring numbers would dip. But Creech had “absolutely no problem” with trading her points for a Division I basketball scholarship, because she was a team player at heart.

As much as basketball had defined her since she was a child, Creech said she knew who she was off the court and in life. She had enough inner confidence to value winning over self-promotion.

That attitude has not been lost on Addington, who watched Creech grow for seven seasons.

“She’d do anything she can,” Addington said. “Just as long as it’s for the team to get the win, she doesn’t care. If it’s being the biggest cheerleader on the bench and it helps the team, she’d do it.”

“Whit is a competitor first and foremost, and she’s a team player,” Collins said. “The best thing about Whit isn’t that she can score, it’s that she’ll do whatever the team needs to win.”

Everything seemed to be going right early in Creech’s sophomore year at WKU, as the first-year starter tallied a career-high 25 points on the road at Indiana in the fourth game of the season.

It seemed like the Lady Toppers needed Creech to score points just as she had done at such a high clip at Jenkins. But after an early-season road trip to Atlanta, Collins sat down with Creech in the women’s basketball offices and told her that was not going to be the case.

Collins informed Creech that although she was fully capable of scoring, the team needed its starting point guard to get assists and distribute the ball effectively. Collins assured her the transition would not make her less of a player. In fact, she would become even better.

If it was a downgrade or demotion, Creech did not take it that way. She knew deep down it wouldn’t make her less, she said.

“He really helped me learn that it’s not all about scoring—that there’s other ways you can make your impact on the game,” Creech said.

By accepting the challenge, Creech said she learned a lesson. Not about basketball. About life. She would not be defined by her successes but rather by her adaptability.

ESPN rated Creech a three-star prospect in the class of 2016. While many players of her caliber would have transferred after being asked to take on a new role, Creech chose to stay.

“But Coach Collins and Coach Heard, at the time, were there. They always believed in me, and they thought I could play at this level and be successful.”

And Creech has been. Except now the glowing statistic is her assist-to-turnover ratio, not points.

Through 28 games this season, Creech has dished out 82 assists and given up only 37 turnovers. Her 2.2 assist-to-turnover ratio ranks second among all qualified players in Conference USA.

Creech has 26 more assists than anyone else on WKU’s roster. Her 37 turnovers are also the lowest by any Lady Topper who averages at least 20 minutes per contest.

As Creech shifts the defense and sets up shots for her teammates, her feet move confidently inside a black and white pair of Nike Zoom LeBron Soldier XII TB basketball shoes. They are more than just a stylistic choice. They are part of her motivation.

“I love socks, and I love to match,” Creech said. “Last year, me and coach Collins had a little bet. He said, ‘You have to wear mismatched socks if you have more turnovers than assists.’ So, ever since last year, I always look at assists.”

That is the competitive instinct Collins hopes her teammates will emulate. When Creech’s time at WKU is done, she may not be a scoring leader. But she will emerge as a leader nonetheless.

Creech, whom Collins described as a “workhorse,” has not lost the spirit that urged her to get out of bed on a snow day and beg to be let inside a tiny gym years ago. The same spirit that created an opportunity and took her far from home and far in life.

Creech said she knows outsiders likely expected her to continue scoring in college. Some may even remember her outrageous statistics and think she has failed. But as Creech plans for life after basketball, she said she views her college career much differently.

“I think, for me, that’s kind of helped me grow as a person and as a player, because once I’ve got here, I’ve learned that scoring doesn’t necessarily mean that you played a good game.”

Creech smiled and continued: “You could have a great game and have zero points.”

Sports reporter Drake Kizer can be reached at 270-745-2653 and [email protected] Follow him on Twitter at @drakekizer_.