Lady Toppers dig out win on the road against UTEP 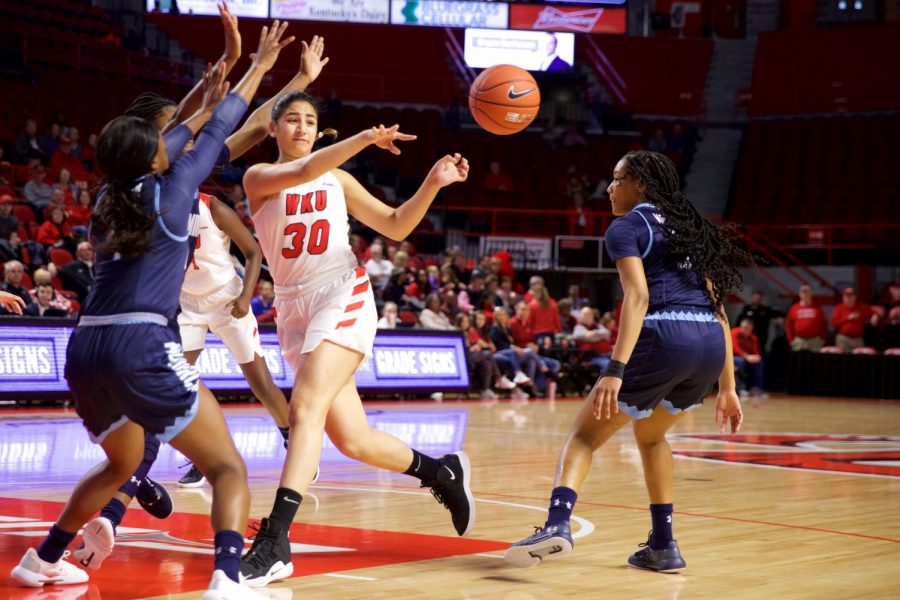 The WKU women’s basketball team led by as much as 10 and trailed by as much as 12 at Texas-El Paso on Saturday afternoon, but the Lady Toppers were able to find a way to start off February with their eighth victory of the year in Conference USA play.

“We’ll learn,” head coach Greg Collins said on the postgame radio show. “I told them, the main thing is you’re not going to play great every night and so sometimes you’ve got to find a way to win some ugly games. We didn’t play well tonight, but we found a way to survive this one and move on and we can sit down and watch this film and learn from our mistakes on defense and hopefully improve those as we get ready to play Rice.”

For the second time in as many games, the Lady Toppers were led by sophomore forward Raneem Elgedawy and redshirt junior forward Dee Givens.

Junior guard Whitney Creech helped WKU begin the game on a 6-0 run, translating two early takeaways into coast-to-coast layups for WKU. UTEP got two shots at the foul line, but the Lady Toppers answered with yet another 6-0 run. WKU’s advantage ballooned to double digits after Givens nailed a jumper at the 4:56 mark, 12-2.

From there, the Lady Toppers were completely derailed on both ends of the floor.

WKU did not register a single point for the last 4:56 of the first quarter. UTEP was held scoreless for over two minutes during that same stretch, but the Lady Toppers could not capitalize. The Miners were able to enjoy a 10-0 run to conclude the opening period.

UTEP and the Lady Toppers were knotted after 10 minutes of action, 12-12.

Both teams traded buckets and the lead in the early moments of the second period. A Givens 3-pointer gave WKU a 17-16 lead, but the Miners quickly answered with a 13-0 run. After that outburst, the Lady Toppers trailed UTEP by 12 at the 3:45 mark, 29-17.

The Lady Toppers did not get overwhelmed, staying within striking distance thanks to buckets from Elgedawy and Givens. Givens nailed a pair of 3-pointers in the last 2:55 of the frame, but the Miners were able to maintain their six-point advantage over WKU.

UTEP opened the third quarter with a layup, extending its lead to eight points. Elgedawy erased most of that advantage all by her lonesome, nailing three consecutive shots before Givens tied the game at 38-38 with a fastbreak jumper. WKU held the Miners scoreless for over three minutes, but UTEP regained the lead on a made free throw.

Junior forward Zuzanna Puc drilled a 3-pointer at the 4:24 mark, giving UTEP a 43-39 lead over the Lady Toppers. Following Puc’s make, neither team scored for nearly three minutes of clock time. UTEP finally broke the drought, netting a jumper to take a six-point lead once again. The Miners carried that lead into the final period, 47-41.

“Basically, we’re still in the game,” Givens said. “You know, we were only down six, it’s not like we were down 16. Don’t panic, just keep playing the way we were playing and eventually good things would happen.”

Elgedawy helped trim the Lady Toppers’ deficit to only one by scoring six points in the early minutes of the frame. Freshman guard Meral Abdelgawad grabbed a steal and then drilled an and-one layup, giving WKU the lead in the process, 50-49.

The game quickly devolved into a free-throw shooting contest, with both teams being forced to make shots from the charity stripe. A late miss by Givens at the foul line seemed to seal a UTEP victory, but Givens was fouled grabbing the rebound.

Elgedawy answered the call, nailing a jumper for the lead. Givens sank two final foul shots and put the game on ice, allowing WKU to go home with a three-point win.

Following the win, the Lady Toppers will be off until a two-game home stretch begins next Thursday. WKU will host Rice (18-3, 9-0 C-USA) and North Texas (11-10, 4-5 C-USA), the first and eighth-place teams in C-USA, respectively. The Lady Toppers will look to hand the Owls their first loss in conference play Feb. 7 at 6 p.m. in Diddle Arena.