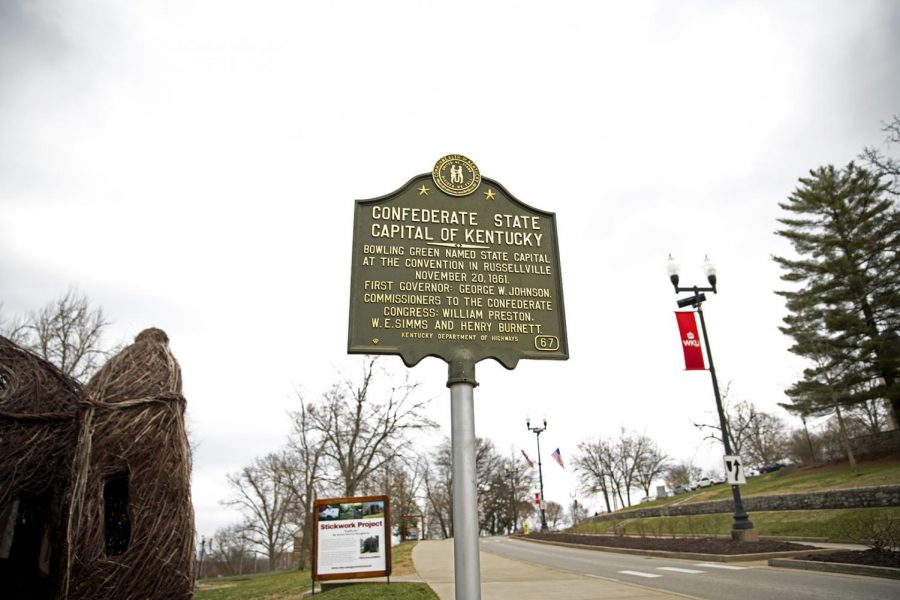 A marker designating Bowling Green as the Confederate capital of Kentucky during the Civil War was recently reinstalled near the Kentucky Museum. Now, WKU students want it removed.

Student Government Association senators Conner Hounshell, Symone Whalin and Kara Lowry are authoring a resolution to remove the marker. In an email, Hounshell said he saw a Facebook post from an African-American community member who expressed concern over the reinstallation of the marker.

“I was not aware of there being such a sign on campus and saw it as problematic,” Hounshell said.

From there, Hounshell said he met with other members of SGA and determined as an organization to represent all students on campus, asking WKU to remove it.

The resolution states the marker stands as a reminder of the racially intolerant past of Bowling Green and WKU and must be taken down so that show its “commitment to inclusivity.”

Through the resolution, Hounshell said he hopes it will inspire continual change on campus. He said he believes the campus and community have a poor history of racism and cited incidents of racial harassment and university racial equality.

“So, the first step, and the least we can do, is to stop glorifying our racist past,” Hounshell said. “Hopefully then we will take comprehensive steps to address the institutional problem of racism and provide reparations for minority students on campus.”

WKU Director of Media Relations Bob Skipper said the marker was removed and stored for 18 months during construction of Hilltopper Hall. He said it was removed to avoid any damage.

According to an article by the Bowling Green Daily News, the marker was reinstalled in front of the Kentucky Museum.

While some students believe the marker needs to be removed, others said they feel differently.

“I don’t care,” sophomore Kayla Olson said. “I just think it’s not worth the controversy.”

Junior Nolan Johnson said he believes the marker represents history that cannot be taken away from WKU.

“People get worked up over nothing,” Johnson said.

Kentucky is often regarded by historians to have been a “border state” during the Civil War, meaning it remained largely neutral throughout the conflict and never seceded from the U.S. However, Kentuckians loyal to the South set up a rogue government aligned with the Confederate cause. The seat of this government was located in Bowling Green.

The resolution will be discussed at Tuesday’s SGA meeting, according to the agenda.