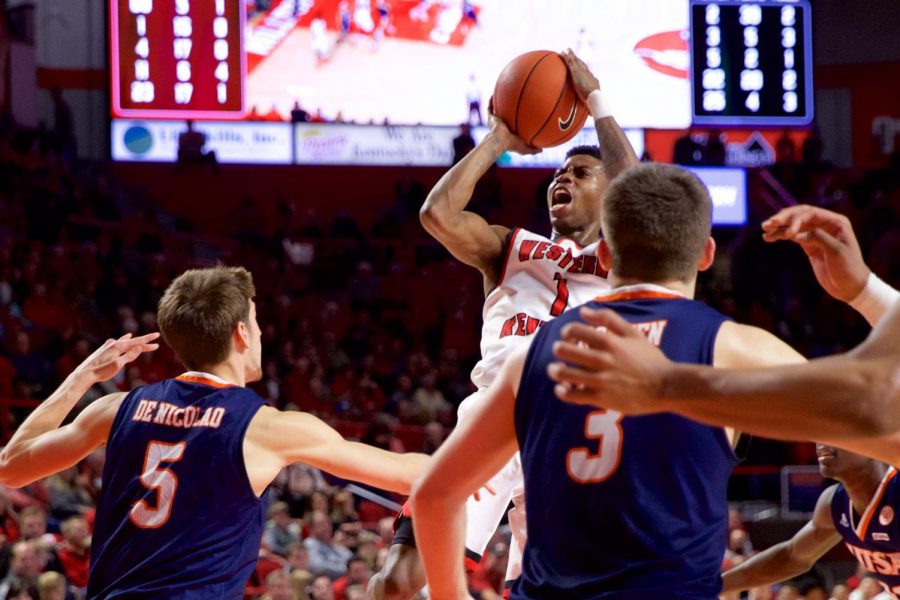 WKU's Lamonte Bearden delivers a fade away jumper at the top of the key against Texas-San Antonio in Diddle Arena on Jan. 31. HERALD/ Joseph Barkoff

The WKU men’s basketball prevailed in a thriller over the Texas-San Antonio by a score of 96-88 to  improve to 5-4 in Conference USA play. The Roadrunners dropped to 6-3 in conference play.

Even making his first start of the season, Bearden saw his role as similar to when he came off the bench.

“Regardless whether I’m starting or coming off the bench, I’m just trying to give the same energy when I come out there,” Bearden said.

“That’s probably one of the best individual performances I’ve witnessed in a long time,” Stansbury said. “It didn’t matter what we did, how we guarded him, he made off the catch, made shots off the bounce, and made shots off the dribble, left and right.”

The Hilltoppers got off to a hot start back in Diddle Arena. WKU opened up with seven unanswered points to begin the game.

UTSA would respond with a 7-2 run to draw within two points at the first media timeout.

After the Roadrunners tied the game, WKU answered with back to back buckets from Anderson and Bearden.

Back to back Jhivvan Jackson gave UTSA its first lead of the game at 20-15 and forced a WKU timeout with 12:35 left in the first half.

Anderson knocked in a 3-pointer, but Jackson answered with a layup and a jumped to give the Roadrunners their biggest lead of the game.

Wallace continued the 3-point barrage with one of his own to extend to Roadrunner lead to eight. Bearden and Anderson responded with back to back 3-pointers to bring the Hilltoppers within four at the third media timeout of the half.

WKU managed to tied the game at 37 with under two minutes left in the half thanks to a Hollingsworth layup and forced the first Roadrunner timeout.

An 8-0 run gave the Hilltoppers back the lead after jumpers from Bassey and Hollingsworth.

The high scoring half ended with the Hilltoppers on top 41-39.

Jackson was red hot in the first half, leading all scorers with 17 points. Wallace was not far behind with 14 of his own.

With the score tied at 47, Hollingsworth was called for a flagrant one foul. Jackson cashed in with two free throws and another 3-pointer.

Hollingsworth picked up his fourth foul with 15:15 left in the half. WKU trailed 52-47.

Bassey began to take over with Hollingsworth in foul trouble. His layup gave the Hilltoppers a two point lead amidst a 6-0 run.

Jackson responded for the Roadrunners. A jumper and a four point play put UTSA back in front by five.

After a Bearden layup cut the lead to two, Jackson continued his trend and hit another big 3-pointer. The Roadrunners led 61-56 with 10:57 left.

WKU attempted to throw a double team at Jackson to no avail. The sophomore guard banked in from three to extend the lead to eight.

WKU again cut the lead to four, but a Wallace 3-pointer put the Roadrunners back up by seven.

Jake Ohmer got in on the shooting party with a 3-pointer of his own. The Hilltoppers were within four with under eight minutes left.

Anderson knocked in a 3-pointer to bring the Hilltoppers within a point.

Tolu Smith gave the Hilltoppers the lead with a layup and forced another UTSA timeout to stop the 8-0 run. WKU was in front 68-67 with 5:23.

Wallace snapped the WKU run out of the timeout with a 3-pointer gave the Roadrunners the lead again.

WKU found itself trailing by a point at the final media timeout.

Bearden converted an and-1 to tie the game at 72.

A pair of Charles Bassey free throws gave the Hilltoppers a three point lead. Jackson answered on the other end with a bucket and a foul to get UTSA back out in front.

Giovanni De Nicolao piled it on with a 3-pointer to put the Roadrunners up four with only 1:25 left.

WKU struggled to find its offense late in the game. It went 1 of its last 8 and were scoreless in over three minutes with 25 seconds left.

Hollingsworth threw down a dunk with 15 seconds left to bring the Hilltoppers within a point.

After getting a steal, Bearden knocked in a free throw to tie the game at 78 with eight seconds left. UTSA could not score and the game went into overtime.

Savage got the overtime scoring started with a 3-pointer and later continued his hot shooting with another 3-pointer to put WKU up four.

Savage struggled prior to overtime, but he did not let it affect him in the final five minutes.

“I just had to put all of that behind me,” Savage said. “Overtime was a new game to me, so I just came out and hit that one and got hot.”

A pair of Anderson free throw put WKU up six, but Wallace hit another 3-pointer to get UTSA within three.

Jared Savage banked in a 3-pointer to extend the WKU lead. Anderson got a clutch offensive rebound the following possession to force a UTSA foul.

WKU would close out the game for its fifth conference win.

Next up, WKU takes on the Texas-El Paso Miners on Saturday night. Tip-off is scheduled for 6:00 p.m.