Hilltoppers look to move up in standings at UAB 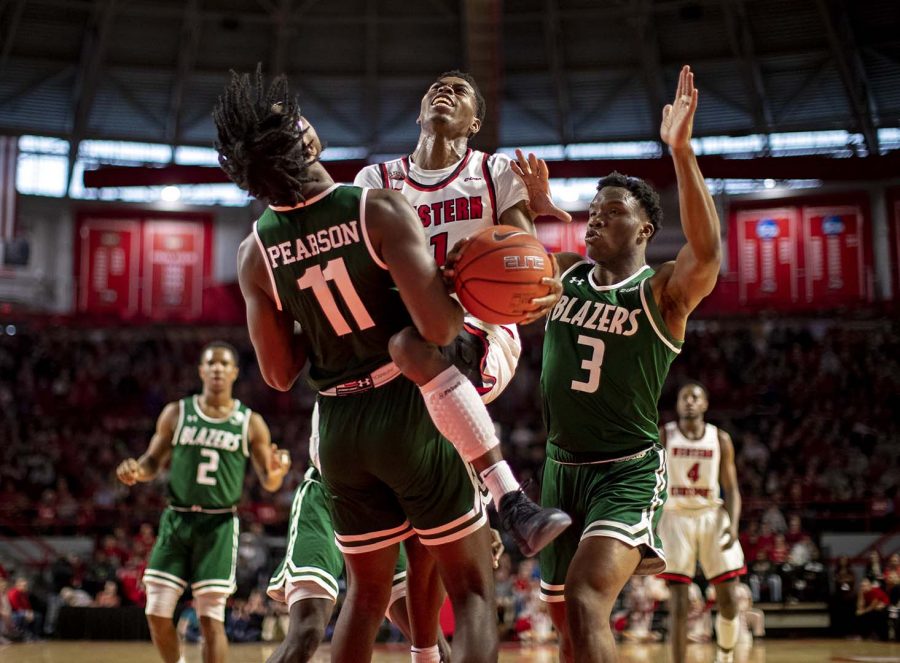 Hilltopper guard Lamonte Bearden earns a charge driving through the lane on Feb. 16 at E.A. Diddle Arena. Bearden scored 7 in the 68-60 loss.

Head coach Rick Stansbury said his team had chances to win at Old Dominion, but could not get it done.

“Give them credit,” Stansbury said in Wednesday’s press conference. “But it’s very apparent we had our opportunities to close out that game again and we didn’t close it out.”

The Blazers are on a hot streak heading into Thursday’s matchup. UAB has won three straight road games against Marshall, WKU, and Southern Mississippi.

The latest win came in overtime as the Blazers outlasted the Golden Eagles, 76-72.

Sophomore guard Zack Bryant leads the team in scoring at 14.6 points per game and assists per game at 4.1.

Senior forward Lewis Sullivan scores 11.5 per game and grabs a team-leading 6.8 rebounds per game. Sullivan also leads the team in 3-point percentage at 40.4.

Sophomore guard Taveion Hollingsworth said that effort is the key to getting the Hilltoppers back on track.

“We’ve got to give it our all,” Hollingsworth said on Wednesday. “Like we’ve been saying, we just got to play hard. When we play hard, big things happen.”

The Hilltoppers and Blazers squared off just two games ago in Diddle Arena. UAB got the better of WKU in the contest, winning 68-60.

Freshman center Charles Bassey lead the way for the Hilltoppers with another double-double, scoring 23 points and grabbing 10 rebounds. Sophomore guard Josh Anderson was the only other Hilltopper in double figures with 15 points.

Bryant dominated on offense for the Blazers, scoring 24 points for the Blazers on 8-of-15 shooting from the floor.Bowling Green native Tavin Lovan recorded his first double-double of the season with 13 points and 12 rebounds. Sullivan added 10 points and seven rebounds as well.

Currently fifth in the C-USA standings, WKU can jump back up to second or third potentially with a win at UAB. A loss will cement them in last place of the grouping.

Stansbury is well aware of the threat Bryant presents to the Hilltoppers on Thursday night.

“He can’t get 24 points and us win,” Stansbury said. “You gotta keep him out of that lane. Easier said than done, but you gotta do it.”