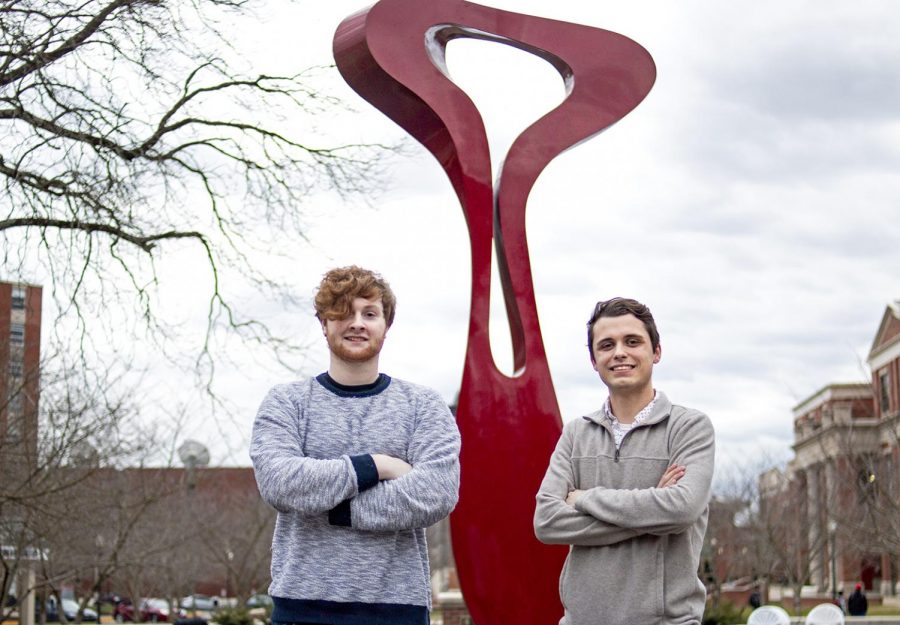 Liam Seymour (left) and Jacob Haskamp (right) invented their company under the name BioTek Inc that seeks to solve problems and innovations in the wearable space. "I came up with the idea 8 months ago and brought Liam on this idea 3 months ago," Haskamp said. "Competition-wise there is nobody with the same technology we have." Jacob Haskamp is majoring in computer science and in the process of changing to entrepreneurship and Liam Seymour is majoring in computer science.

Two young men in Bowling Green have been making advances in the technology and business worlds alike. Sophomore Jacob Haskamp and Liam Seymour, a 21-year-old who is taking a gap year, have created a new wearable technology to make people more comfortable.

Haskamp and Seymour created their company, BioTek, Inc., this past year and are launching their first product, AirBox, on Kickstarter this March.

BioTek is already receiving some funding from Riverside Technologies, but using Kickstarter will help it complete funding and gather information on the demographic best suited for its product.

The AirBox, which is not much bigger than an index card, “functions by cooling and heating air (based on your preference) and pumping it through the wearer’s clothing,” a BioTek press release stated.

The initial idea for the product came when Haskamp was cleaning his grandmother’s attic. He said he remembered thinking, “Man, it would be nice if I had a jacket that would cool me.”

Haskamp said he forgot about the idea until he rediscovered it in an old journal. Not long after, he met Seymour, his future business partner and friend.

Seymour was working at the WKU Makerspace when Haskamp came in seeking someone who could help him make brakes for his skateboard. Seymour was in charge of the 3D printing machine that would help create Haskamp’s blocks, as well as BioTek’s AirBox.

“There’s a shorter list of what he can’t do,” Anne Heintzman, a WKU instructor, said. She said she’s watched Haskamp and Seymour’s journey since it began last year and remembers how she met Seymour two and a half years ago.

Heintzman hired Seymour to work at the MakerSpace, and she said he cheerfully works there despite it not paying much. Seymour fixes machines and teaches others how to do the same.

Heintzman met Haskamp the same way Seymour did, when he came into the MakerSpace looking for a 3D printer to fix his skateboard.

“He just likes to create things,” Heintzman said of Seymour.

She said Seymour has learned and grown extensively since she first met him, and she believes he is “thinking far beyond himself.”

The two entrepreneurs said they believe the notion that college guarantees success is outdated.

“As two young entrepreneurs, we’ve overcome a lot,” Haskamp said. Skeptics might argue personal-sized heating and cooling units is not a necessity, but Haskamp argues otherwise. He said people consider heat and air units in their homes to be neces- sities, so having one for your clothing should be viewed similarly.

“It’s a modern necessity,” Haskamp said. Haskamp is the CEO for BioTek.

He mainly handles the marketing and business-minded front, and Seymour handles more behind-the-scenes and technological aspects.

“It’s a good dynamic,” Seymour said. “He’s seen enough of my driving to start giving backseat directions.” Heintzman has known the two since the beginning of their process and hopes to continue sharing her support. “I’ve been on the fringes,” Heintzman said. “I don’t ask what they’re up to. I ask how I can help.”

Once they collect data on who would be interested in buying the AirBox, they will begin to market more toward specific demographics. Sales will begin online but eventually move to in-store retail if things go as planned, Haskamp said.

“I don’t think there is any limit of where they can go,” Heintzman said.

Editor’s note: A previous version of this story incorrectly identified Seymour and Haskamp. The Herald regrets this error.