Hilltoppers down Marshall in second half to even conference record 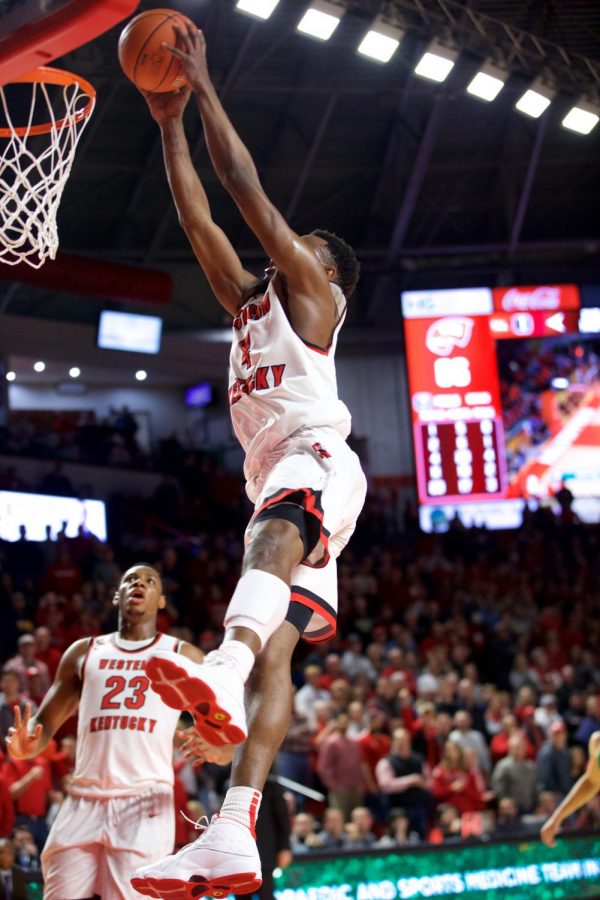 Sophomore guard Josh Anderson dunks the ball while freshman center Charles Bassey looks on in the closing minutes of WKU's 68-59 victory over Marshall in Diddle Arena on Monday.

After a rocky start, WKU managed to take down the rival Marshall Thundering Herd 68-59 on Monday night.

Sophomore guard Josh Anderson led the way for the Hilltoppers with a career-high 25 points and five steals. Freshman center Charles Bassey recorded another double-double with 17 points and 17 rebounds.

Bassey saw an opportunity to attack Marshall’s smaller front court in the paint.

Marshall guard Jon Elmore led the Thundering Herd in scoring with 17 points. C.J. Burks was the other Marshall player with double digit points with 13.

Head coach Rick Stansbury was pleased with his team’s performance down the stretch.

“I thought we played with poise.” Stansbury said. “We didn’t turn that ball over much in the final 16 minutes. That’s a huge stat.”

Neither team had a fast start with WKU turning it over back to back possessions and Marshall missing its first three shots.

At the first media timeout, the Hilltoppers clung to a 5-4 lead. Sophomore guard Josh Anderson knocked in a 3-pointer before guard C.J. Burks scored the Thundering Herd’s first four points.

The Hilltoppers struggling to gain a rhythm on offense early with six turnovers to just two assists in the first six minutes.

The Thundering Herd secured their first lead of the game at the 12 minute mark with a 10-8 advantage. WKU continued to struggle with turnovers and made only three of nine shots early on.

Freshman center Charles Bassey extended the WKU lead with a bucket in the paint at the eight minute mark of the first half.

The game stayed ugly heading into the final media timeout. The teams combined for 22 first half turnovers sub-30 percent shooting.

Marshall finally managed to get some shots to go down. The Thundering Herd hit their final three 3-pointer heading into halftime. Marshall led 25-24 at intermission.

Both teams combined for 25 turnovers to just eight assists in the first half. Neither team shot the ball well, with both under 40 percent from the field.

Elmore found his stroke to begin the second half as he hit his first couple attempts from behind the arc to give Marshall a five point lead.

Guard Jannson Williams forced a WKU timeout with a 3-pointer of his own. Marshall extended its lead to eight with 17:31 left in the game.

The Thundering Herd clung to a four point lead at the 12 minute mark. WKU upped its turnover total to 19 with 11:49 left.

Sophomore guard Jake Ohmer hit the Hilltoppers first 3-pointer of the half and brought WKU within three at the third media timeout of the half.

Anderson tied the game at 46 with his second 3-pointer of the game. The Thundering Herd responded the next possession when guard Jarrod West hit a three of his own.

After Marshall took a seven point lead, the Hilltoppers went on a run of their own, holding a 54-53 advantage with under four minutes left. Anderson led the surge with a dunk and layup.

WKU extended its run to 13-0 which put the Hilltoppers up 60-53. Both Bassey and Anderson did their damage from the free throw line.

Anderson put the exclamation point on the Hilltoppers comeback with a massive slam to end it.

The Hilltoppers finished the game on a 22-6 run to close out their third conference win.

With the sting of the recent three game losing streak fresh on their mind, Anderson said the team focused in order to avoid the same result again.

“The past couple games, we got a lead and let them come back,” Anderson said. “Our main focus was not letting that happen again.”

The Hilltoppers will look to extend the win streak to three on Thursday night at Southern Mississippi.