Hilltoppers will try to keep momentum on the road 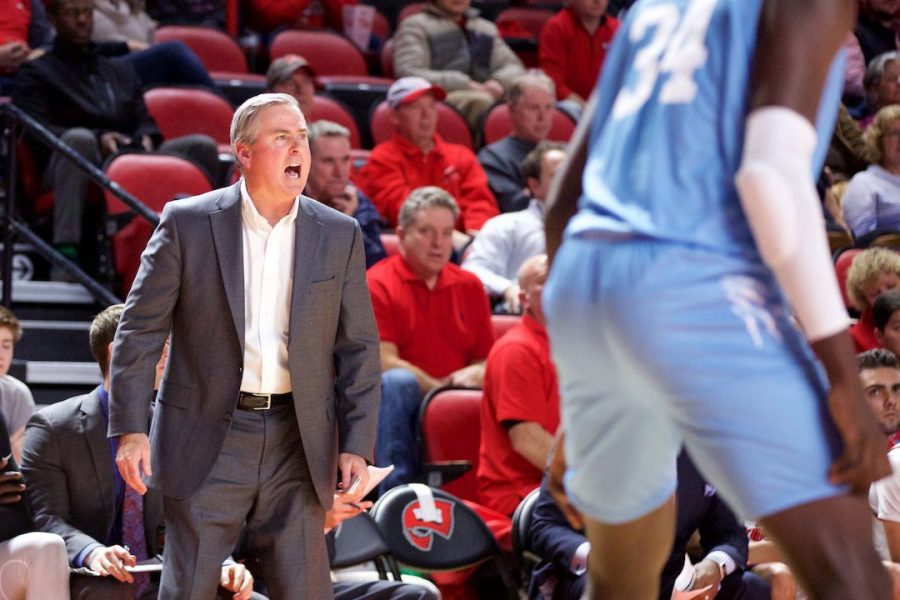 Rick Stansbury gives direction to his team during WKU's game against Florida International on Thusday. The Hilltoppers lost 77-76.

The WKU basketball team takes its two game winning streak on the road to take on Southern Mississippi on Thursday.

The Hilltoppers improved to 3-3 in conference play with Monday night’s 68-59 win against Marshall. WKU has turned around its play after suffering three straight losses while leading by at least 15 points in each game.

Head coach Rick Stansbury acknowledged the game will be a major challenge for the young Hilltopper squad.

“We’re going to a really good Southern Miss team that’s playing much better,” Stansbury said. “They have some good wins this year. I haven’t studied them yet, but I know their three best players back from last year.”

Sophomore guard Taveion Hollingsworth currently leads the Hilltoppers in scoring with 15.8 points per guard. Freshman center Charles Bassey is close to averaging a double double with 14.2 points and 9.4 rebounds a game. Sophomore wing Josh Anderson is coming off a his best game of the season against Marshall with a new career high in points, with 25, and steals, with five.

WKU’s defense turned up the heat against Marshall, holding the Thundering Herd to a season-low 59 points on just 35 percent shooting.

Bassey said on Monday that he believes that the win over C-USA leader Marshall shows that the Hilltoppers will not back down to any opposition.

“It sends a good message that we’re working on our game and getting better as a team,” Bassey said. “We play good defense and we play hard every time. Regardless of the turnovers, we played good defense and came out with the win. We need to do that every time out.”

The Southern Mississippi Golden Eagles come into Thursday night’s showdown with an 11-8 overall record and a 3-4 record in Conference-USA play. Southern Miss had a three game winning streak snapped at Old Dominion on Saturday. The Golden Eagles have only lost one game at home this season, coming on Nov. 25 against William Carey.

The Golden Eagles have two players averaging double digit points per game. Cortez Edwards leads the way with 13.5 a game to go along with 6.4 boards per game. Tyree Griffin averages 13.1 points per game and leads Southern Miss in assists a game with 6.8.

Last season, these teams faced off only one time, with the solo meeting occurring in Diddle Arena on Dec. 30, 2017. The Hilltoppers won this matchup 82-66 behind 20 points and seven rebounds from Senior center Dwight Coleby. Hollingsworth scored 12 points in the victory as well. Tyree Griffin scored 14 points and dished out six assists in the defeat.

Although WKU enters Thursday’s contest with a 2-6 road record, Stansbury said that he has liked his team’s play away from Diddle Arena.

“We’ve played good on the road,” Stansbury said. “We were good all three of those conference games on the road. Didn’t finish two of them, but we played good for 30-35 minutes.”

The next challenge for Stansbury and company will be to tighten up their play during crunch time on the road.

“We got to find ways now to finish that game,” Stansbury said. “Those one possession games, we got to be good enough and tough enough. Tough enough defensively to get those stops.”

Tip off is set for 7:00 p.m. Thursday night at Reed Green Coliseum.