Turnovers lead to offensive inconsistency for Hilltoppers in conference play 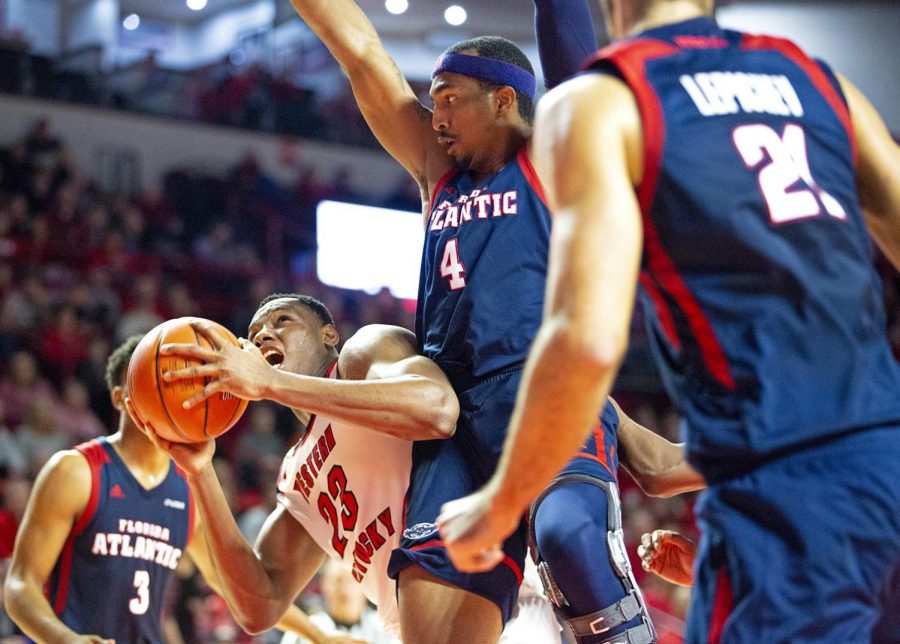 The WKU men’s basketball team has had its fair share of issues leading up to and during the 2018-2019 season. Suspensions, arrests and the departure of graduate transfer senior Desean Murray have been a constant source of distraction off the court.

On the court, issues at point guard and the inability to protect a big lead have cost WKU multiple games. Now, with conference play well underway, the Hilltoppers have a glaring problem: They can’t score, in part caused by inconsistency.

“We’ve had all the games under control for the most part,” WKU head coach Rick Stansbury said after the team’s recent win against Southern Mississippi. “Had big leads in them. Couldn’t hang on and finish them.”

The WKU offense has become completely inept in one of the more important stretches of the regular season. Even worse, the offense became the most stagnant in the most crucial points in the games.

According to KenPom statistics, the Hilltoppers rank just 181st in adjusted offensive efficiency. Since the beginning of conference play, WKU has managed 70 or more points just twice in eight games.

The Hilltoppers had scored 70 or more points in each of the seven non-conference games leading up to conference play, including 83 points against the then-15th-ranked Wisconsin Badgers. WKU has hit 10 or more 3-pointers just once in conference play and shot 40 percent or higher from deep just twice in that span as well.

The Hilltoppers have turned the ball over 125 times in conference play, good for almost 16 giveaways a game compared to just 11 assists a game. Saturday’s loss at Louisiana Tech is the latest example of the Hilltoppers’ inability to put the ball in the bucket. WKU took a 28-21 lead into halftime and were playing with confidence on the road.

The Hilltoppers shot a respectable 47 percent from the floor and 40 percent from deep. The second half was a completely different story.

The Bulldogs blitzed WKU with a 22-4 run to take a lead they would not give back. WKU scored just two points in the final five minutes in a 62-50 defeat.

“Just didn’t play with the same confidence that we played with the first 20 minutes,” Stansbury said after the loss. “Hard to imagine how we can turn the switch on sometimes then flip it right back off again.”

The defensive end has a lot to do with the lackluster offense. Stansbury said that when opponents get hot on the offensive end and make a run, it rattles the young WKU squad.

“When someone makes a run at us, it speeds us up,” Stansbury said. “We take too many quick shots. We try to do things one on one. Most times it ends up being bad.”

The bad offense puts stress on the defense as well. Poor shot selection leads to easy buckets for the opponents, Stansbury said.

“Quick and bad shots ended up leading to transition stuff for them,” Stansbury said.

Even in the wins, the Hilltoppers have been turning it over an astronomical amount, including 21 times in a win over Marshall. Even with Bearden back in the rotation after missing the first nine games due to suspension, quality ball handling and passing has been hard to come by for the Hilltoppers. Stansbury is not pleased with the ball movement in his offense.

“The ball didn’t move at all,” Stansbury said after Saturday’s loss. “Again, when people make runs at us, we try too much individually break off and do things.”

Stansbury’s players believed turnovers are a key factor in the offensive slump as well.

“Turnovers hurt us,” sophomore guard Taveion Hollingsworth said. “We started the half off with two big turnovers and gave them a lot of momentum. When you get a lot of momentum, the rim just gets bigger, and that’s what it looked like.”

WKU will look to break out of its offensive slump at 7 p.m. on Thursday at Diddle Arena against Texas-San Antonio.