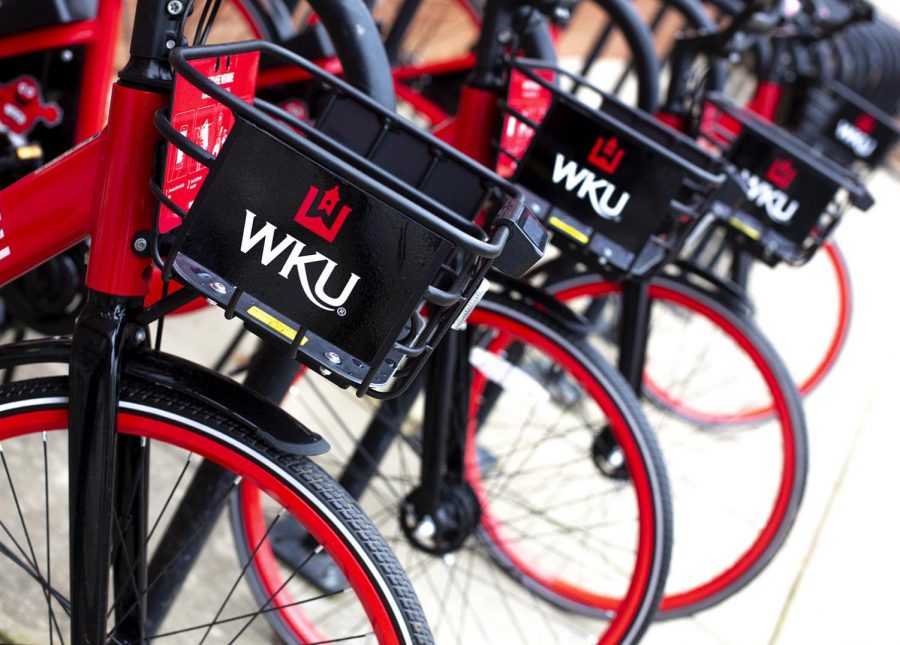 WKU brings VeoRide bikes to campus for students to rent and ride. The rates for the bikes vary depending on minute. According to WKU news, "pay-as-you-go bike rental rates start at 50 cents for 15 minutes." There are also package deals available starting at $6.99 per day.

VeoRide bikes are officially available on WKU’s campus and can be accessed through the company’s app. The bikes, which arrived on campus a week before the end of the fall 2018 semester, are similar to Bird scooters and other ride sharing programs, allowing students to pick up and drop off the bikes at any location. The bikes can be rented for 50 cents per 15 minutes, $17 per month or $70 per year.

A survey taken last fall showed significant interest for a bike-share program on campus. Before the bikes arrived, a committee consisting of students, faculty and staff determined where to place “geofences” for the bikes, according to Brad Wheeler, the assistant vice president of business services for WKU.

Wheeler said he thinks the bikes are doing well on campus since their recent arrival. He claimed they are “moving across campus,” as he has noticed just from in front of his office that students have been utilizing them.

Wheeler said students have quickly gravitated toward the bikes and amassed about 100 rides per day in the first few days they were on campus.

The 175 bikes came in boxes and were constructed in the Preston Center in December. They were then were sent out around campus from there.

Wheeler said the original bike model the university tested only had three speeds, but he decided it wouldn’t suffice going up the Hill.

“I’m glad we went with the seven-speed model,” Wheeler said.

Tanner Whatley, a sophomore from Crestwood, said he appreciates WKU’s effort of trying something new on campus, but he initially had problems with the lock on a bike.

Whatley said the lock wouldn’t lock, and it charged his account for the entire night, and he had to bring the bike up to his dorm room so it would stop tracking and charging him. He was also concerned that someone else would use the bike and accidentally charge his account.

“Luckily I was able to get into contact with them, and I got a refund for the over-charge,” Whatley said. “They were a little confusing with how to deal with the problem, but it was all handled with. All in all the bikes are nice and cheap, good to get around campus, fast without having to wait for a bus but are a hassle to deal with when broken.”

Wheeler said WKU will have more statistics concerning the bikes in the spring and will be able to track bike usage through heat maps by the end of February.

“We want to just see everyone have a good time,” Wheeler said.

Amelia Kolb, a senior from Louisville, said she has used the bikes several times around campus.

“I enjoyed using them, but I’m interested to see how many students on campus will actually utilize them,” Kolb said.

Wheeler said he also wants to see how the bikes are used in the community, whether it’s downtown, around Mellow Mushroom or even on South Campus. He also stressed the importance of helmet safety when utilizing the bikes and hopes city-wide improvements can be made to make roads safer for students and pedestrians.