Lady Toppers roll over Marshall to stay undefeated in C-USA 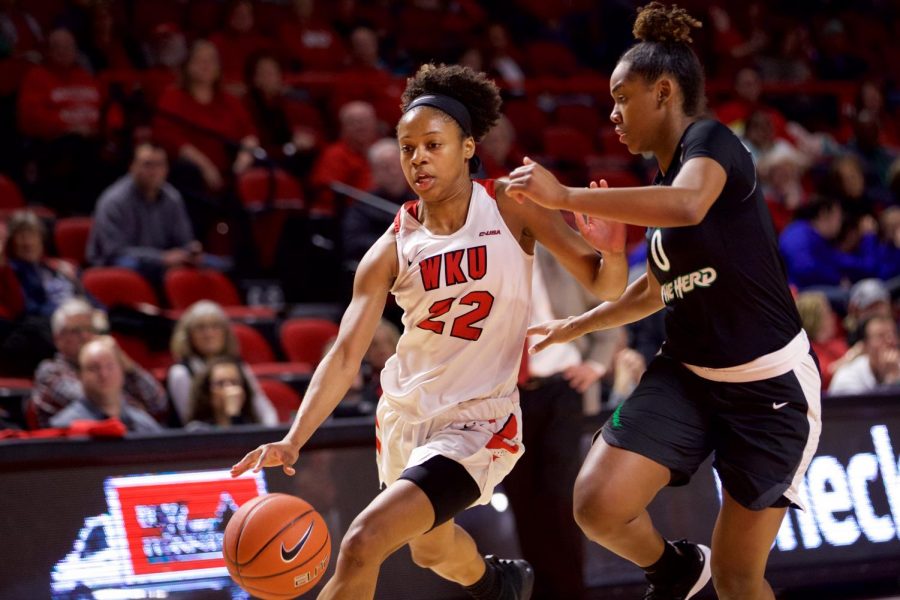 Sophomore guard Sherry Porter battles a defender during the Lady Toppers 85-55 win over Marshall at Diddle Arena on Saturday. Porter finished with a career high 20 points in the victory.

The WKU women’s basketball team left Marshall thunderstruck on Saturday afternoon, improving to 3-0 in Conference USA play and rising to above .500 on the year.

The Lady Toppers (9-8, 3-0 C-USA) snapped Marshall’s three-game win streak by raining 3-pointers, nailing 10 shots from beyond the arc against the Thundering Herd (8-8, 2-1 C-USA) on their way to an 85-55 victory inside Diddle Arena. WKU shot 55 percent from the field, 59 percent from deep and swiped 11 steals.

The Thundering Herd out-rebounded WKU by a narrow 32-31 margin, although the Lady Toppers countered that disadvantage by outscoring Marshall in the paint 42-20 and scoring 30 points off of the Thundering Herd’s 20 turnovers.

“You know, toughness is not being extra physical, tough is not like pushing people around or hitting somebody,” head coach Greg Collins said postgame. “Toughness is just getting up more times than you get knocked down and so the kids are showing that kind of toughness… We’re just going to keep getting back up and keep fighting, and so I think if we keep doing that, this could be a good team by the end of the season.”

WKU was led by sophomore guard Sherry Porter and redshirt junior forward Dee Givens. Porter set a new career-best with 20 points, while Givens notched 20 points of her own and grabbed a team-high six boards for the Lady Toppers.

Givens scored the game’s first points for WKU, nailing a fastbreak layup thanks to an assist from freshman guard Meral Abdelgawad. Marshall answered with a 5-0 run, opening up a 5-2 advantage over the Lady Toppers. The game stayed tight from there, although the Thundering Herd lead WKU by as many as five points after a 6-0 run midway through the period.

Redshirt junior guard Alexis Brewer checked in for WKU with 6:43 left to play in the opening quarter, marking her first game action since Dec. 29. Brewer made an immediate impact in her return, nailing a 3-pointer and a layup during the first frame.

Brewer finished the game with 14 points, two rebounds and two assists in 24 minutes.

Marshall lead the Lady Toppers by one after the first quarter, 17-16.

WKU got going in a big way during the second period, kicking off the frame with a 3-pointer from Givens. Marshall responded with a layup, but the Lady Toppers kept pouring it on from there. WKU went on a 19-2 run during the second quarter, opening up a 38-21 lead and forcing the Thundering Herd to call a timeout with 3:02 remaining.

The Lady Toppers endured a 6-2 run by Marshall late in the second period, maintaining a 40-27 advantage at the halftime break.

WKU came out firing after halftime, as Porter drained a 3-pointer to open the third quarter. Marshall refused to go away quietly, nailing a pair of 3-pointers to trim the Thundering Herd’s deficit to 13 points, 47-34.

The Lady Toppers responded by heating up from beyond the arc, as Givens and Porter nailed 3-pointers on consecutive possessions for WKU. The quick 6-0 spurt extended WKU’s lead back to nearly 20, but Marshall stormed back once again with a 7-0 run of their own. After a late surge lead by Porter, the Lady Toppers lead 61-46 after three.

Porter reached 20 points by converting a 3-point play to open the fourth quarter, eclipsing her previous career-high of 17. Marshall used a 5-0 run to get back to within 13 points, but the Lady Toppers responded with a 9-0 run to get back in front 73-51.

“I think I’m more relaxed my sophomore year rather than my freshman year,” Porter said. “I’m kind of growing into my role in the team and just going out there, having fun and giving my all. I think my biggest role on the team is energy and I bring that every night, every practice, so I think that helps me kind of to relax.”

Marshall still refused to go away, nailing another 3-pointer. WKU was unbothered, continuing to roll offensively and extending its run to 14-3. After a made free throw at the 2:37 mark, the Thundering Herd missed their last seven field goal attempts and failed to register another point for the remainder of the contest.

The Lady Toppers ended the game on a 7-0 run, sinking six of their last seven field goal attempts. WKU outscored Marshall 24-9 in the final frame, floating to a 30-point win.

By claiming victory over the Thundering Herd, WKU extended its program record for consecutive home conference victories. Dating back to Feb. 25, 2016, WKU has won 22 straight C-USA games in Diddle Arena.

Following the win, the Lady Toppers will travel to Florida for their first two C-USA road games. WKU will meet Florida International (3-13, 0-3 C-USA) on Thursday in Miami. The Lady Toppers will then square off against Florida Atlantic (3-13, 0-3 C-USA) on Saturday in Boca Raton. WKU will tip off its road trip against the Panthers Jan. 17 at 10 a.m. in Ocean Bank Convocation Center.