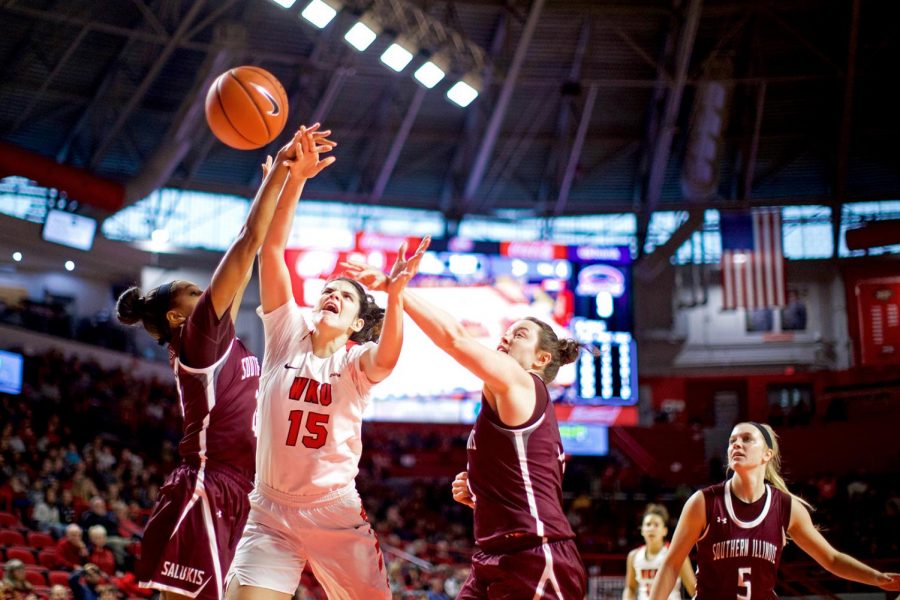 Ladytopper Raneem Elgedawy drives to the net while being fouled by Southern Illinois University's defense at EA Diddle Arena on Nov. 20.

The WKU women’s basketball team struck gold on Thursday evening, kicking off its Conference USA slate with a victory over Charlotte.

“I think it’s very important,” Givens said about beginning league play with a win. “You know, it’s a new season for everybody. . . Everybody starts 0-0, so I think it’s important to start off with that first W and just see if you can keep it going from there.”

“I think the effort has been good, I think tonight was the execution,” head coach Greg Collins said postgame. “I felt like the intensity was good, the effort was good, the communication on the floor was way better than it’s been. They were really talking to each other and fixing problems on the court…I felt like the biggest reason we played better defensively was because we were working together.”

The opening quarter was dominated by Elgedawy and Givens, who registered 16 of WKU’s 20 points in the frame. An Elgedawy layup gave the Lady Toppers a 2-0 lead to begin the contest, an advantage WKU maintained for 18:30 of the contest’s first 20 minutes. Givens also nailed a pair of 3-pointers in the first quarter.

After making five of their last six field goals in the first period, the Lady Toppers concluded the frame with a 20-17 lead. WKU carried its hot shooting into the second quarter, opening the period on a 10-0 run which extended its advantage to 30-17.

The 49ers broke the Lady Toppers’ run with a layup at the 5:55 mark, eventually clawing back to within six points late in the second quarter.

Although both squads concluded the second period by making each of their last three shots from the floor, WKU was able to maintain a 42-32 halftime advantage.

Elgedawy and Givens continued their big nights after the break, guiding WKU to a 9-2 run to open the third period. Charlotte broke its drought with a jumper at the 7:08 mark, trimming its deficit to 51-36.

After a Givens layup at the 6:35 mark, the Lady Toppers did not convert a field goal until 3:30 remaining in the frame. A Givens 3-pointer at that point gave WKU a 58-38 lead.

WKU enjoyed a 10-0 run late in the third period, largely thanks to Charlotte failing to convert a field goal for over five minutes. The 49ers mustered one made free throw and a fast break layup as the frame drew to a close, concluding the third trailing 65-41.

Charlotte did not lay down and give the Lady Toppers anything down the stretch, as they outscored WKU 17-11 in the final period. Despite the 49ers’ best efforts, WKU still cruised to an 18-point victory thanks to five points from freshman guard Meral Abdelgawad in the fourth quarter.

Following the win, the Lady Toppers will host C-USA foe Old Dominion in just two days. The Lady Monarchs (9-4, 0-1 C-USA) are much-improved, as they have already eclipsed the total number of wins from last season’s 8-23 campaign. WKU will seek to extend its 15-8 advantage in the all-time series Saturday at 2 p.m. in Diddle Arena.