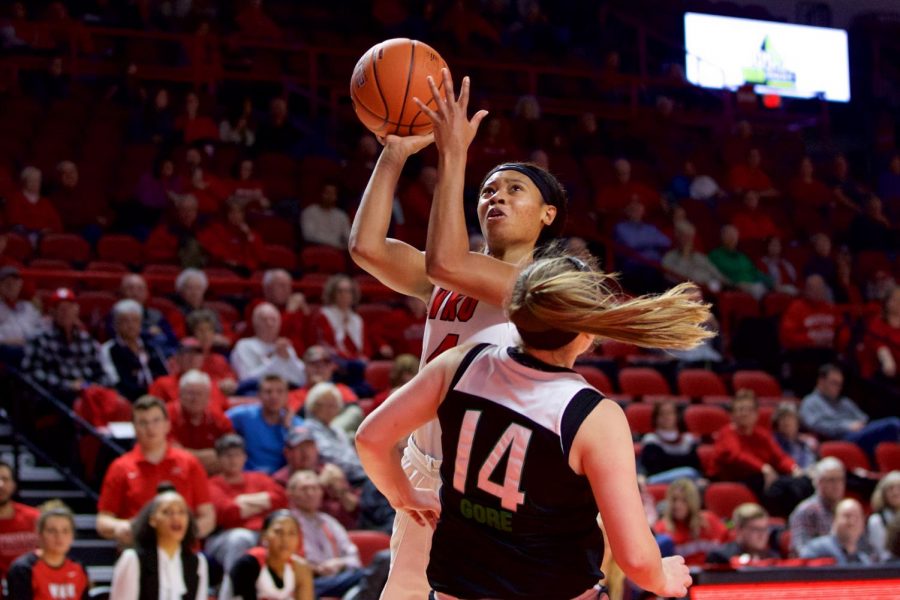 Redshirt junior guard Dee Givens takes a shot during the Lady Toppers' 85-55 victory over Marshall at Diddle Arena on Saturday.

The WKU women’s basketball team has rolled through Conference USA play so far, winning three straight contests and moving to above .500 overall for the first time in 2018-19.

Redshirt junior guard Dee Givens and sophomore guard Sherry Porter have guided WKU (9-8, 3-0 C-USA) to unprecedented heights, as the Lady Toppers’ backcourt duo has hit their stride on both ends of the floor during league action.

“Now, everybody knows we’ve played a really tough schedule and we’ve got some valuable lessons,” head coach Greg Collins said. “But what this team needed at this point was to learn how to win together and what winning looks like and what winning feels like together, this team. And so, with these three games, and it’s not a finished product, but this team is learning how they play together to win.”

Givens and Porter’s 3-point shooting has played a major role in WKU’s dominating victories as of late.

Progression has come gradually for Porter, but the young guard is now entrenched in the starting lineup and averages seven points per game for the Lady Toppers. Porter has turned a corner since C-USA play began, averaging 12 points per contest.

Porter’s improvement has certainly helped the Lady Toppers, as the entire team’s fortunes from deep have seen a noticeable uptick against C-USA opponents.

Through 17 regular season games, the Lady Toppers have shot 38 percent from beyond the arc (122-of-322) and average 7.2 made 3-pointers per contest.

When only C-USA matchups are considered, WKU’s percentages improve to 51 percent from deep (26-of-51) and 8.7 made 3-pointers per game.

Givens has starred all season, leading the team in scoring (18.6 points per game), shooting from beyond the arc (45 percent) and minutes (31.2 per game).

However, Givens was tasked with encouraging those around her rise to her level.

“Well, that’s something that Dee and I talked about earlier in the season,” Collins said. “It’s one thing to be a great player and score a lot on a team that doesn’t win. But if you want to be on a great team, you have to make your teammates better and she’s taken that to heart. And so, she’s done it in a variety of ways.”

“Every day I just talk to Sherry and just let her know that she has the ability to play defense and score,” Givens said. “You know, everybody now is probably keying on me and Meral and Lex and Raneem, so when she’s out there they probably not paying as much attention to her. So, just helping her get in the gym and shoot and get up extra shots to just help her build her confidence.”

The Lady Toppers put the ball in the basket with extreme efficiency against Marshall (8-8, 2-1 C-USA) on Jan. 12. WKU shot 55 percent from the floor and 59 percent from deep, which led to the Lady Toppers blasting their way to an 85-55 triumph inside Diddle Arena. The victory was WKU’s 22nd straight C-USA win at home.

Redshirt junior guard Alexis Brewer, who had been battling a lingering shoulder injury on her shooting arm, returned to the lineup against Marshall. Brewer added 14 points, two rebounds and two assists for the Lady Toppers in 24 minutes of game action.

Porter was a perfect 3-for-3 from deep, tallying a new career-high with 20 points.

“Again, you notice the points and so now she gets some attention because she scored points,” Collins said. “More importantly, she played 27 minutes, had zero turnovers. And so, she’s learning how to understand the game, make the right reads, find players and so when she does that… I think that shows as much maturity in that position because that point guard position is a pressured spot.”

Though Givens and Porter led the charge offensively, the duo has also continued to take tremendous pride in their performance on the defensive end.

“That’s very important for our team,” Brewer said. “Because everyone on the team has roles, so they know that that’s their role and they also can score too. So, that’s a big threat when we get out on the floor especially in conference because I will take [Givens and Porter] defensively over anyone in our conference.”

Givens nearly had a triple-double against the Thundering Herd, grabbing six rebounds and swiping a career-best eight steals. Givens has pocketed 54 steals so far this season, which leads C-USA and ranks ninth among all qualifying Division I players.

“I don’t really think we’re trying to send a message or anything,” Porter said. “I think that’s just our team identity. We’re a defensive team, so we don’t want to let up on anyone. I mean, I just think it’s the game of basketball, we just want to win and we don’t take it light on anyone so it’s just who we are.”

WKU will look to continue making strides during its first road trip of C-USA play.

The Lady Toppers’ excursion will tip off with a matchup against Florida International (3-14, 0-4 C-USA) in Miami on Jan. 17. The Panthers have posted a 3-9 record in games played at the Ocean Bank Convocation Center. However, FIU has fallen short in each of its last six games. WKU leads the all-time series 29-9 and has claimed five straight.

Two days later, the Lady Toppers will make the short journey to Boca Raton for a meeting with Florida Atlantic (3-14, 0-4 C-USA) on Jan. 19. FAU has struggled to defend its home court, posting a 2-8 mark. The Owls are losers of nine straight contests this season and eight straight games against WKU. WKU leads the all-time series 17-2.

WKU has not lost to FIU or FAU since joining C-USA, posting a 10-0 mark. The Lady Toppers should still be weary of overlooking either opponent, as the program has lost its opening road game in conference play during each of the last two seasons.

“[Our goal] is to guard the team and not get caught up in playing that record,” Collins said. “Because I think that’s the mistake you make, you look at the record and think, ‘Well, they’re struggling, not playing well.’ That’s why I said, they’re playing one game and that’s the game that we’re playing. And so, they’ve got some athletic kids, they play a lot of players… You really got to stay on your toes and be ready.”

The Lady Toppers will look to tally the program’s 27th road victory since joining C-USA Thursday at 10 a.m. in Miami, Florida. The game will be broadcast on beIN Sports.

Women’s basketball reporter Drake Kizer can be reached at 270-745-2653 and [email protected]. Follow him on Twitter at @drakekizer_.