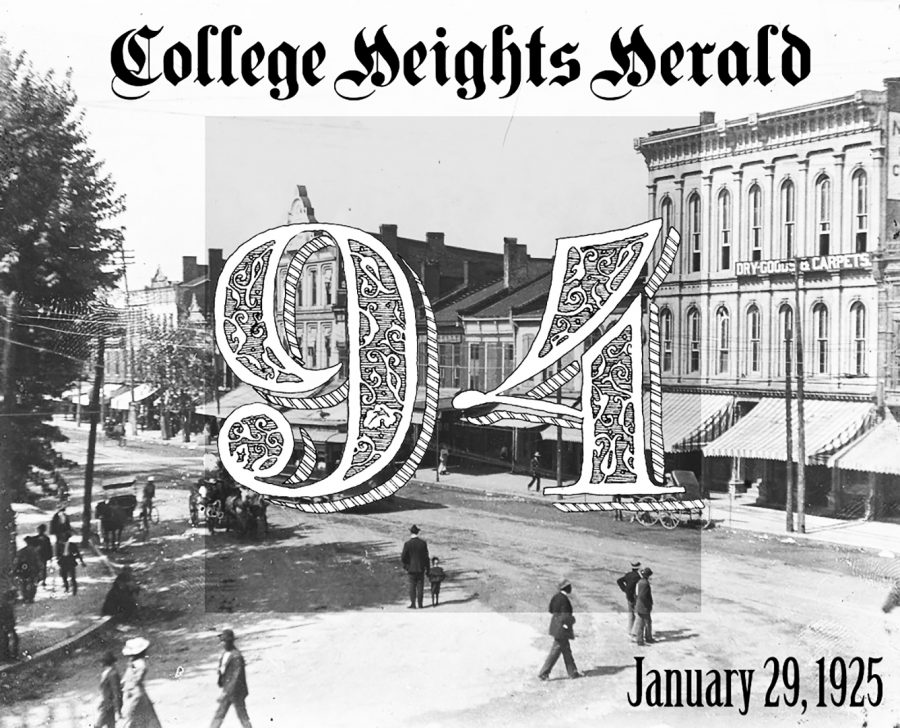 The Issue: Student journalists are often overlooked and under-supported by the communities they are trying to benefit. Accusations of amateurism, “fake news” and irrelevance wrongly discredit the impactful journalism done by students both at the Herald and across the country.

Our Stance: Student journalism matters and deserves the recognition and appreciation it has earned over time. More importantly, student journalists deserve an equal right to the freedom of the press which is so largely under attack today. As the Herald celebrates its 94th birthday, we also turn our attention to celebrating and demanding student press freedom today and every day with the first Student Press Freedom Day following on Wednesday.

Today is the College Heights Herald’s 94th birthday. Today, journalism is under more attack than it has been in generations. Student journalists are especially victimized by these attacks.

Perhaps the most significant challenge in American journalism history is concurrently unfolding with a president undermining its value seemingly every day and his supporters championing his vitriolic stance. Kentucky’s governor is no exception to this crowd of national leaders attacking journalism.

In some unfortunate ways, WKU fits into this crowd as well.

WKU’s School of Journalism & Broadcasting has been and remains one of the most accomplished and respected of its kind in the country.

But, even at universities and colleges with strong journalism schools, leadership can quickly lose sight of which battles are worth fighting.

As the Herald celebrates 94 years of serving WKU today and Student Press Freedom Day on Wednesday, another noteworthy date is also fast approaching.

Feb. 24 will mark the two-year anniversary of WKU’s lawsuit against the Herald over access to public records involving faculty sexual misconduct.

When the lawsuit began under former WKU President Gary Ransdell, the university claimed it had no choice but to take the matter to court in order to protect the student victims of the alleged sexual misconduct. Ransdell’s successor, President Timothy Caboni, doubled down on this stance when he arrived at WKU despite his chance to drop the lawsuit and hand over the records as Kentucky’s attorney general ordered them to be.

But the Herald’s open records request for these documents was never driven by an interest in revealing personal details about the victims. The request for these records redacted of any student information was aimed at trying to provide transparency to students about hidden wrongs which have taken place at WKU.

While WKU was busy denying these records and getting its attorneys in line for a legal battle against its own student newspaper, six other Kentucky universities released the same exact kinds of records without batting an eye.

Herald reporter Nicole Ares took the information from those employee sexual misconduct records and delivered a national-award-winning investigative story that exposed the disturbing pattern of sexual misconduct by faculty across the state’s universities. And she did it all without identifying a single student.

While WKU generally has a long track record of supporting its student journalists, praising their work and touting their accomplishments, the current litigation sadly isn’t the only exception to the rule. In 1988, WKU President Kern Alexander attempted to install faculty editors at the Herald to oversee students’ editorial content—essentially censorship. A loud response from WKU’s student body and an uprising from the Herald’s alumni helped walk Alexander off campus within a month.

The same kind of public support for student journalism still exists today, as evidenced by the thousands of dollars the Herald has received to help pay its legal bills since the lawsuit began.

The legal defense funds from both the Kentucky Press Association and the Society of Professional Journalists have donated a combined total that nearly reaches $30,000. Herald alumni have reached into their own pockets, as well, giving an amount close to $7,000.

These student press freedom predicaments could greatly benefit from campus-wide student support, but a national onslaught of criticism regarding journalism has trickled down to the college level, causing students to either lose sight of the importance of journalism or simply not care.

Reasons for that very kind of student support can be found in the work we do. There is no “fake news” in reporting on harassment by faculty members. There is no lack of importance in reporting how the government shutdown affects universities. There are no traces of limitations caused by “amateur journalism” in telling a student body about the extent of mold in campus dorms.

Even with the current lawsuit, WKU has largely been supportive of its journalism program and the Herald. Caboni takes the opportunity to sit down with the Herald editorial board for an hour at the beginning of each semester to provide a constructive dialogue about what’s happening at WKU.

The university takes pride in promoting the student journalists’ first-place finish in the national Hearst competition. It proudly celebrates the two national Pacemaker Awards won by the Herald in the past two years.

It also vigorously defends its stance in a lawsuit that could potentially unravel Kentucky’s Open Records laws if WKU comes out victorious.

Student press freedom is more than just another issue of debate. It’s a freedom that, if not protected, could have implications much larger and more damaging than a tainted public image for one university.