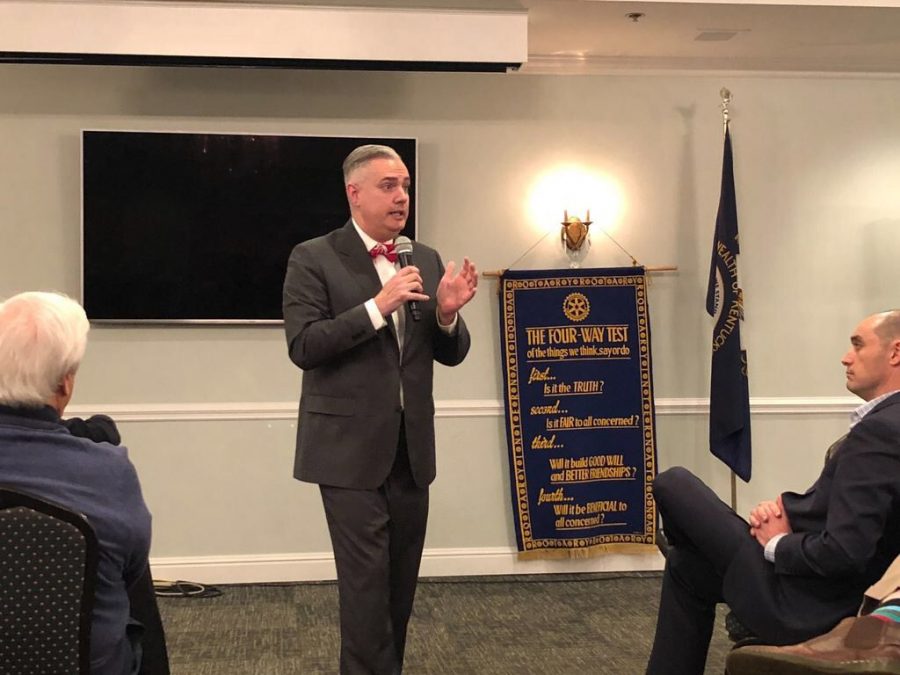 WKU President Timothy Caboni discussed plans to enhance one of WKU’s off-campus facilities into a hub for research and development while speaking to a packed house at the Bowling Green Rotary Club on Wednesday.

The Center for Research and Development is located on Campbell Lane and encompasses WKU’s Applied Research Centers and the Small Business Accelerator. It was designed to enhance economic development initiatives and creating an entrepreneurial community, according to the center’s homepage.

Caboni said there needed to be more emphasis placed on utilizing the research facility to suit the needs of entrepreneurs, research and a knowledge-based economy.

“That campus is wonderful,” Caboni said. “We have plenty of space. We just need good ideas to fill it up again.”

During his speech, Caboni discussed the importance of focusing on applied research at WKU as he would go into his third year as president. The push for applied research can be found in the university’s 10-year strategic plan.

Caboni said the university needed to work on keeping students in Bowling Green, helping faculty and students develop their ideas into investment opportunities and improving the connection between industry and science fields. He said by pursuing these goals, they will help support the regional economy and make WKU into a knowledge and information hub.

“Our engineering, our computer science, all of it has to be connected to industry,” Caboni said. “That means we have to position ourselves to ask and answer the questions the industry wants us to ask and answer. We haven’t done a great job at that right now.”

Caboni informed the Rotary Club members about the process in completing the university’s strategic plan, the creation of WKU’s Opportunity Fund, a new scholarship fund to support students, and the development of the university’s new budget model.

“Universities don’t run like businesses, as you all well know, so we’re trying to shift our budget model to one that incentivizes performance,” Caboni said.

Caboni also emphasized the importance of the university and its faculty and staff reaching out to WKU’s 27-county service region.

“We can’t turn our backs on the counties that we’re responsible for and we’re obligated to,” Caboni said.

A Rotary Club member asked how WKU could help adults who have a two-year degree who want to return to college for a bachelor’s degree and need to continue working. Caboni discussed the workforce administration online degree, which can be received in business, marketing or healthcare.

The program is online-only and can be completed in 18 months in the business, manufacturing or healthcare fields. It was developed for Community/Technical College graduates, adult learners and career-focused students, according to its website.

“I don’t think we do a good enough job as an institution in contacting people who may have gotten distracted or who have moved on, not knowing there’s another avenue for them,” Caboni said. “That’s one of the great things about higher education in this country. We’re in an institution or an industry of second chances.”

Caboni concluded his speech by bolstering his support for WKU and the Bowling Green community and thanking the Rotary Club members for allowing him to talk about the university’s plans as it moved forward.